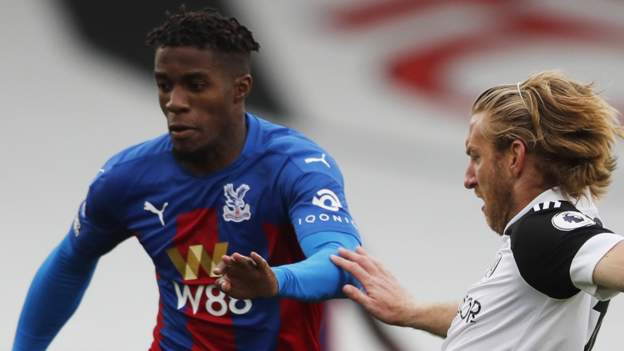 Wilfried Zaha scored and made another goal to inspire Crystal Palace to victory and inflict more misery on the Premier League’s bottom side Fulham.

Palace were on the back foot for much of the encounter, with the hosts having almost 70% possession, but netted twice on the counter-attack.

Zaha’s thumping strike was saved by Alphonse Areola but in the next move the Ivorian slipped a sublime reverse ball through to Jairo Riedewald to slot in the opener.

Fulham could have got back into the contest but Ademola Lookman twice hit the woodwork in the opening period, seeing an effort tipped onto the near post by Vicente Guaita and drilling a drive across goal which rattled the other post.

The visitors capitalised in the second half as Michy Batshuayi picked out Zaha for an easy finish at the back post.

Fulham were reduced to 10 men late on when substitute Aboubakar Kamara was shown a red card for raking his studs on the back of Ebere Eze’s leg, and skipper Tom Cairney’s stunning, long-range strike proved merely a consolation.

Palace made a huge leap up the table, jumping from 14th place to fifth, while Fulham remain rooted and stay in search of their first win.

Palace conceded late on against Brighton in their previous game and had to be content with a point, but the win over Fulham ends a run of three without victory.

After that home draw against the Seagulls, ex-Fulham manager Roy Hodgson took aim at his star man Zaha suggesting he could have contributed more and expects his player to “cause havoc”.

The former Manchester United man responded by doing just that against the Cottagers, showcasing dancing feet and superb skills to lead Palace to their third win of the campaign.

Zaha’s step-overs and darts forward often left Fulham full-back Ola Aina floundering, while one ‘scorpion kick’ pass to a team-mate was particularly outrageous, stretching out his leg and flicking the ball over his head.

And his menace turned into a match-winning contribution too, a delightful ‘no-look’ pass carved open the Fulham defence for Riedewald’s first Palace goal.

Zaha somehow nodded a free header wide from six yards out but did get his fifth goal this term by converting Batshuayi’s lay-off, although there was concern when he collided with the post in scoring.

He managed to finish the game and could have been on the scoresheet again in injury-time, but his effort from close range was ruled out for offside.

Where do you even start with Fulham?

Their six games played since returning to the top-flight has yielded just a solitary point from a possible 18 available and Scott Parker’s side look prime candidates for relegation.

They have netted just five times but Cairney’s brilliant, 95th-minute effort avoided the prospect of going their opening three games at Craven Cottage without a goal.

Their problems in defence are even more stark with three of the back four – Aina, Tosin Adarabioyo and Antonee Robinson – all signing this season and Fulham have shipped 14 goals, more than any other team in the top flight.

Fulham enjoy keeping the ball, they had 612 passes to Palace’s 331, but badly lack incisiveness in the final third.

Striker Aleksandar Mitrovic was left frustrated with a lack of service and on-loan Lookman looked sharp at times, but did not get on the ball enough in threatening positions.

Had his two shots that struck the posts gone in, it could well have been a different story.

Sub Kamara was sent on to add more attacking threat but ended up being dismissed – referee Graham Scott initially gave a yellow card which seemed fair, but changed his decision after watching the replay on the pitchside monitor.

Zaha king of the Palace – the stats

‘Gambling was as normal as breathing’

Music for monkeys and penguins in public