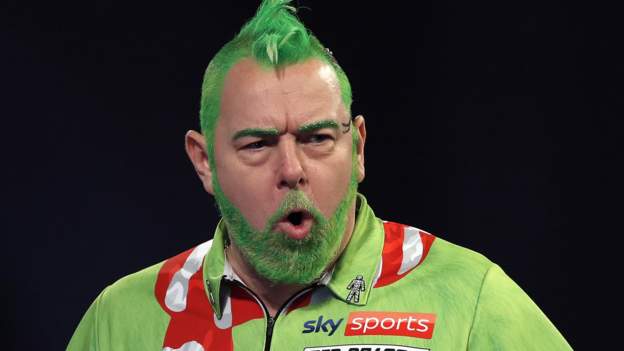 Peter Wright opened his PDC World Championship defence as he beat Steve West in an outfit inspired by film and children’s book character, the Grinch.

Wright saw off West in straightforward fashion, racking up a 3-1 victory.

“Cheer up everyone, it’s Christmas!,” Wright told Sky Sports after his win.

“Snakebite” Wright, who had a bye to the second round, will not now play again until the third round begins after Christmas.

West had already beaten Amit Gilitwala in the first round earlier in the evening, and briefly looked like making a fight of it after taking the third set on Wright’s throw before caving in.

“I am annoyed I am not playing before Christmas, I wanted to wear another Christmas outfit,” added Wright.

“Steve didn’t play his game like he can. It is hard when you have already played, he has been here hours and hours before me in preparation for his game. I got away with it. I have got stuff to work on.”

Find out how to get into darts with our special guide.

HSBC to close 82 branches this year

Americans in the UK: ‘It was a four-year soap opera’