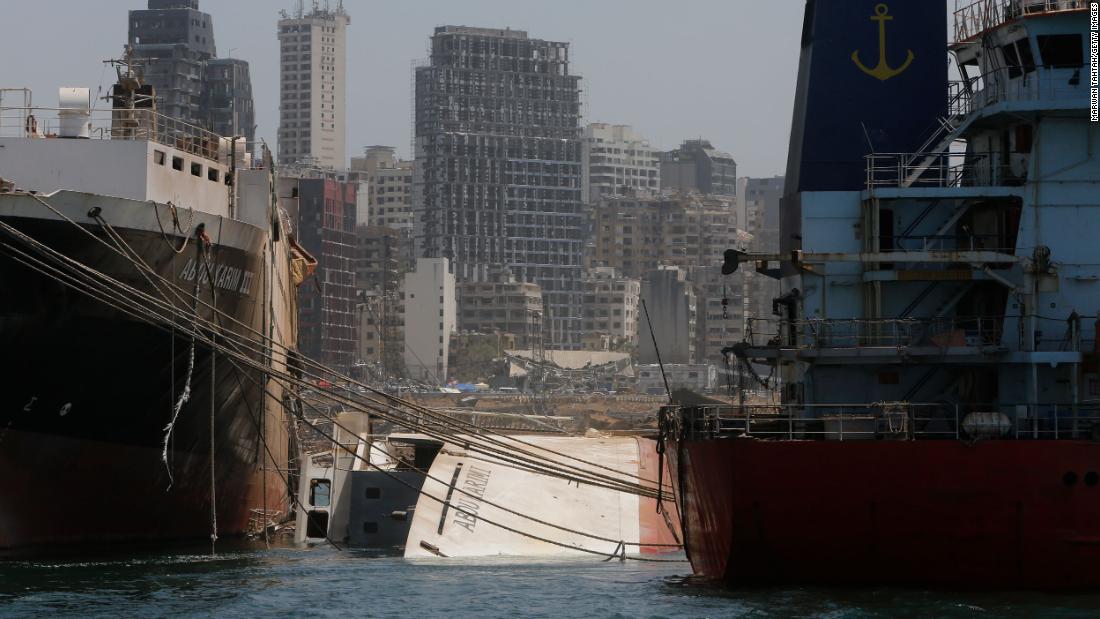 US President Donald Trump is expected to join representatives from Germany, Italy, Spain, China, Saudi Arabia, the United Nations, the European Council and others for the donors’ conference, according to the Elysee Palace.

Lebanon was already in dire economic straits before Tuesday’s blast wiped out Beirut’s port area and damaged buildings across the city. At least 158 people were killed and dozens more remain missing. More than 6,000 people were injured.

Protesters occupied the foreign ministry, the environment ministry and the economy ministry as they called for the ruling elite’s downfall. The Banking Association, which protesters blame for the country’s worsening banking crisis, was also taken over by demonstrators and set ablaze.

During a visit to Beirut on Thursday, Macron told a crowd that he would propose a “new political pact” to Lebanon’s embattled political class and vowed he would ensure aid was not lost to corruption.

“This aid, I guarantee it, won’t end up in corrupt hands. I will speak to all political forces to ask for a new pact,” Macron said, according to an Elysee Palace aide. “I am here today to propose a new political pact. If they [the political forces] are not able to keep this pact, I will take my responsibilities.”

The international community has already sent emergency medical and food supplies to the country and promised financial aid.

Parts of the demonstrations remained peaceful, while other parts were predominantly filled with angry protesters who faced off with security forces. Police fired tear gas and rubber bullets as protesters hurled stones and fireworks.

The security forces’ response did not appear to disperse many of the angry protesters. One woman who fell over as she stumbled over people running in her direction, said: “They bombed our city. I will go back in.” Her face soaked with tears, she picked up her belongings, as well as some stones, and headed back into the crowd.

“You survive an explosion in Beirut only to be teargassed,” said one man in his 20s as he held an onion to his mouth to mitigate the effects of the gas.

Some demonstrators erected mock gallows, a key symbol of the demonstrations. Effigies of prominent political leaders, including former Prime Minister Saad Hariri and Hezbollah chief Hassan Nasrallah, were hanged from nooses, in some of the most explicit signs of public outrage the country has seen in years.

Lebanon’s Prime Minister Hassan Diab vowed Saturday to hold early elections as his beleaguered government faces calls to step down. He said he would remain in government for two months until major parties can reach an agreement.

Diab also addressed the country’s ongoing political and economic crisis in a televised speech. “We need a national solution. We took over the country during an exceptional time… what happened was due to corruption and mismanagement,” he said.

Lebanon’s Minister of Information, Manal Abdel Samad, announced his resignation Sunday via a tweet from the Lebanese Ministry of Information.

“I apologize to the Lebanese because we were unable to meet their aspirations. Change remained elusive, and since reality did not match the ambitions, and after the horror of the Beirut disaster, I submit my resignation from the government,” Abdel Samad said in a statement, according to the state-run National News Agency (NNA).

Abdel Samad was part of a new cabinet appointed in January after the resignation of the previous government following mass protests last year.

Thousands of tons of ammonium nitrate are linked to the catastrophic explosion in Beirut’s port. Multiple government agencies in Lebanon were repeatedly warned about the substance, described by an analyst as a “floating bomb,” CNN learned.

Lebanese judge Ghassan El-Khoury will resume hearings with the heads of the security services on Monday to examine technical information around the circumstances of the explosion, NNA reported Sunday.

The military police continue to question security officials in Beirut’s port as part of investigations into the explosion, under the supervision of the Public Prosecution Office, according to NNA.

Authorities have detained 16 people in connection with the blast, including Director General of Lebanese Customs, Badri Daher, the head of Beirut Port, Hasan Kraytem and the former head of customs Chafic Merei.

Latest Clash Between China and Taiwan: A Fistfight in Fiji

An Earthquake, an Orphanage, and New Beginnings for Haitian Children in America