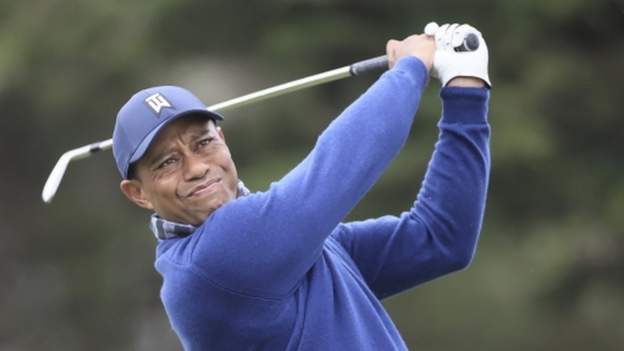 Tiger Woods shot his lowest opening round in a major since 2012 with a two-under-par 68 at the US PGA Championship in San Francisco.

Brooks Koepka, going for a third straight US PGA win, also carded a 66.

England’s Tom Lewis is two shots off the lead, with Ireland’s Shane Lowry, who won the last major – the Open – back in July 2019, a shot further back.

New world number one Justin Thomas, who played with Woods and McIlroy, opened with a one-over 71.

Lewis and Koepka finished in a tie for second at last weekend’s WGC-St Jude Invitational, which Justin Thomas won to replace Spain’s Jon Rahm at the top of the world rankings.

Woods back on familiar territory

After ending his 11-year wait for a major win in 2019, a back injury and the pandemic meant Woods spent five months out in 2020.

In his first event after the lockdown, the 44-year-old American tied for 40th at the Memorial Tournament last month, but he said on Tuesday he is enthusiastic about the changes he has made to his game while playing at home.

Chasing a record-equalling fifth US PGA win, he is back on familiar territory having played often at Harding Park as a junior and at Stanford University.

Woods has won both the professional events he has played there – the WGC-American Express Championship in 2005 and as part of the USA team during the 2009 Presidents Cup.

The most obvious change for Woods was that he had switched to a longer putter, and he said later: “I’ve been messing around with this putter for the better part of over a year.

“It’s difficult for me to bend over at times and most of the guys on the Champions Tour have gone to longer putters as they have gotten older.”

Starting on the par-five 10th, he made a birdie before claiming another on the 13th.

They were cancelled out by bogeys either side of the turn but Woods birdied three out of four holes on the back nine to complete a solid start.

‘It was there for the taking’ – what they said

Jason Day is still looking for his second major triumph after winning this event back in 2015, and the 32-year-old Australian came in off the back of three top-10 finishes after missing the cut at the Rocket Mortgage Classic.

“I finally had enough of feeling sorry for myself,” he said. “Sometimes you’ve just got to pull your pants up and just move on, you know?

“I feel like the momentum that I’ve had over the last three starts has kind of seeped into this week. I’ve been working very hard in the off-weeks to get my putting back to where it is. I feel like the game and the confidence is slowly coming around.”

Tiger Woods: “This golf course is all about hitting fairways. You get a ball in the rough, into the grain, there’s no chance you can get the ball to the green.

“I felt like I did a decent job of doing that, and the golf course is only going to get more difficult as the week goes on.”

Rory McIlroy: “I need to hit a few more fairways tomorrow [Friday] to try to attack some pins and not leave myself four and five-footers for par all day.

“But the course was there for the taking today – Jason Day shot five under and there have been a few four unders. I feel like I could have been a few shots lower but I grounded it out. With how I hit it on the back nine, even par actually wasn’t too bad.”