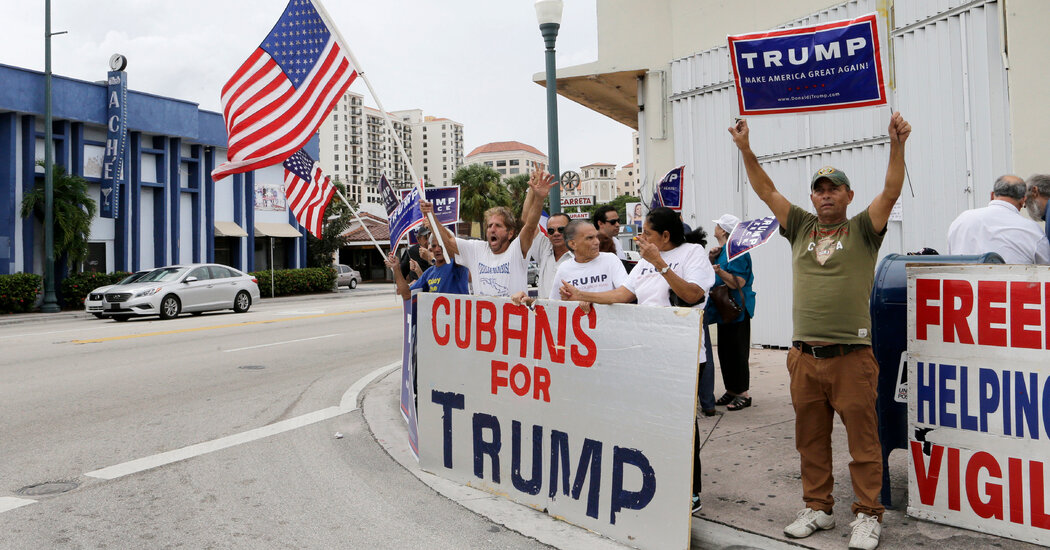 Another big factor in Mr. Trump’s success with Cuban-American voters has been his willingness to show up. Mr. Trump was mocked by some critics last month when he recalled a “beautiful” award he said he had received from veterans of the failed Bay of Pigs invasion. (No such award is known to exist.) But he should hardly have to prove his loyalty to the cause. The very first stop on Mr. Trump’s first foray into presidential campaigning in 1999 was the two-room Bay of Pigs Library and Museum in Miami’s Little Havana, where he turned up with his then-girlfriend, Melania Knauss. “My policy,” he said then, “is you have to keep pressure on Castro.”

As president, Mr. Trump has tried to ratchet up that pressure. In addition to blocking tourism, investment and trade, he all but shuttered the American Embassy in Havana, citing mysterious suspected attacks on diplomats there. Visas for Cubans to visit the United States were cut to 10,167 last year from a high of 41,001 in 2014. His administration also suspended a family reunification program that had authorized more than 125,000 Cubans to join relatives in the United States since 2007, and it sharply increased the deportation of Cuban asylum seekers.

Cuban-Americans’ response to those measures has been contradictory. In the F.I.U. poll, 71 percent of the respondents said the United States’ long-running economic embargo against Cuba hasn’t worked, yet 60 percent said it should remain in place. Many of them also said Washington’s Cuba policy was less important to them than other issues, including the economy, health care, race relations and even China policy.

Florida Democrats admitted that they have had little success in trying to focus attention on the collateral damage to Cubans from Mr. Trump’s policies. The Democrats may have done even less to argue the Obama administration’s case that closer contact with the United States is the best way to push the Cuban government toward greater political and economic freedom for the island.

“I think a lot of Democrats have concluded that while there are strong intellectual arguments for those initiatives, politically they just don’t pay off,” said Carlos Curbelo, a former Republican congressman from Miami.

Tim Golden, a former senior writer for The Times, is the editor at large at ProPublica.