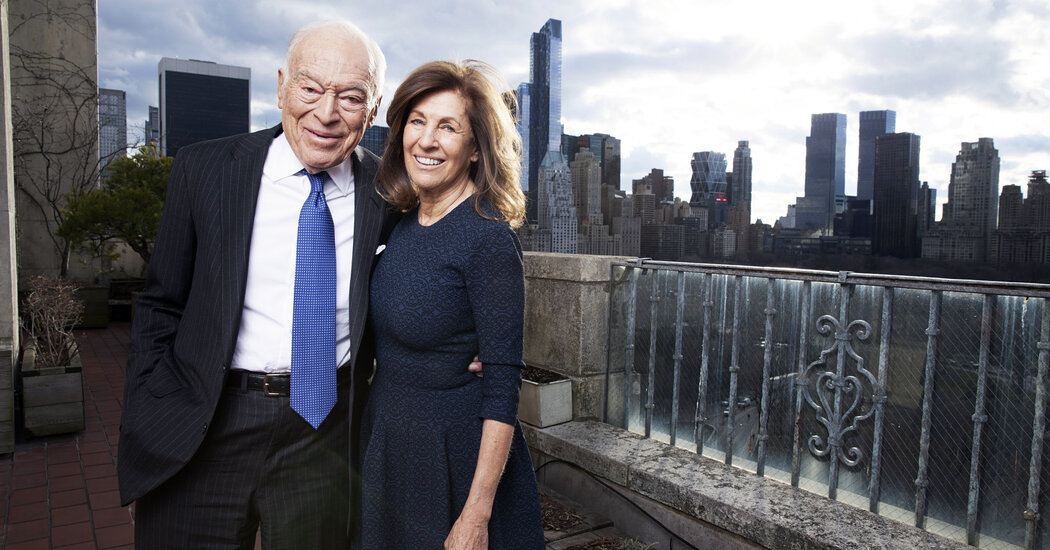 Why on God’s green earth would anyone choose to live somewhere besides New York City?

This, to Leonard A. Lauder, the philanthropist and chairman emeritus of the Estée Lauder Companies, the multibillion-dollar cosmetics corporation started by his parents, Joseph and Estée Lauder, is among the great mysteries of his lifetime.

Mr. Lauder, 87, has remained forever loyal to his city. As a child, he would visit museums free after school. As an adult, he paid it forward by endowing them with money ($131 million to the Whitney Museum, for example) and donating art (his $1.1 billion Cubism collection of 85 works by the likes of Georges Braque and Pablo Picasso has been promised to the Metropolitan Museum of Art).

He raised his children here with his wife, Evelyn H. Lauder, who died in 2011, and is now enjoying a new romantic chapter in New York with Judy Glickman Lauder, whom he married in 2015.

The couple has spent the pandemic in Mrs. Lauder’s house in Maine and their apartment in Manhattan, where he took a phone call to discuss why he will never give up on the city, which provides the backdrop for his new memoir, “The Company I Keep.”

The city is expensive, true, more so than when he was growing up just after the Depression and amid World War II. But, Mr. Lauder said, the value of today’s New York has been undersold: Museums offer inexpensive or free entertainment; city streets and parks are an explorer’s delight; and public schools, though lacking resources, still provide the formidable education of diversity, often using the neighborhood as a classroom in a way that can’t be replicated in a textbook.

“I love the New York City public school system,” said Mr. Lauder, who attended P.S. 87 and Bronx Science. His brother, Ronald S. Lauder, whose financial support of political candidates skews to the other side of the aisle from Leonard’s, first attended a private school before transferring to Bronx Science. “That was a step up,” Leonard said.

The following interview is an edited and condensed version of the conversation.

In your book, you write of roaming the city’s museums after school, as you waited for your parents to finish working. Museums were almost your babysitters.

Have you spent time in museums this year?

Yes! One of the things I love about the museums right now is this: When I was a little kid and I went to a museum during the week, the museum was empty. I had it all alone with only a few people around. Here I am in 2020. When you walk into a museum, it’s half empty also. It’s a totally different experience. You can dwell over looking at a picture or dwell over reading the explanation instead of people pushing by and saying, “Would you excuse me?”

Have you and Judy been able to enjoy the city at all? Have you ventured out or have you mostly been nesting in your apartment?

Covid-19 has changed our New York City life. We had been often going to dinner parties every night or every other night. No one does dinner parties anymore. Now, we’re doing dinners for four. Judy and I and one other couple. We’re eating mainly outdoors, sometimes getting very cold as a result. Eating at a restaurant, or we open up the doors to our penthouse and let the cold air roll in.

In your memoir you wrote about being a child in the city during World War II, the wearing of ID tags to identify bodies in case a school was bombed, and needing to pull down blackout shades so the city stayed dark at night. Are there any comparisons between those days of New York and New York right now?

Both eras had an enemy. In the air raids, it was, ‘Would the Germans bomb us?’ and with the virus, it’s ‘Will the virus catch us?’ We all had a common enemy then and today. Now, even when the drugs become available, it’s not going to be an overnight solution. It’s going to be slow, step by step, because we’re also living in the era of no trust. We don’t trust our drugs, we don’t trust our government, we don’t trust a lot of people. That is a difference from how we felt about our leadership in the 1940s. We trusted our leadership then. We have a challenge now. I won’t go much further than that.

What could Mayor Bill de Blasio be doing that he’s not doing?

Is there anyone that you have your eye on to be the next mayor?

Ray McGuire is a friend of mine, and I really admire him. He’s a very special man. I’ve known him for years. He had been a banker, and he was on my board at the Whitney Museum. Then he became the chairman of the Studio Museum in Harlem. He did a great job there as the chairman. I love that man.

Who are the power brokers of the future in New York City?

You know something? In truth, I don’t know. I’ll tell you why. Up until about four or five years ago, I was in the middle of everything. I used to eat three days a week in the Four Seasons restaurant. I knew everyone at every table. I don’t know the power brokers anymore. The people I knew are all dead. I can’t even name one.

When Mike Bloomberg was the mayor, he was the ultimate power broker. He would call me up on the phone and say, “I need this and this and this, OK?” No one has called me to say that they need my help. Yeah, I got a couple of calls trying to see if I could help David Geffen Hall open faster, because that was going to be a great move for New York, opening now rather than in two years from now. But mostly, I hear nothing. Haven’t changed my phone number, but they can’t find me.

When we do get a vaccine and get to the point when Broadway theaters open again and the opera and the ballet are back in session, what can our institutions do to make things more affordable for average New Yorkers?

I’ve given the Whitney Museum a nice endowment which allows them to be open and stay alive. What would happen if every theater had an endowment? That you could, therefore, run a musical with a minimum ticket of, say, $15. How can we take the grandness of New York and break it up into smaller pieces that we can all afford to support? I think that’s an interesting challenge.

What’s one of your favorite performances you’ve seen in New York City?

What do you miss about the New York of your childhood?

The public double-decker bus. For 10 cents, you could take a double-decker bus and sit up high. In the summertime, it was open air. It was so wonderful. I’d like to see them brought back again.

If you could eat at a restaurant of your youth that no longer exists, where would you have a meal and what would you get?

Probably the Tip-Toe Inn. It was on 86th Street. I’d have shrimp cocktail with lots of red cocktail sauce and an open-faced hot turkey sandwich with lots of cranberry sauce on the side, because they’d never give me enough cranberry sauce. For dessert, either chocolate ice cream or apple pie à la mode with vanilla ice cream. But I do also miss Schrafft’s, and I do miss a little chain called Child’s, and I do miss this restaurant called the Griddle. They made pancakes in the window so you could see.

You know, every one of those little places catered to a neighborhood, and there are still many, many neighborhood restaurants now, but I fear a lot of them have gone out of business. New York can reinvent itself if it makes it easier for people to launch restaurants again. That’s New York’s motto: reinvention.

This restaurant’s menu offers bluntly honest descriptions of the dishes