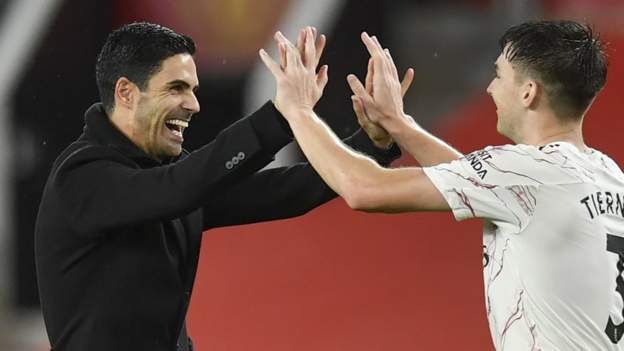 Arsenal’s first league win at Old Trafford for 14 years was more than just an impressive result for Gunners boss Mikel Arteta – it could turn out to be a defining moment for him.

It felt like the Spaniard was under a bit of pressure going into the weekend because his side had lost three of their past four league matches, but the way they beat Manchester United 1-0 on Sunday shows how far he has come in his 40 games in charge.

United’s attack, which was so impressive in their 5-0 win over RB Leipzig in midweek, could find no way through this time and you have to give Arteta credit for that. 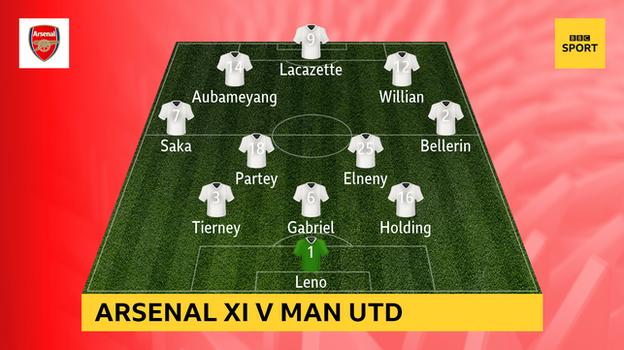 I loved the way Arsenal were set up, with two powerful players in the centre of midfield, and how disciplined the whole team were. There was a real steeliness about them whenever they were out of possession.

What will give the team even more confidence, though, was how well their plan worked when they came forward too. They were patient, passed the ball well, and caused United plenty of problems.

I was really impressed by the balance of the whole team and, overall, it was a performance that Arteta should be proud of.

‘Being solid is a good place to start’

It was in midfield where Arsenal took control of the game, and that was mainly down to Thomas Partey and Mohamed Elneny.

The Gunners have struggled in that area in the past, but Partey is looking like a very good signing and Elneny has made such an improvement that it feels like he is a new addition too.

Elneny appeared to be on his way out of the club before Arteta took charge at the end of last year. I like the way Arteta has given him another opportunity – and also how the Egyptian has taken it.

It is still early days, but Partey and Elneny worked really well together here and it could be the start of a really productive partnership, at least in the short term.

There was talk that Arteta wanted Lyon midfielder Houssem Aouar in the last transfer window as well as Partey.

Aouar might provide a bit more creativity in there too in the future but, for now, being solid is a good place to start.

I think it is interesting that Arsenal have now played Liverpool, Manchester City and United away from home this season and still have the best defensive record in the top flight – only seven goals conceded in seven games.

That’s down to Arteta’s influence. Yes, they lost at Anfield and at Etihad Stadium but their defence clearly has more protection now, and there has been a change of culture to go with it.

There is a desire from every Arsenal player to work and scrap and get behind the ball, all over the pitch. That is how you get wins at these places, and we saw that approach work on Sunday.

‘You need enough quality to pose a threat too’

With two solid midfield players in the middle, you instantly start to look more secure at the back. United were constantly giving the ball away, especially in the first half, but that was because there was nowhere for them to go.

Arsenal had Partey and Elneny pressing, plus Alexandre Lacazette sitting on Fred, United’s deep-lying midfielder, to block passes to him and pinch the ball off him.

That was all part of Arteta’s plan, and it meant United never really had the options they wanted when they attacked. 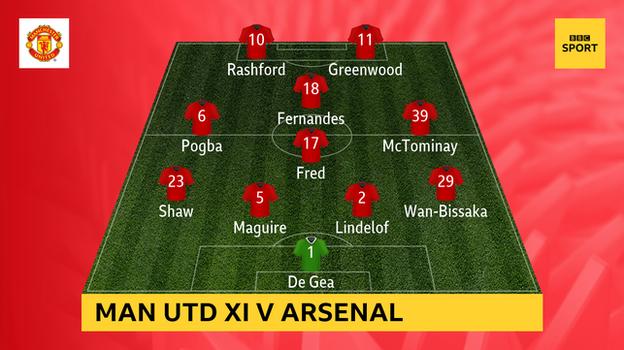 In the first half, Marcus Rashford played a brilliant ball from right to left, into the Arsenal area. Mason Greenwood got on the end of it and forced a good save from Bernd Leno from a tight angle.

But that was the only time United got in behind the Arsenal wing-backs, and it took the pass of the match to do it.

Apart from that, when I was looking at United, it was hard to work out what they were hoping to achieve other than trying to keep Arsenal out.

By contrast, the Gunners had enough quality on the ball to pose a threat too.

It felt like they had targeted United’s left side – Hector Bellerin put in some dangerous balls and the home side did not seem to be able to cope down that flank.

Arteta has been criticised when his side have not created enough chances in the past but, this time, they did find a way of getting at United, and they should have won by a bigger margin.