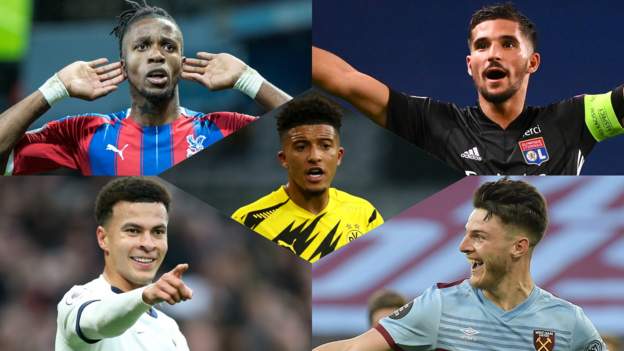 After 10 weeks of rumours, speculation and eye-catching deals, there remains plenty to be cleared up on the summer transfer window’s deadline day.

The effects of the coronavirus pandemic have limited the spending powers of many, while others have still been able to splash out on big-money signings.

But what else could still be in store?

The window officially closes at 23:00 BST on Monday, 5 October – though a domestic-only window will continue to run until 17:00 BST on 16 October.

Here are some of the names in the frame for a move on deadline day.

Perhaps the biggest question on deadline day is whether Manchester United are prepared to improve on their reportedly rejected £91.3m bid for number one transfer target Jadon Sancho.

United have been heavily linked with Borussia Dortmund’s England forward throughout the summer window, despite the Bundesliga side setting their own deadline of 10 August for a deal to be agreed.

Dortmund are believed to want more than £100m for Sancho – but even if United meet their demands at this late stage, will Dortmund be willing to sell with limited time to find a replacement?

French champions Paris St-Germain are interested in Dele Alli but Tottenham sources insist they expect the England forward to stay and fight for his place.

When asked about Alli’s future, Mourinho simply responded that he wanted “a balanced squad” and more recently added that he has a “squad with numbers that are very difficult to manage”. With PSG hovering, could Alli be the one to make way?

One transfer rumour to gather pace in the final weeks of the transfer window is that suggesting West Ham midfielder Declan Rice will join Chelsea, as Frank Lampard reportedly seeks to add one final signing at the end of a busy window at Stamford Bridge.

However, West Ham assistant boss Alan Irvine insisted last weekend that the England international was “extremely happy” at the club, and that it would require a sizeable offer for a sale to be considered at this late stage.

With more than £200m spent on players this summer, could Chelsea add one more big-money signing as they look to bridge last season’s gap to Liverpool and Manchester City?

Crystal Palace manager Roy Hodgson admitted earlier in September that forward Wilfried Zaha “hopes a big club comes in and takes him from us” but is adamant the club will not accept a late bid for their star player.

The Ivory Coast international was linked with moves to Arsenal and Everton in 2019, but there have been no official attempts to lure him away from Selhurst Park this time around.

Zaha has scored three goals in a promising start to the season, so will anyone be tempted to move for the 27-year-old’s services?

With several senior players absent through injury, Burnley and Sean Dyche are desperate for reinforcements.

The Clarets made contact with Liverpool over a potential move for Wales international Harry Wilson in September, with the Reds not open to a loan deal after the young winger spent last season at Bournemouth.

Wilson has been linked with several clubs since his spell at Bournemouth ended, including promoted side Leeds United.

Lyon president Jean-Michel Aulas tweeted in September to confirm Arsenal had fallen short of his valuation with a bid for 22-year-old France midfielder Houssem Aouar.

In response, the Gunners are reportedly prepared to increase their offer to Lyon, with Juventus and PSG also thought to be keen on Aouar.

Aulas confirmed to L’Equipe that three clubs with Champions League pedigree are keen on the France Under-21 international, who is under contract until 2023.

Any potential deal for Aouar would almost certainly confirm Mesut Ozil’s time at Emirates Stadium had reached its end.

The Germany midfielder, 31, moved from Real Madrid for £42.4m in September 2013 and has fallen out of favour under current manager Mikel Arteta.

Ozil insisted in August he will remain at the club “through to the last day” of his contract which expires in June 2021, adding: “I’ll decide when I go.”

The Italian ruled out a late move for the 22-year-old – who moved to Old Trafford from Swansea for £15m last summer – but manager Marcelo Bielsa still wants to add a winger this window.

Movement here could depend on Manchester United’s ability to sign a new forward.

Having been left out of the side for Liverpool’s Carabao Cup tie against Arsenal, Swiss midfielder Xherdan Shaqiri looks destined to leave Anfield sooner or later in search of regular minutes.

Manager Jurgen Klopp confirmed Shaqiri was not absent because of injury or disciplinary reasons as he appears to work on securing a move away.

Serie A side Lazio and Europa League champions Sevilla were thought to be keen on the 28-year-old in January and could yet return with late bids on Monday.

Burnley rejected a £30m offer from Premier League rivals Leicester City in September, having already turned down three bids from West Ham, with the last also thought to be around £30m.

The England centre-back made his first appearance of the season in Wednesday’s EFL Cup defeat by Manchester City following a toe injury – and, ahead of Saturday’s game against Newcastle, manager Dyche appeared confident of keeping hold of one of his key players.

After team-mate Ross Barkley was allowed to leave for Aston Villa on loan, Ruben Loftus-Cheek could be another Chelsea player to seek at least a temporary move following the Blues’ influx of new names.

The England international midfielder is in need of minutes following his return from an Achilles injury and a loan move this season may suit both club and player – and potentially West Ham, should Rice agitate for a transfer.

Another player who could depart Stamford Bridge is Marcos Alonso after Chelsea brought in left-back Ben Chilwell from Leicester for £45m.

Former Chelsea manager and current Inter Milan boss Antonio Conte is said to be interested in taking the Spain international to Serie A and may well get his wish with the Blues seeking to offload players.

You can add Antonio Rudiger to that list, too. The Germany centre-back has been snubbed by Lampard since the start of the new season but remains highly regarded in Germany and around Europe.

However, Rudiger may not need to travel far for his solution, with London rivals Tottenham leading the way to land his services before the window shuts. 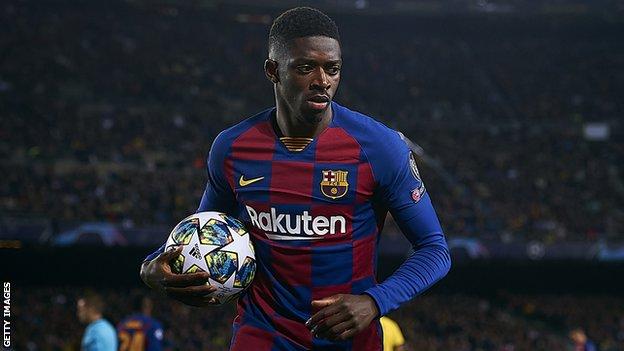 Should Manchester United fail to make progress with number one target Sancho as the deadline day clock ticks down, they may seek an alternative in Barcelona’s Dembele.

The France forward has featured just once for Barcelona under new manager Ronald Koeman this season – and Koeman said “it is up to what he thinks” when recently questioned on Dembele’s future.

Everton manager Carlo Ancelotti has told Yannick Bolasie he does not have room for him in his squad after spending big on a new midfield in James Rodriguez, Abdoulaye Doucoure and Allan this summer.

The Italian said the winger, who has not featured this season, was welcome to stay and train with the Toffees should he be unable to find a new club – and Bolasie is running out of time if he is to avoid spending a season watching from the stands.