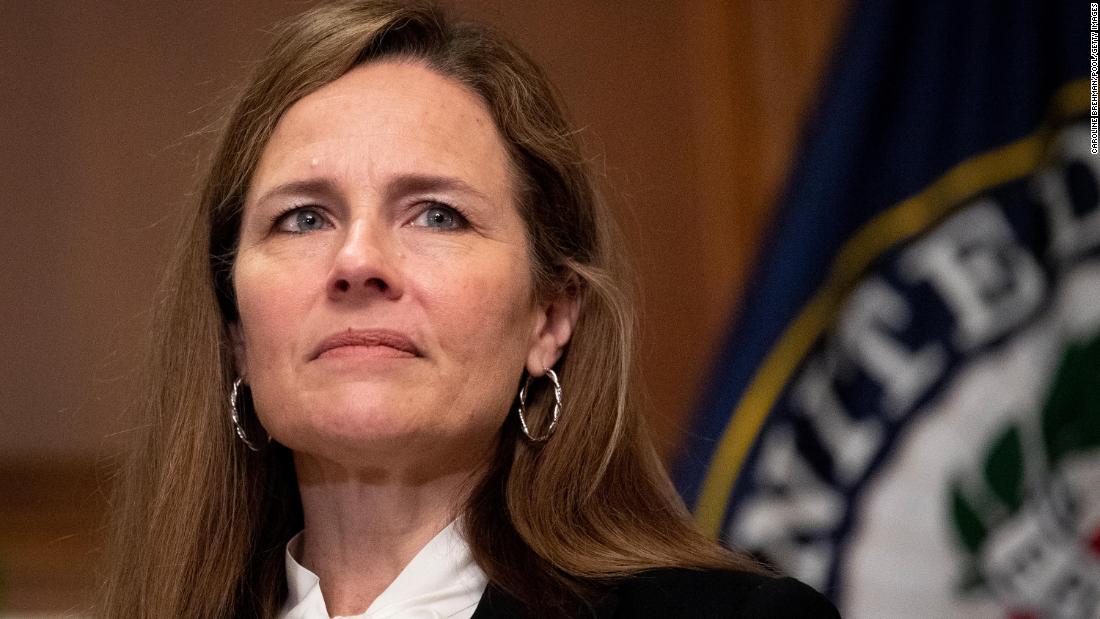 The White House ceremony comes a week before Election Day and a month after a White House Rose Garden event to announce Barrett’s nomination — which has been labeled by public health experts as a coronavirus superspreader event.

At least a dozen people who were at the announcement in September confirmed they had contracted the coronavirus shortly after their attendance. But unlike the Rose Garden event, when many attendees went maskless and social distancing went largely unobserved, a White House official told CNN that the audience at Monday’s swearing-in will be socially distanced and masks will be required.

Like at most events at the White House, the official said individuals near Trump will be tested for coronavirus beforehand. White House chief of staff Mark Meadows also said that the swearing-in will be outdoors.

President Donald Trump, who contracted and recovered from the coronavirus in the weeks after the Barrett nomination announcement event, downplayed the size of Monday night’s event. Asked whether the White House would be holding a large event at the White House for Barrett’s swearing-in, Trump said: “No, not a large event. Just a nice event.”

But Republican senators are split about whether they will attend.

Sen. Kevin Cramer of North Dakota, whose state has recently seen the highest transmission rate in the country, said he plans to go, and expects there will be adequate protective measures.

“It sounds like it’s an outdoor event. I mean, that would certainly help that. Obviously, a lot more room, as well as the clean air, so I’m not, I’m not overly concerned. I’m certainly not concerned for myself. I’ll do my part,” Cramer said.

Others, such as Sen. Todd Young of Indiana, had planned to go but are wavering.

“I RSVP’d yes, but I’m reconsidering that,” he said.

Florida Sen. Rick Scott and South Carolina Sen. Tim Scott were among those who said they were undecided.

Sens. Deb Fischer of Nebraska and Richard Shelby of Alabama plan to go home after the confirmation vote. And Texas Sen. Ted Cruz, a member of the Senate Judiciary Committee and ardent advocate for conservative judges, will not attend the event, citing a scheduling conflict.

It’s not clear whether Senate Majority Leader Mitch McConnell, who has criticized the White House’s internal practices to prevent the spread of Covid-19, will attend.

And while the White House has maintained that the US is rounding the corner of the coronavirus pandemic, it’s still spreading among key staffers. Over the weekend, at least five aides to Vice President Mike Pence tested positive for Covid-19. Pence has flouted public health guidelines by continuing to campaign, but is taking precautions on the road.

Barrett will solidify a 6-3 conservative majority on the Supreme Court — a major victory for Republicans that will have dramatic implications on decisions made by the high court for decades.

Barrett is expected to join as the justices are ready to take action on a number of important petitions, including several related to next week’s election.

Action on cases related to the President’s taxes and abortion also await her in her first week on the bench.

Mark Kelly to be sworn in as US senator, flipping Arizona seat from red to blue

English whisky? A spirits pioneer tries to survive the pandemic and Brexit