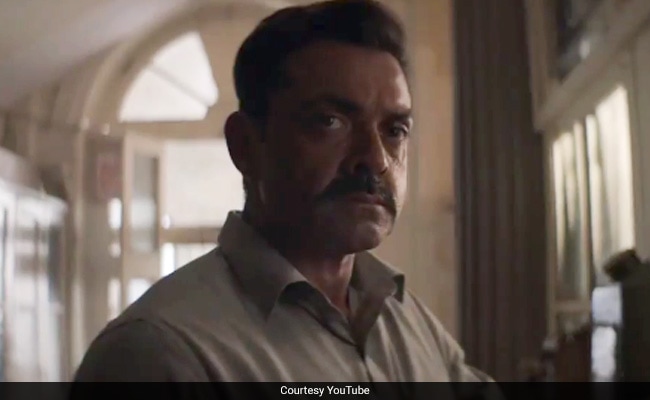 Bobby Deol in a still from Class Of ’83 (courtesy YouTube)

Last seen in Zero, Shah Rukh Khan is busy with his production ventures and the upcoming cop drama Class Of ’83 is one among them. Class Of ’83 is the first Netflix film produced by Shah Rukh’s Red Chillies Entertainment. Shah Rukh previously collaborated with Netflix for web-shows such as Bard Of Blood and Betaal. Sharing the trailer of the new Netflix film, Shah Rukh had everything good to say about lead actor Bobby Deol. Shah Rukh also extended his shout out to the new actors who co-star with Bobby Deol in Class Of ’83: “Loved Bobby Deol in Class Of ’83 and the new talents Hitesh Bhojraj, Bhupendra Jadawat, Sameer Para, Ninad Mahajani, Prithvik Pratap as young, fearless cadets are fabulous in the film! Hope you enjoy the Class Of ’83 trailer.”

Class Of ’83 stars Bobby Deol as a dedicated policeman Vijay Singh, who lost his family in an unfortunate incident and ever since, is haunted by his past. Vijay Singh makes a comeback, stronger and fiercer, by training a bunch of aspiring Mumbai Police candidates with his aim to take down a notorious gangster in the Mumbai of 1983. Directed by Atul Sabharwal, Class Of ’83 is all set to premiere on Netflix on August 21.

Bobby Deol, whose career graph witnessed a low in the 2000s, made an impactful comeback of sorts with Salman Khan’s Race 3 in 2018 after which he also featured in films such as Yamla Pagla Deewana: Phir Se and Housefull 4.