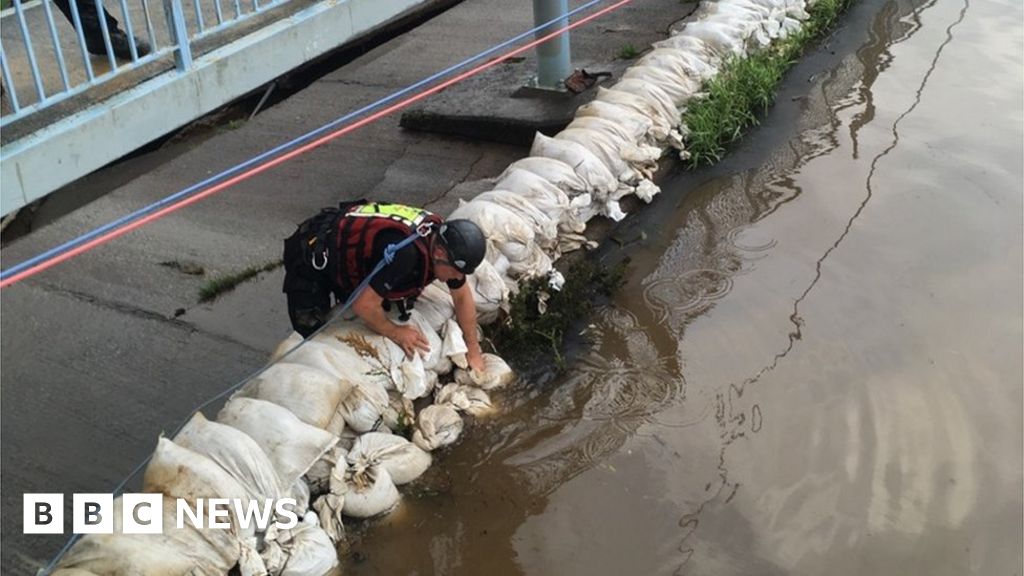 A police officer hailed as a hero for risking his life to stop a dam bursting in Whaley Bridge said he was initially called an “idiot” by his wife.

PC Geoff Marshall was among the first emergency service workers to arrive after part of the dam at Toddbrook Reservoir came away a year ago.

He climbed down to the damaged section and placed hundreds of sandbags to stop more water entering the structure.

When he arrived home, his wife was shocked by his bravery but also proud.

About 1,500 residents were ordered to leave the Derbyshire town of Whaley Bridge on 1 August 2019 when a large section of the dam’s spillway broke away, leading to major concerns the whole structure could collapse and flood the town.

They were allowed home six days later following a major effort from the emergency services to bring water levels down and secure the dam.

On the day of the evacuation, PC Marshall said, he was the final link in a chain of officers working to place 300 sandbags at the top of the dam wall to stop water getting in.

They had been told if they spotted any whirlpools they should evacuate immediately as a major collapse could be imminent.

“We’d been told if we did nothing then it [the dam] would go, although it could still go anyway,” he said.

“I didn’t feel scared. I knew the risk was huge but it was a job to do.”

Derbyshire’s Deputy Chief Constable Rachel Swann told the Independent she had been briefed by engineers it was the single act of laying the sandbags that probably saved the reservoir from collapse.

Derbyshire Police Federation chairman Tony Wetton, who nominated PC Marshall for a bravery award, said: “The sandbagging needed to be performed by a member of staff on the actual spillway and others on a metal bridge passing the bags down.

“Engineers briefed that should certain tell-tale signs be visible either on the water or on the downstream side, they’d have between 45 seconds and a minute to evacuate the entire area before the dam wall would collapse beneath their feet.

“In reality, were the dam to have failed, it’s highly unlikely any of those involved in the sandbagging operation would have survived.

But when PC Marshall arrived home, he did not exactly receive a hero’s welcome from his wife.

“But she was proud, absolutely. As a team we’re all very proud of what we did.”

“Yes I’ve been singled out and that’s great. I was the one on the dam but it was a massive team effort on the night. The whole team was phenomenal.”