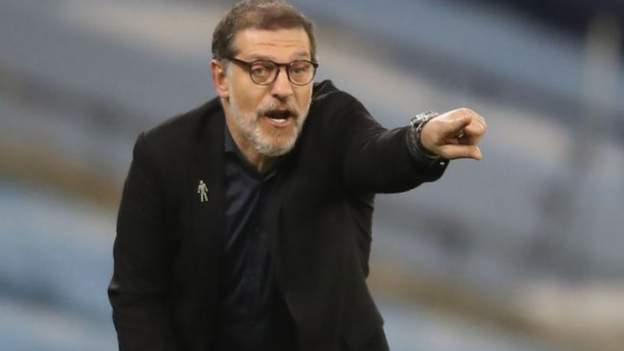 West Brom manager Slaven Bilic could be sacked as early as Wednesday.

It is understood the Baggies hierarchy have been deliberating whether to make a change for a number of weeks as the club struggles to cope with life back into the Premier League.

Senior figures connected with the club had cautioned against it, and pleaded for Bilic, 52, to be given more time.

However, it is thought the club’s Chinese ownership is veering towards a different conclusion.

When Bilic was asked about his future following the draw at Etihad Stadium, he said: “I’m very calm, I love my job, I enjoy it and I’m working hard for myself and my staff for the club.

“Everything else out of my control. I’m just doing my best. I’m not bothered what’s happening behind the scenes, I don’t care.”

Bilic has been in charge at The Hawthorns since 2019 when he replaced Darren Moore, and guided West Brom back into the Premier League during his first season in charge.

However, promotion was secured on the final day despite Albion ending the season with three points from their final four games.

There was then uncertainty behind the scenes as the financial investment Bilic wanted failed to materialise.

Although the club did spend £45m, a large portion of that was on the permanent signing of players who had spent last season there on loan.

Bilic then spent £15m on Huddersfield striker Karlan Grant, who has scored once in 10 appearances and wasted a glorious chance against City when the score was still 0-0.

Uncertainty over Bilic’s future has been fuelled by his admission there have been no talks over a new contract, with his current deal due to expire in the summer.

West Brom did not respond to calls about Bilic on Tuesday evening.