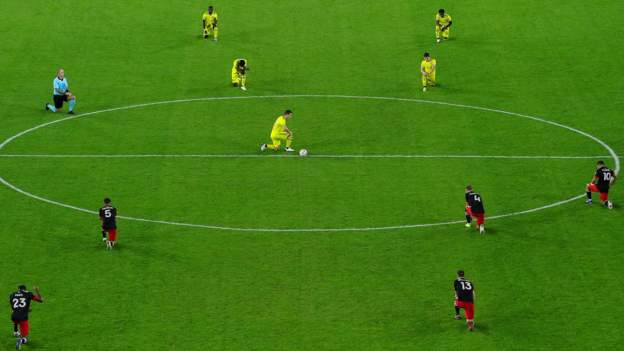 “I would like to make the actions of those fans who do boo the taking of the knee completely irrelevant.”

Colchester United chairman Robbie Cowling has taken a stance after a minority of the 1,000 fans in attendance booed when players took the knee before Saturday’s home win against Grimsby Town.

In a powerful and heartfelt statement Cowling explained why players take the knee for racial inequality, encouraged supporters to applaud the gesture and says fans who boo are “not welcome” at the club.

He has offered to give refunds to season ticket holders who feel they cannot attend games because of their feelings about the gesture.

“It would be very disappointing if anyone does decide to boo again,” he said.

Some have defended the booing, saying it is not motivated by racism, but instead in opposition to the Black Lives Matter political organisation.

Cowling, who says U’s midfielder Callum Harriot had described the purpose of the gesture to him, explained the club’s position: “Those that take the knee want to highlight that all lives should be valued and should not be treated inhumanely or inferior to others just because of their race.

“It is undeniable that black and other ethnic minority people are still the victims of racism, and the black footballers and staff at Colchester United feel that they are in a position of privilege that has been fought for through the blood and sweat of their ancestors.

“A position that in 2020 the average black person is still not afforded.

“Those taking the knee, and supporting the taking of the knee, not only shows their willingness to support the drive to eradicate racial oppression but force it to be a talking point even when it’s uncomfortable.

“Undeniably, taking the knee is a fundamental catalyst in pushing the conversation, and thus the necessary changes, forward.”

Cowling said that, given his explanation, fans should “at the very least stay silent during future games” as players take a knee.

“Alternatively, they should just stay away from our club because anyone that still wants to boo now that I have explained the purpose and importance of the taking of the knee is not welcome at our club.

“I will be happy to refund anyone for the remaining value of their season permit if that is the reason they feel they can no longer attend our games.”

Players, officials and staff at games in the Premier League and English Football League have taken a knee before kick-off since football’s return in June to show their support for the Black Lives Matter movement for racial equality.

The gesture first attracted global attention in 2016 when former NFL quarter-back Colin Kaepernick began kneeling during the US national anthem.

In June, the Premier League explained their campaign was not an endorsement of a political movement.

In September, Queens Park Rangers director of football Les Ferdinand said the impact of taking a knee “has been diluted”.

Saturday’s match was the first time that fans have been allowed back into Colchester’s JobServe Community Stadium since national lockdown restrictions were lifted on 2 December.

Harriott tweeted following the match to denounce those who booed and said he was “disappointed” in their behaviour.

The incident came on the same day that some Millwall fans also booed taking a knee before their defeat by Derby County in the Championship.

The incident at The Den was condemned by the Football Association and anti-discrimination body Kick It Out.

“Going forward I would like to make the actions of those fans who do boo the taking of the knee completely irrelevant,” Cowling added.

“For every game where the players choose to take the knee, I would like all of our fans to join me in applauding this gesture to ensure our players know we fully support them.”