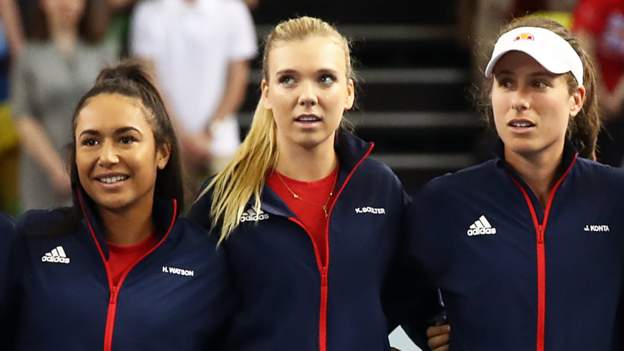 Heather Watson expressed concerns about the future of British tennis after she became the final Briton to be knocked out in the French Open singles.

British number two Watson’s 7-6 (7-4) 6-4 defeat by France’s Fiona Ferro means there are no Britons in a Grand Slam second round for the first time since the same tournament in 2013.

“I feel like we’ve got a good little group of players right now, but little. I don’t see who’s going to be top 50.

“I think personally that more players need to get help rather than just helping your selected players.”

The Lawn Tennis Association (LTA) supports a small number of players through two national academies in Stirling and Loughborough but Watson believes giving financial aid to a larger group would be better.

“I feel like the more people you help, the more competition there will be,” she continued.

“It’s not just the talented people that get through. If you give the hard workers an opportunity, too, you’ll have more of a pool of players.”

In Jack Draper and Emma Raducanu, who are 18 and 17 respectively, Britain has two outstanding prospects, but the British Tour events staged over the summer showed up a lack of depth on the women’s side in particular.

Asked if she would consider getting involved with the LTA at the end of her career in a bid to help change things, Watson said: “I definitely wouldn’t want to get involved because of the politics.

“There’s loads of politics involved. If I’m honest, I don’t think my voice would be heard anyway.”

After winning in Acapulco in February, Watson has lost all her matches since the tour resumed in August and said she would have blood tests after suffering from dizziness for several weeks.

Just like Johanna Konta, Dan Evans and Cameron Norrie, Heather Watson had her opportunities, but ultimately was not quite sharp enough to beat a player who won a title on clay just last month.

Watson was a break up in either set, but has got out of the habit of winning recently. That’s now six defeats in a row, either side of the tour’s suspension, since winning a fourth WTA title in Acapulco in February.

And so for the first time since the French Open of 2013, no British singles players have survived the first round of a Grand Slam.

Each has an individual story to tell, but it has been a disappointing Grand Slam year.

Only Norrie, at the US Open, managed to reach the third round.

If Konta over-performed last year, then she has under-performed this time around. And although Evans has played very well in the tournaments possible on the ATP Tour, he has not been able to make a mark on the Slams in the way he would like.

McGregor and Poirier weigh-in before UFC 257 in Abu Dhabi