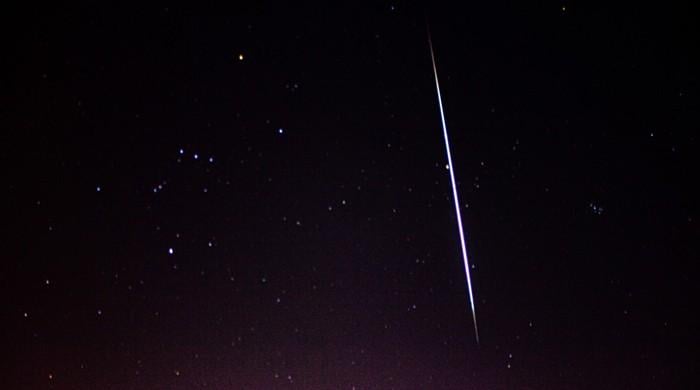 Engineer Absar Ahmed Khan, a faculty member at the Institute of Space Science and Technology University of Karachi Engineer, captured a photo of a meteor shower on the night of December 13, 2020, the varsity said in a statement.

Khan shared that a meteor shower is a celestial event in which several meteors are observed to radiate or originate, from one point in the night sky. Pakistan lies in the Northern Hemisphere and a proper view of the phenomena was visible last night.

Khan mentioned that they are often called shooting stars. According to him, the Geminid Meteor Shower, popularly known as the King of Meteor Showers graced the night sky on December 13 and is expected to continue on the night of December 14 as well.

“As these particular showers originate from the Geminid Constellation that is why they are named after that,” he said.

Khan said that the Geminid shower rate was even better this year, as the shower’s peak overlaps with a nearly new moon, so there were darker skies and no moonlight to wash out the fainter meteors.

However, he pointed out that since Karachi is heavily polluted by light, it gets difficult to capture these meteor showers on camera, but they were seen from the naked eye by constantly staring at the vast sky.

Engineer Khan said that various attempts have been made to capture at least one visible shower by the KU ISST. These meteor showers plunge into the Earth’s atmosphere at 22 miles per second and when they vaporize in the streaks, we call them “shooting stars”.