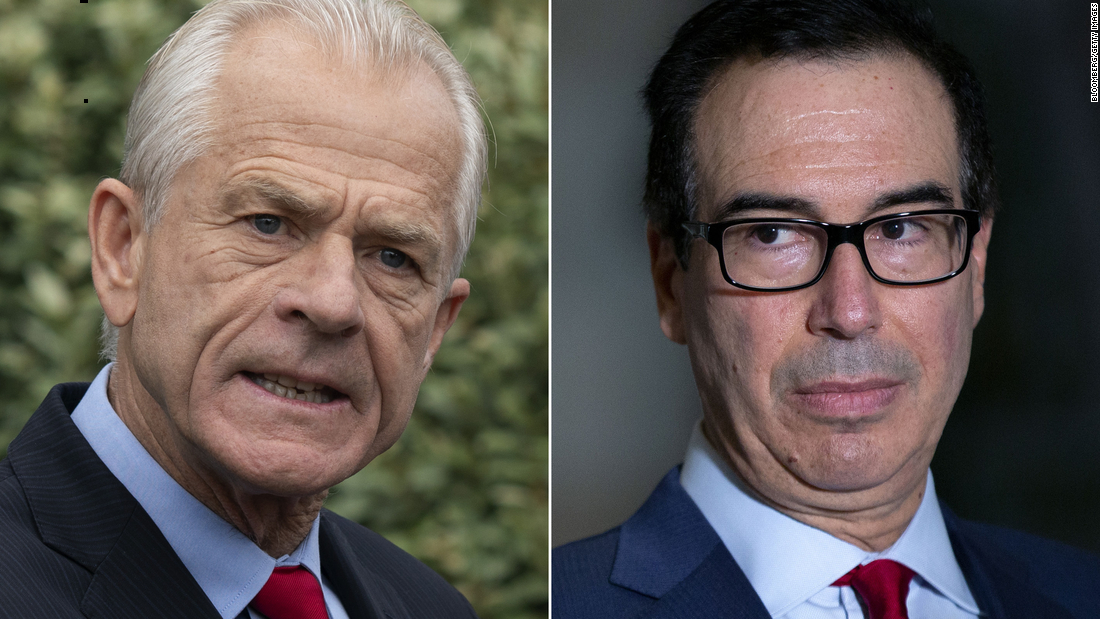 In front of President Donald Trump, Mnuchin argued that TikTok should be sold to a US company, while Navarro called for an outright ban of the social media app and accused the Treasury secretary of being soft on China, the Post reported, citing anonymous sources.

One person described the argument to the newspaper as a “‘knockdown, drag-out’ brawl” between the two Trump advisers.

The argument preceded Trump’s decision to sign an executive order Thursday banning TikTok from operating in the US in 45 days unless it’s sold by its Chinese-owned parent company.

Treasury Department spokesperson Monica Crowley told the Post that the department doesn’t comment on the specifics of meetings with the President.

Crowley, however, confirmed to the Post that Mnuchin did participate in a meeting with Trump “to update him on national security recommendations,” the paper reported.

“One of the great strengths of the Trump administration is the president’s reliance on strong, often opposing views, to reach decisions which are invariably in the best interests of the American people,” Navarro said in a statement provided to the Post. “Because this is true, it is critical for a strong America that ‘what happens in the Oval Office, should stay in the Oval Office’ so I have no comment on what is clearly a malicious leak riddled with hyperbole and misinformation.”

CNN has reached out to the Treasury Department and Navarro for comment.

Navarro and Mnuchin have had a long-standing rift over other trade actions. The two fought in 2018 on the sidelines of trade talks in Beijing and feuded over the steel and aluminum import tariffs Trump ultimately implemented.

Over the past two weeks, Trump has gone back and forth on the future of TikTok. The Trump administration has accused the app of being a tool for Chinese espionage and data collection, arguing that it gives China access to massive amounts of American user data.

Late last month, Trump threatened to ban TikTok all together amid reports that Microsoft is in talks to acquire the app.

Microsoft said Sunday that it was moving forward with talks to acquire the app following a conversation between CEO Satya Nadella and the President.

Several officials briefed on the talks told CNN that Mnuchin, economic adviser Larry Kudlow, Attorney General William Barr and White House counselor Kellyanne Conway tried to persuade the President to back a deal for Microsoft. Over that weekend, Republican Sen. Lindsey Graham, at Mnuchin’s behest, also talked Trump down from his overt banning of the app, CNN previously reported.
And on Monday, Trump held a new position on the matter. He set September 15 as the deadline for TikTok to find a US buyer, but made an unusual demand for the US treasury to get a substantial cut.
On Thursday, however, Trump issued an executive order that would ban TikTok from the US in less than two months unless it’s sold — raising the pressure on negotiations over a potential sale.
Navarro in an interview with CNN’s Jim Sciutto last week expressed concern about a potential Microsoft acquisition because of the company’s links to China, citing the availability of Microsoft services in the country including its Bing search engine and Skype video calling platform.

“The question is, is Microsoft going to be compromised?” Navarro said.

He suggested that Microsoft should divest its Chinese holdings.

Black Americans are fired up and flocking to the polls