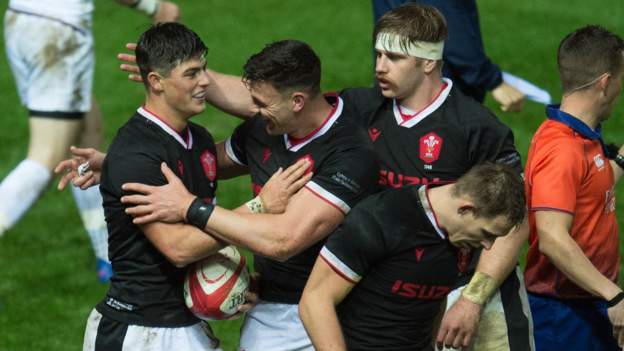 Wales ended their run of six defeats with an unconvincing Autumn Nations Cup win over Georgia in wet conditions at Parc y Scarlets.

Wales will have to improve with England visiting Llanelli next Saturday.

Wayne Pivac also has concerns over flanker Justin Tipuric who left the field with a head injury.

What the Wales head coach does in terms of selection next week remains to be seen with many experienced campaigners aiming to come back in.

Man-of-the-match Aaron Wainwright, second-row Jake Ball and centre Johnny Williams carried well, while Wales were dominant in the scrum in challenging conditions but the attacking tempo needs to quicken up.

Wales’ last win had come against Italy on 1 February which had been followed by a pair of defeats against France and Ireland and losses against England and Scotland.

Wales had won both matches against Georgia with a 13-6 win in 2017 followed by a World Cup pool 43-14 win in Japan two years later.

Pivac made 13 personnel changes with only Tipuric and Liam Williams surviving from the starting side that lost 32-9 to Ireland in Dublin. Tipuric led the side in the absence of Alun Wyn Jones.

James Botham, grandson of England cricket great Lord Botham, made his Wales debut having only been called up to Wales’ squad on Monday alongside Johnny McNicholl who was also started.

Cardiff-born Botham was among three newcomers selected in the starting side to face Georgia alongside Scarlets backs Johnny Williams and Kieran Hardy.

He represented England and scored a try in a non-cap game against the Barbarians in 2019, but qualifies for Wales through his father, who hails from Rhyl.

Bristol fly-half Callum Sheedy, who also played for England against Barbarians, and 19-year-old Gloucester wing Louis Rees-Zammit made their first Test starts after debuts as replacements in recent games against Ireland and France respectively.

Georgia made five changes from their defeat against England. Eight of the starting 15 are currently with French clubs, including Brive half-backs Lobzhanidze and Tedo Abzhandadze, and six of the forwards.

Georgia arrived in Wales with a reputation as strong scrummagers but was Wales that enjoyed early set-piece dominance.

The Georgians were penalised and Sheedy opened the scoring with his first international points. Wales dominance took a while to materialise into the opening try but the scrummaging superiority and Georgia indiscipline resulted in the hosts wearing their visitors down.

Centre Williams was impressive with some strong bursts while captain Tipuric maintained his high levels of international performances.

Georgia began to show glimpses of attacking invention towards the end of the first-half but Tedo Abzhandadze missed a penalty with the last before half-time with Wales leading 10-0 at the interval.

McNicholl was forced off the field early in the second-half and was replaced by Jonah Holmes, before Sheedy pulled a penalty attempt wide.

Wales’ scrum dominance continued in the second-half with Scarlets props Wyn Jones and Samson Lee enjoying themselves on home turf and Sheedy benefitted with his second penalty.

An excellent run counter-attacking run from Rees-Zammit saw him link up with Tipuric who suffered a head injury following a swinging arm from opposite number Beka Saginadze who was given a yellow card by referee Luke Pearce when a red card was discussed.

There was initial concern over Tipuric in how he fell to the ground. The British and Irish Lions was dazed by the challenge and left the field and will face a battle to be fit to face England next Saturday.

Replacement scrum-half Webb took over the captaincy, while 19-year-old full-back Ioan Lloyd came on the field for his first cap for Liam Williams who left the field following a mouth injury.

Botham almost marked his debut with a runaway try but was penalised after being tackled. Wales’ second try finally came after Johnny Williams and Rees-Zammit set up the supporting Webb to score the final points.

One More Breach Will Result In Pakistan Players Being Sent Back Home From New Zealand, Says PCB CEO | Cricket News