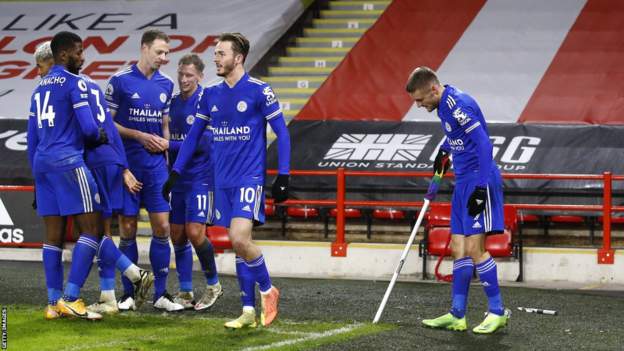 Foxes Pride said it was “saddened by LGBT-phobic comments” after Vardy celebrated a 90th-minute winner by kicking and breaking a corner flag, which carried Pride colours.

Vardy was given a yellow card for his over-enthusiastic celebration – not the first time he has celebrated a goal by hitting a corner flag.

On Tuesday, the fan group posted this image of a corner flag, carrying the Pride colours, which had been signed by Vardy.

The message on the flag reads: “Foxes Pride, keep up the good work.”

Foxes Pride said it welcomes the support from Vardy and the team.

Foxes Pride chair, Graeme Smith, told Sky Sports: “Since being established in 2015, Foxes Pride have always appreciated the support of all involved at Leicester City.

“This gesture from Vardy underlines the inclusive culture at our football club. We are proud to be able to partner with them, not just for Rainbow Laces but all year round.”