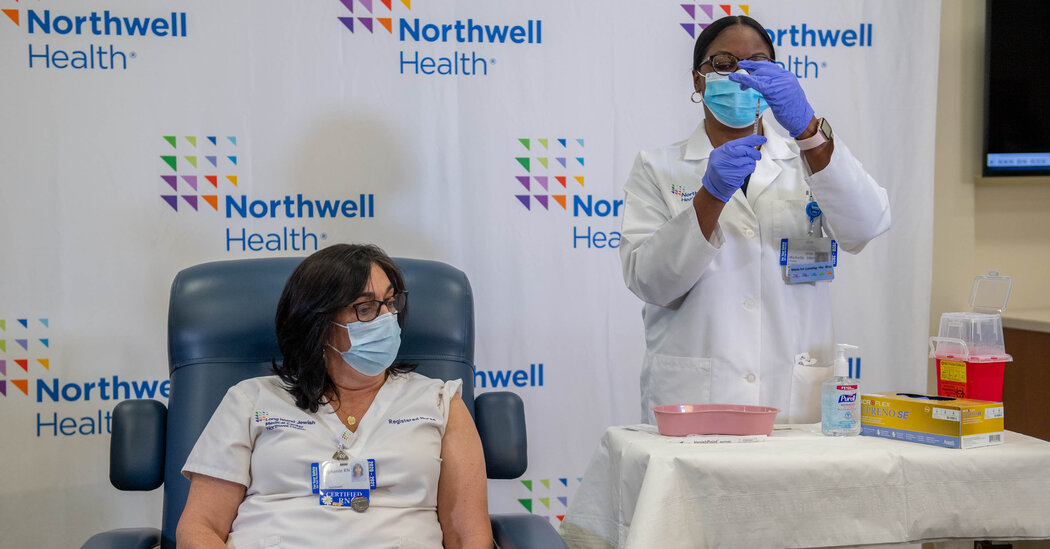 Weather: Sunny, with a high near 40, turning mostly cloudy tonight.

Monday was a day of hope for New Yorkers: The coronavirus vaccine arrived in the state.

Shortly after 9:20 a.m., a nurse in Queens became the first person in the country to receive the vaccine. In the coming weeks, hundreds of thousands of New Yorkers are expected to follow.

[Read more about the first vaccinations in New York.]

“I believe this is the weapon that will end the war,” Gov. Andrew M. Cuomo said on Monday. “We have planes, trains and automobiles moving this all over the state right now.”

Here’s what else you need to know:

The first shot was given to a critical care nurse.

Sandra Lindsay, 52, is the director of critical care nursing at Long Island Jewish Medical Center in Queens. In the spring, she led a team of hundreds of nurses treating extremely ill coronavirus patients.

Ms. Lindsay, who grew up in Jamaica, told my colleague Sharon Otterman that she wanted to lead by example.

[“I trust science,” says nurse who is first to get vaccine in U.S.]

“That was the goal today,” she said. “Not to be the first one to take the vaccine, but to inspire people, who look like me, who are skeptical in general about taking vaccines.”

The vaccine will be rolled out in phases.

State officials expect to receive enough doses from the drugmaker Pfizer in the coming days to begin inoculating 170,000 people. The vaccine is administered in two doses, a few weeks apart.

A batch of 346,000 doses from the drugmaker Moderna could arrive as soon as next week, pending F.D.A. approval.

The first phase of distribution in New York will prioritize 1.8 million health care workers, along with nursing home residents and workers.

The next phase will cover other essential workers, which could include police officers, teachers, grocery store workers and public transit employees.

It is uncertain when the vaccine will be widely available to all New Yorkers.

It is the largest vaccination effort in New York City history.

The distribution, Mayor Bill de Blasio said, marks a turning point for the city, which has recorded nearly 20,000 confirmed coronavirus-related deaths and over 320,000 virus cases.

He added that he hoped the vaccine would eventually bring down the average seven-day test positivity rate. As of Monday, that number was 5.5 percent — a rate that has been climbing since the start of fall.

“We’re going to be in the first wave of fighting back,” Mr. de Blasio said at a news conference. “But remember that vaccines are part of the answer.”

As virus cases climb in New York, people are finding different ways to celebrate Hanukkah. In some parts of the city, for instance, cars topped with menorahs have cruised streets in a parade. Here are a few more events happening this week to close out the holiday:

It was my first day going to work after moving into a house in Midwood.

As I walked toward the bus stop, there was only one other person on the street: an older woman who was bent over slightly and walking gingerly in my direction.

As we passed, she addressed me in a raspy voice.

“Careful, young man,” she said. “The leaves are falling out of the trees.”

“Thank you,” I said somewhat patronizingly, thinking to myself, “That is what leaves do, isn’t it?”

A few steps later, my feet went out from under me and I was flat on my back on a thin layer of innocent-looking, but moist, leaves.

What would you like to see more (or less) of? Email us: [email protected].

New Zealand’s borders may stay shut for most of the year, PM Ardern says

The stock market is at peak dumb: Etsy soars because Elon Musk tweets about it

Indian couple allegedly kill daughters, believed they could bring them back to life: report