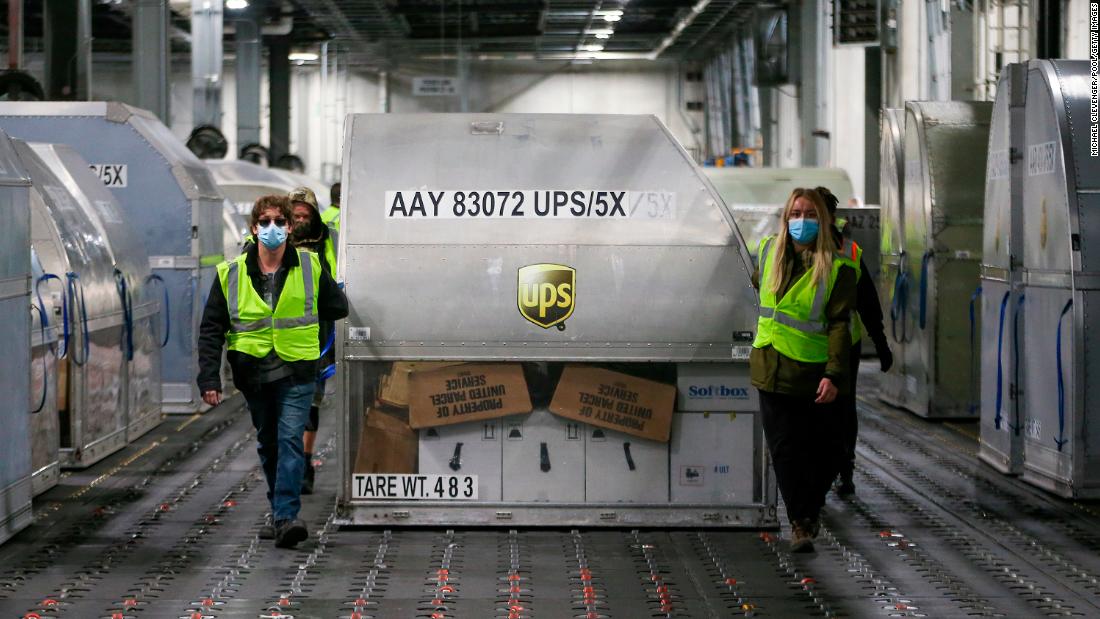 Thousands of vials of the vaccine were collected for distribution across the country Sunday after it passed its last regulatory hurdle.

“We expect 145 sites across all the states to receive vaccine on Monday, another 425 sites on Tuesday, and the final 66 sites on Wednesday, which will complete the initial delivery of the Pfizer orders for vaccine,” Gustave Perna, chief operating officer of Operation Warp Speed, said Saturday.

It’s up to states to allocate their share of vaccines, but the CDC has recommended that frontline health care workers and residents of long-term care facilities get the vaccine first. Officials warn it could be months before the vaccine becomes available to many Americans as the virus continues to surge, breaking grim state and national records.

More than 30,000 Americans died due to Covid-19 in the first 13 days of December, according to data from Johns Hopkins University. It put the country’s death toll since the beginning of the pandemic at nearly 300,000 as of Sunday night, with more than 16.2 million reported cases.
And hospitalizations have remained above 100,000 for 12 consecutive days, breaking records for eight days in a row Sunday, the Covid Tracking Project reported.

The president of UPS Healthcare, Wes Wheeler, told CNN on Sunday evening that all of the flights carrying the vaccine had taken off from the Louisville, Kentucky, airport and nearly all of the ground deliveries had departed.

The off-load will begin at 8 a.m. ET Monday, meaning the vaccines will be delivered shortly thereafter, around 8:10 or 8:15 a.m., according to Wheeler.

One of the biggest challenges the carrier faces is maintaining the temperature needed for the vaccine, he said.

“The minus-100-degree requirement with dry ice, making sure it moves, making sure the temperature is maintained, making sure the dry ice that follows the shipment after the vaccine arrives, that’s important also,” he said. “Making sure that we coordinate the kits that are going out ahead of the vaccine so the administration sites have everything they need to do the dosing as soon as tomorrow morning.”

Wheeler told CNN’s Ana Cabrera that the command center for UPS is watching every shipment and tracking all of the packages. He said they can see every time a package arrives at one of the UPS sites around the country.

The Ohio State University Wexner Medical Center expects the first doses of the Pfizer Covid-19 vaccine to be delivered between 9:15 and 9:30 a.m. Monday morning, hospital spokesperson, Alexis Shaw said in a statement to CNN.

Once the vaccine arrives, Shaw said, they plan to begin vaccinating about 20 to 30 of the hospital’s “prioritized, high risk frontline health care workers” within 1 to 1.5 hours.

Meantime a University of Michigan Hospital spokesperson told CNN the hospital expected to receive its first doses of the Covid-19 vaccine at 8:45 a.m.

“This is a major milestone for science, our country and our community. Thank you to all those who made this delivery possible, and are part of the incredible effort to distribute vaccines around the world,” LAX said.

The virus is still raging across the US with different states varying in their approach to tackling the pandemic, even as they prepare to receive the vaccine.

Sunday marked the third consecutive day California had over 30,000 daily new positive coronavirus cases, according to data released by the California Department of Public Health.

More than 90% of California residents are under orders to stay at home, except for essential needs like grocery shopping, banking, and doctor appointments. The state mandated residents to stay at home once ICU capacity for the region fell below 15%.

In Nevada Sunday, Gov. Steve Sisolak extended existing Covid-19 restrictions until January 15, saying the state continued to see the effects of the surge caused by the Thanksgiving holiday.

“We are at a critical point,” Sisolak said, “We will be monitoring and evaluating our current situation day to day and week by week will remain under the current restrictions for now, with the goal of getting through the next month.”

The state is expecting to receive the first shipment of the vaccine on Monday, Sisolak said. While he did not mention exactly when vaccinations would start, Sisolak said plans are in place to distribute the first allocation to frontline health care workers and staff and residents in the nursing facilities for “immediate vaccination.”

In Washington, Gov. Jay Inslee also said Sunday that his state would be receiving the first vaccine shipments on Monday, with vaccinations expected to begin Tuesday.

An initial 62,000 doses will be distributed to 40 facilities and 29 counties, Michele Roberts, Acting Assistant Secretary of the Washington Department of Health said.

“Today’s news means we will see an end to this pandemic,” Inslee said. But he warned that residents should continue heading safety precautions despite the start of vaccinations. “I want to be clear, this does not change the importance of our safety precautions. Masking, physical distancing and limiting interactions is just as important tomorrow as it was yesterday.”

The director of the National Institutes of Health warned Sunday that those who receive the vaccine should continue to wear their masks.

“You still need to think of yourself as potentially contagious even though you are protected from getting sick at a very high percentage of certainty,” Dr. Francis Collins told NBC’s Chuck Todd on “Meet the Press.”

It’s not yet known whether the Pfizer and Moderna vaccines prevent people becoming asymptomatic carriers of the virus.

Collins told Todd that it was “an urgent question to discover” and figuring it out will take a couple of months.

“Masks are still going to be part of our life. We need to recognize that and not step away or start to drop our guard,” said Collins.

But he pleaded with people to get the vaccination, saying that its safety and efficacy details were publicly available.

“I think all reasonable people, if they had the chance to sort of put the noise aside and disregard all those terrible conspiracy theories, would look at this and say, ‘I want this for my family, I want it for myself,'” he said of the vaccine. “People are dying right now. How could you possibly say let’s wait and see if that might mean some terrible tragedy is going to befall,” he said.