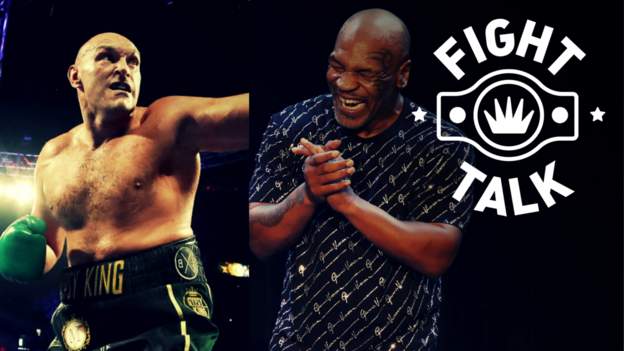 Tyson Fury could perhaps one day fight the man he was named after, Kubrat Pulev cares little for Anthony Joshua’s status and Callum Smith has faith he can humble a boxing superstar.

Some cannot wait to see what Tyson – now 54 – has left, while others seem to think boxing could do without such obscure distractions.

Tyson himself is stressing how the fight will raise money for good causes and has not ruled out light-hearted contests with modern-day heavyweights, including Tyson Fury – who was named after him.

“There’s so many people out there that we can do so much for,” Tyson told BT Sport. “In fact, fight exhibitions with me, and most of our charity would go to people who desperately need it.”

Fury is no longer fighting on 5 December as had been planned, but he’s hard at work and posted a video of his 56-year-old father on a seven-mile weekend run alongside him over the weekend.

“To all the over-50s who think they are finished, look at this man, two miles to go and full of energy,” shouted Fury’s father John.

One fight the boxing world is keen to see will happen on 19 December, after Britain’s Callum Smith got the call to say he was fighting Saul ‘Canelo’ Alvarez.

Fighting Alvarez – the sport’s biggest earner in recent times – tends to guarantee a healthy pay day but Smith seems confident he will come out on top in Texas and defend his WBA world super-middleweight title.

“Canelo’s best days are at middleweight. At 168 pounds I beat anybody. I’m the best in the world at this weight,” Smith told the Daily Mail.

Smith’s fellow Liverpudlian Tony Bellew sees hope too, telling Sky Sports: “Make no mistake, Smith is the test of a lifetime for Canelo. If anyone has the keys to unlock the door, it is Callum.”

Video clips of Canelo readying himself for fight night may, however, act as a reminder of what Smith is up against.

If Alvarez v Smith is the pre-Christmas gift we all need, Anthony Joshua’s defence of his three world heavyweight titles against Bulgaria’s Kubrat Pulev on 12 December is a sublime stocking filler.

But there has been plenty of grumbling over the £24.95 pay-per-view price.

Promoter Eddie Hearn says the absence of gate receipts on fight night has influenced the pricing and stressed the figure is the same as when Joshua faced Andy Ruiz Jr in Saudi Arabia in December, six months on from his initial defeat to the Mexican.

Pulev, meanwhile, is not being distracted by the pay-per-view talk, and appears focused solely on emulating Ruiz’s shock win over Joshua in June 2019.

“I can tell the fans that I will expose AJ again and prove they have been idolising the wrong guy,” Pulev told Betway. “I will expose him to the world for a second time.

“Yes, he has skills, but he hasn’t shown the mental strength. This is something from within, in the blood of a man, and he does not have it.”

Brits on a collision course…

Britain’s Conor Benn produced the best showing of his young career over the weekend to beat Germany’s Sebastian Formella.

During fight week Benn cried on camera because he missed his family in Australia and said he needed to be at home as his younger sister had reached an age where she was starting to talk to boys.

“I ain’t having none of that,” Benn quipped, before calling out fellow Briton Josh Kelly, who fights Russia’s David Avanesyan in the new year.

“He made it very clear who he wants next – Josh Kelly,” said promoter Eddie Hearn. “It won’t be next but we can certainly build towards that in 2021 and I see no reason why that mega fight can’t happen.”

A fight between two exciting British talents would be one to look forward to, but while many enjoyed Benn’s candid words, the likes of Northern Ireland’s Michael Conlan believe the well-schooled Kelly would pack too much experience.

And speaking of young Brits on a collision course, Daniel Dubois and Joe Joyce are days away from a bout that has already been postponed three times.

The heavyweights know a win elevates them into the world-title conversation and Dubois is keeping things icy and simple in the build up. 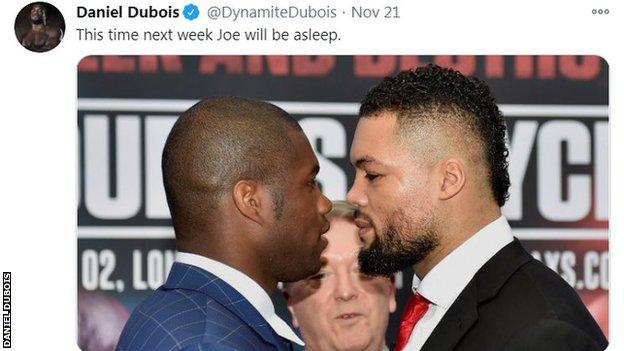