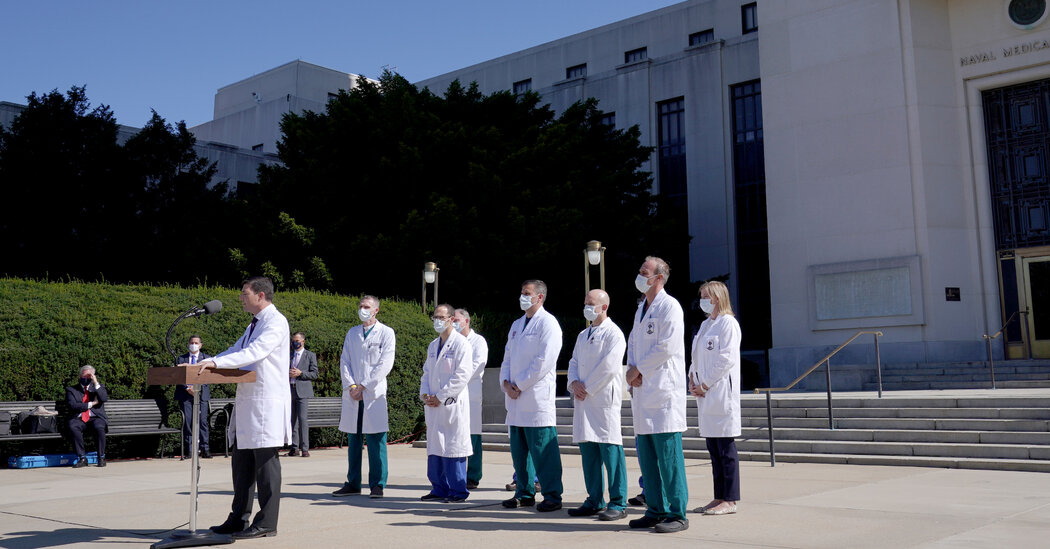 At Walter Reed, doctors put Mr. Trump on remdesivir, an antiviral drug that has hastened the recovery of some coronavirus patients, and gave him a second dose on Saturday. In another statement, issued after 9 p.m., Dr. Conley said Mr. Trump “remains fever-free and off supplemental oxygen” with a saturation level of 96 percent to 98 percent. “While not yet out of the woods, the team remains cautiously optimistic,” he said.

The outbreak infected a third Republican senator on Saturday as Ron Johnson of Wisconsin reported testing positive as did former Gov. Chris Christie of New Jersey, who helped prepare Mr. Trump for his campaign debate on Tuesday. In the course of barely 24 hours, the president, his wife, his campaign manager, his party chairwoman, his senior adviser, his former counselor, his debate coach and three Republican senators all tested positive for the virus, along with at least three White House reporters.

The White House medical unit was investigating Mr. Trump’s announcement of his nomination of Judge Amy Coney Barrett to the Supreme Court last weekend as a likely source of the virus’s spread. More than a half-dozen people who attended the event on Sept. 26 or were with the president on Air Force One flying to a campaign rally in Pennsylvania later in the evening have now tested positive.

Two of the three senators who have now tested positive for the virus, Mike Lee of Utah and Thom Tillis of North Carolina, were at the Barrett announcement and serve on the Senate Judiciary Committee that will consider her nomination, further complicating a confirmation drive that was already testing speed limits and a razor-thin majority to get done before the election, as Mr. Trump has insisted.

Mr. Johnson, the third senator now infected, was not at the event because he was quarantining from a previous exposure to someone with the virus. He emerged from 14 days of quarantine after testing negative and returned to Washington on Tuesday, his office said, but attended lunch with other Senate Republicans that put him in the same room with Mr. Lee and Mr. Tillis. He was tested again on Friday and it came back positive.

If all three Republicans were unable to vote, Senator Mitch McConnell, the Republican majority leader from Kentucky, would not have enough support to force through confirmation of Judge Barrett because two moderate Republican senators, Susan Collins of Maine and Lisa Murkowski of Alaska, have already indicated that they oppose installing a new justice before the election.

Even as Mr. McConnell said on Saturday that the full chamber would not meet this coming week as planned, Senator Lindsey Graham, Republican of South Carolina and chairman of the Judiciary Committee, issued a statement saying the panel would proceed with plans to meet on Oct. 12 to begin considering Judge Barrett’s nomination.