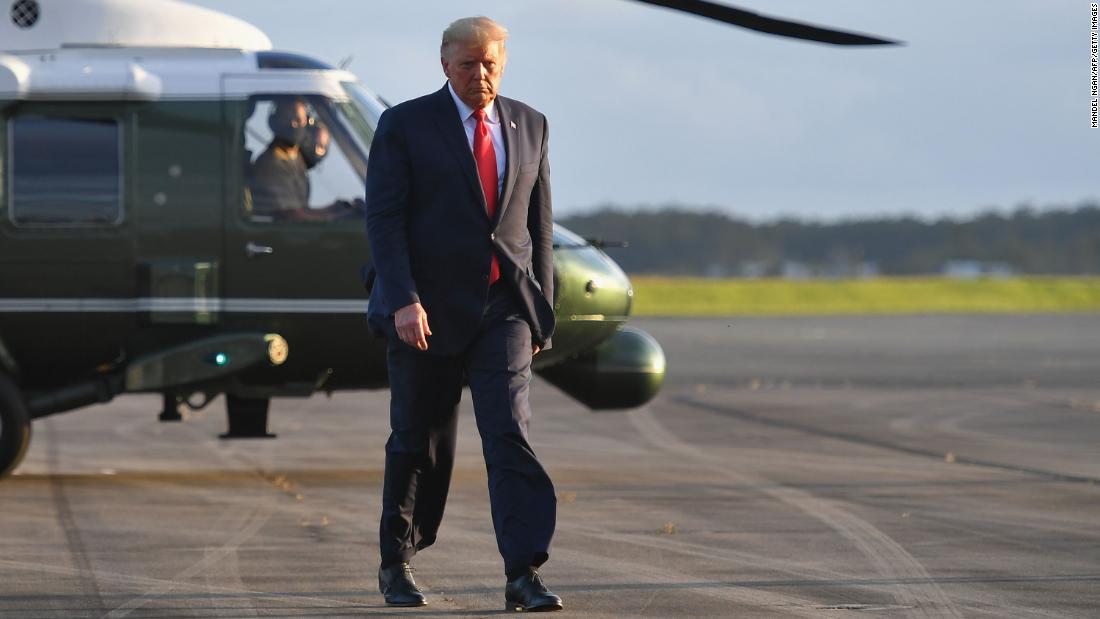 With the election less than two weeks away and more than 50 million ballots already cast, the fresh dispute over energy gave Trump a chance to shift the campaign away from his mishandling of a pandemic that’s killed nearly 224,000 Americans and argue that Biden’s remarks could cost him five or six states on Election Day.
Disapproval of Trump’s handling of the pandemic has created a heavy drag on the President’s poll numbers as he continues to ignore the current surge in cases in at least 30 states this week. In Florida on Friday, he once again insisted that the nation is “rounding the corner” and that life will soon return to normal, statements that are completely contrary to the facts.

Trump’s attacks on Biden’s stance on energy and the climate crisis come at a time when the former vice president is heading to the all-important state of Pennsylvania, which Trump won in 2016, that could serve as the lynchpin to who wins the election in 2020.

Several down-ballot Democrats in states with close ties to the energy industry — including two of House Democrats’ most vulnerable incumbents, Reps. Xochitl Torres Small of New Mexico and Kendra Horn of Oklahoma — distanced themselves from Biden’s comments, using it as a chance to highlight an area of disagreement with the top of the ticket.

During his two rallies in Florida on Friday, Trump highlighted Biden’s assertion during Thursday night’s debate that he “would transition from the oil industry, yes” to help address the climate crisis by increasing reliance on renewable energy.

But Trump eliminated any nuance in Biden’s position when in Florida on Friday, telling a crowd of seniors at the sprawling retirement community known as The Villages that Biden “wants to abolish the oil industry.”

The President claimed that was the big “whoa” of the debate in Nashville and once again cited states he said would be affected: “Texas are you watching? Pennsylvania, Oklahoma, Ohio are you watching?” Trump said.

“I think he should have lost five or six states with that one,” Trump said of Biden’s comments during an evening rally in Pensacola, where he told the crowd they should be concerned about a potential rise in their gas prices under a Biden presidency.

Stretching Biden’s comments to the realm of the ridiculous, Trump also claimed in The Villages that Biden’s transition to greater reliance on renewable energy would mean that America’s seniors “have no air conditioning during the summer, no heat during the winter and no electricity during peak hours.” He also falsely claimed that Biden’s plans would include getting “rid of airplanes.”

Trump has made environmental deregulation a hallmark of his presidency. Earlier in the day, the Department of Energy finalized a rule allowing for a new class of dishwashers, which critics say could circumvent key environmental regulations.

The President’s scare tactics on energy were part of his broader argument Friday that the election is a choice between a “Trump super recovery” and a Biden “depression.”

The Trump campaign quickly tied Biden’s debate comments about oil to the shifts in his position on fracking in a new ad that they are airing in Pennsylvania, which falsely claims the former vice president “will end fracking” and is willing to sacrifice blue collar jobs to do so.

Trump campaign officials announced Friday that they had raised $26 million as a result of the debate for the campaign and affiliated GOP committees, which they said was the reelection effort’s largest digital fundraising day. But Biden and aligned Democratic committees held a cash advantage of more than $107 million in the final weeks of the campaign in recent fundraising filings.

Though Trump told his audience in The Villages to “be careful, socially distance and all of the things,” including “wear a mask if you can’t socially distance,” many members of the crowd at his large outdoor rally were not wearing masks Friday. And on a day when Biden outlined more detailed plans for fighting the pandemic, Trump largely ignored the recent warnings from the nation’s top health experts that the nation is headed into a darkening phase of the pandemic.

While maintaining his upbeat tone, Trump falsely claimed Friday that “we’re going to quickly end this pandemic” and that “normal life will fully resume.” He also predicted that next year will be “the greatest economic year in the history of our country.”

By contrast, US Surgeon General Dr. Jerome Adams warned that this week will probably mark “our highest number of cases that we’ve ever had on a daily basis in the United States.” Speaking at Meridian Global Leadership Summit, he said hospitalizations, which generally lag behind cases, are starting to go up in 75% of the jurisdictions across the country. That trend has often been followed by a rise in deaths.

Build your own road to 270 electoral votes with CNN’s interactive map
Outlining his top four priorities for fighting the pandemic in Wilmington, Delaware, on Friday, Biden said mask-wearing should be mandatory; that he would increase the amount of personal protective equipment to workers; that he would expand access to testing nationwide and work toward ensuring the Covid-19 vaccine is free.

Calling Trump “reckless,” the former vice president urged Americans to choose a different path. “We don’t have to be held prisoner by this administration’s failures.” And he delivered a sharp critique of the President’s handling of the pandemic.

During an interview with CNN’s Erin Burnett on Friday, Dr. Anthony Fauci, the nation’s top infectious disease specialist, said that the country currently holds its own fate in its hands and that it is time to “double down on the kind of public health measures that we’ve been talking about for so long.”

Fauci stressed that getting control of the virus doesn’t mean forcing another economic shutdown, but instead doing basic things that can slow the spread of the virus, including wearing a mask, washing hands frequently, social distancing and avoiding crowds.

“They sound very simple, but we’re not uniformly doing that and that’s one of the reasons why we’re seeing these surges,” Fauci said on “Erin Burnett Out Front.”

A new modeling study published this week suggested that if 95% of Americans wore masks in public, more than 100,000 lives could be saved through February.
Fauci said he understands the argument that mask mandates could create new challenges because of the need to enforce them. But he said, “If people are not wearing masks, then maybe we should be mandating it.”

He said it was important for the public to avoid indoor group settings as much as possible in favor of outdoor settings: “We will lose control over it if we don’t do that,” Fauci said.

“That’s the reason why, as much as I can, essentially plead with the American public to please take these things seriously,” Fauci added. “We can turn it around.”

Do We Need Football in America This Badly?

Opinion: What Ronald Reagan could teach Georgia Republicans about winning