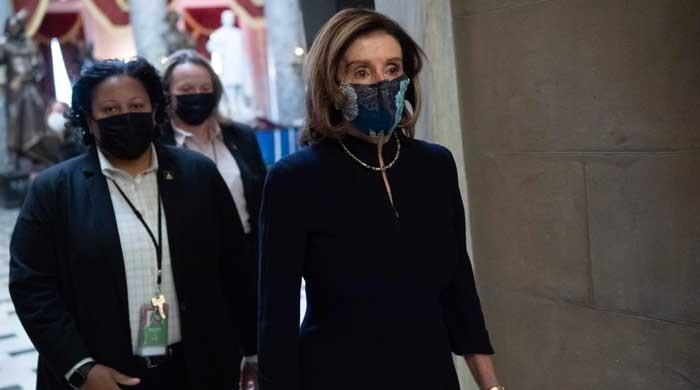 WASHINGTON: The House of Representatives was set to impeach “clear and present danger” President Donald Trump Wednesday, with several key Republicans backing the Democrat-led push to bring down the real estate tycoon in flames a week before he leaves office.

Reflecting nationwide tensions, lawmakers debated the charge against Trump of stoking insurrection against a backdrop of a Washington under a state of siege.

Armed National Guards deployed across the capital and central streets and public spaces were blocked off.

In the Capitol building itself, guards in full camouflage and carrying assault rifles assembled, some of them grabbing naps early Wednesday under the ornate statues and historical paintings.

The expected vote, coming seven days ahead of Democrat Joe Biden’s inauguration, would make Trump the first US president to have been impeached twice.

Trump´s epic downfall was triggered by his January 6 speech to a crowd on the National Mall, telling them that Biden had stolen the election and that they needed to march on Congress and show “strength.”

Amped up on weeks of conspiracy theories pushed by Trump, the mob stormed into the Capitol, fatally injured one police officer, wrecked furniture and forced terrified lawmakers to hide, interrupting a ceremony to put the legal stamp on Biden’s victory.

One protester was shot dead, and three other people died of “medical emergencies,” bringing the toll to five.

“He is a clear and present danger to the nation that we all love,” she said.

Earlier, Democratic lawmaker Ilhan Omar branded Trump a “tyrant,” saying that “for us to able to survive as a functioning democracy there has to be accountability.”

But Nancy Mace, a newly-elected Republican congresswoman said that while lawmakers “need to hold the president accountable” over the violence, the speed of the process “poses great questions about the constitutionality.”

Andy Biggs, a Republican accused of coordinating with rally organizers before the attack on Congress, warned Democrats that their “reckless” impeachment would only grow support for Trump among voters, adding: “You will have made him a martyr.”

Trump remains defiant, refusing to accept responsibility for his campaign to undermine Americans’ belief in the election system and his final, fiery speech on the Mall.

But his once seemingly unbreakable grip on Republicans is eroding as leaders run out of patience — and look to a post-Trump rebuilding of their party.

Vice President Mike Pence threw Trump a lifeline on Tuesday, saying he would not invoke the 25th Amendment that allows him and the Cabinet to strip a sitting president of his powers.

Impeachment on the single charge of “incitement of insurrection,” however, is all but assured to pass. Pelosi has scheduled a vote for around 3pm (2000 GMT).

Trump, who has been stripped of his social media megaphones by Twitter and Facebook, and finds himself increasingly ostracised in the business world, is struggling to impose his message — let alone any kind of resistance.

On a quick trip to Texas on Tuesday he visited the US-Mexico border wall, which he regards as one of his biggest achievements. But the brief, low-energy speech he made there did nothing to recapture his rapidly sliding momentum.

His insistence that his infamous speech to the crowd on January 6 had been “totally appropriate” and that he bore no blame for the attack on the Capitol infuriated allies and opponents alike.

While the House impeachment is all but assured, it had seemed highly unlikely that the Republican-controlled Senate would follow through with a trial.

Senate leader Mitch McConnell made clear that there was no time before the January 20 change in presidency because the Senate is in recess until January 19.

Other than scheduling problems, there has been no appetite among Republicans, who acquitted Trump in his first impeachment trial a year ago, to strip him of office just days before he is set to leave anyway.

However, according to The New York Times, McConnell signaled privately on Tuesday that he believes Trump did commit impeachable offenses and he welcomes the impeachment.

If confirmed, this would be a potentially fatal shift in the ground under Trump’s feet. McConnell could in theory call the Senate back for an emergency session or encourage his senators to join Democrats in convicting Trump even after Biden assumes office.

In the House, the number three Republican Liz Cheney said she would be voting to impeach, and called Trump’s actions “a betrayal” of his office.

This came after top House Republican Kevin McCarthy said members would not be required to toe the party line on the vote — a significant weakening of support for Trump.

Four other House Republicans have now also publicly stated they will vote for impeachment.

The increasingly toothless Trump’s social media woes deepened late Tuesday when video-sharing giant YouTube said it was suspending his official account for at least a week, out of concern his videos could incite violence.

He is also being cut out by the business world, threatening his future once he leaves the White House.

The latest blow to the Trump empire was when the mayor of his native New York City, Bill de Blasio, announced Wednesday a termination of contracts to run a golf course, two ice-skating rinks and a carousel in Central Park.