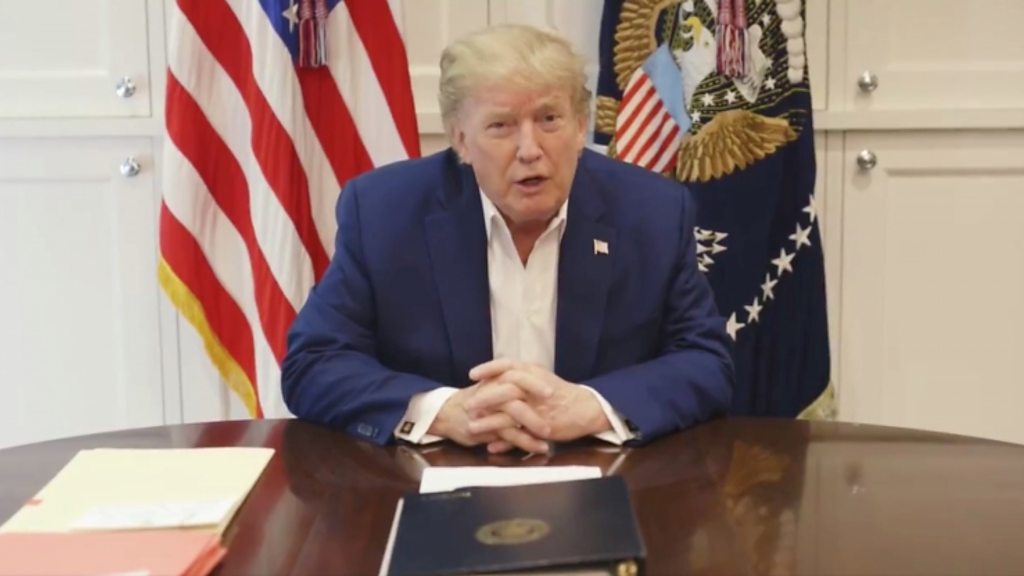 US President Donald Trump has continued to improve and could be discharged from a hospital where he is being treated with Covid-19 as early as Monday, his doctors say.

Dr Sean Conley said Mr Trump’s oxygen level dropped for a second time on Saturday and he was started on a steroid called dexamethasone.

He also said Mr Trump had been given supplementary oxygen.

On Saturday night, Mr Trump said the next few days would be the “real test”.

In the four-minute video on Twitter, Mr Trump, dressed in a suit jacket and shirt with no tie, thanked the doctors and nurses at the Walter Reed National Military Medical Center close to Washington DC.

“I came here, wasn’t feeling so well, I’m much better now,” he said, later adding: “Over the next period of a few days I guess that’s the real test. We’ll be seeing what happens over those next couple of days.”

Mr Trump’s message came hours after conflicting remarks about his health, with the White House chief of staff Mark Meadows saying his condition had been “very concerning”, contradicting an earlier upbeat assessment given by the president’s doctors.

But on Sunday, Dr Conley sought the clarify the statements, but said he did not try to “hide something”.

The president’s positive Covid-19 diagnosis, which he made public in a tweet early on Friday, has upended his election campaign. He faces Democratic challenger Joe Biden on 3 November.

A number of people around the president have tested positive, including First Lady Melania Trump. Many of them attended a crowded White House event last weekend on the nomination of Amy Coney Barrett as a Supreme Court judge. It is being scrutinised as a possible “super-spreader event”.