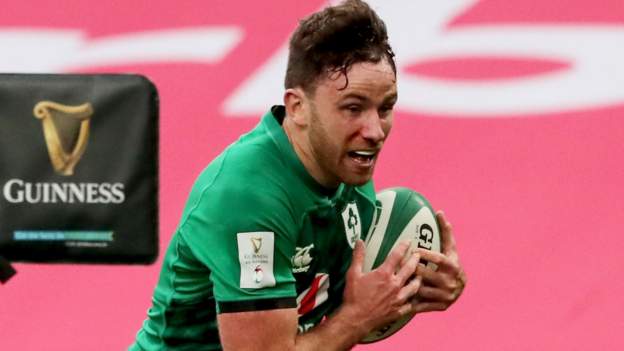 Debutants Hugo Keenan and Will Connors were among Ireland’s try scorers in a comfortable bonus-point win over Italy as the Six Nations returned seven months after it was suspended because of the coronavirus pandemic.

Wing Keenan crossed twice in the first half after CJ Stander darted over in reply to Paolo Garbisi’s early penalty.

Garbisi, the 20-year-old fly-half, grabbed a wonderful solo try in the final play to put a dent in Ireland’s score difference, which could come into play next week.

Having easily secured the maximum five points, Ireland will travel to Paris knowing a bonus-point win against France will ensure they become Six Nations champions.

Italy now must gear up for the daunting prospect of England at Twickenham, but are now guaranteed to finish bottom of the table for the fifth year in a row.

Although the win comes with the caveat that they were up against an Italy side now winless in their last 25 Six Nations games, Ireland’s victory and performance vindicated head coach Andy Farrell’s most notable team selection calls.

Leinster’s Keenan and Connors, alongside Caelan Doris on his second cap, picked up where they left off for their province with energetic confidence and expression on show throughout.

After the early setback of Conor Murray’s sin-binning for deliberately not releasing in the tackle on his own try-line after Jake Polledri had burst through the midfield, Ireland quickly settled to assert their dominance in the physical battle.

The first of nine first half turnovers set the platform for the hosts to put pressure on the Italy line allowing Stander to snipe over.

From there the momentum was firmly in Ireland’s favour. It took Connors 21 minutes to win his first international turnover and eight minutes later his outstanding counter-ruck provided the penalty from which Ireland went wide allowing Keenan to step inside and score.

For all he has impressed in the blue of Leinster, Keenan did not cross the tryline in his breakthrough season, a feat he actually achieved three times in his first Ireland outing.

The Dubliner thought he was in for his second after finishing a scintillating break from Jacob Stockdale, but play was pulled back for an earlier Irish infringement in the build-up.

Keenan did not have to wait much longer however, as Doris brilliantly stole the ball under his own posts setting off a rapid Irish counter-attack that saw Keenan ground Murray’s grubber kick to put Ireland 24-3 up at the break.