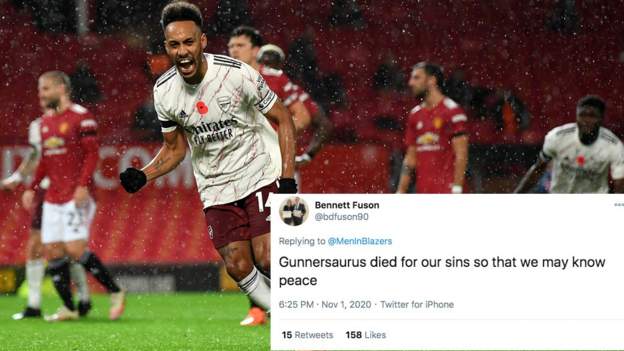 In a world where everything keeps changing, Arsenal beating a top-six opponent still has the ability to shock us.

Reassuringly, there are some things that don’t change, like Zlatan Ibrahimovic doing big overhead kicks.

That was Arsenal’s first Premier League away win over Manchester United since 2006.

Superstitious theories have been offered.

Meanwhile, for Manchester United, after thumping RB Leipzig 5-0 in the Champions League last week, it’s hard to find consistency and they now sit 15th in the Premier League table.

Manchester United, who were awarded 22 penalties across all competitions last campaign, fell victim to one on Sunday.

The goal had a familiar ring to it also – Paul Pogba has now given away three penalties in the Premier League under Ole Gunnar Solksjaer – more than any team-mate.

During that Leipzig fixture, Rio Ferdinand may have confused a few people with this observation.

A hard-fought win for Liverpool over West Ham on Saturday, plus Everton losing to Newcastle on Sunday, meant that there was a power-shift on Merseyside.

It’s been a turbulent and worrying start to the season for Liverpool, with injuries to key centre-backs, including Virgil Van Dijk, Joel Matip and Fabinho. Probably no-one would have expected their unknown back-up option, who was close to being sold in the summer, to be Liverpool’s man of the match against West Ham.

Little-known 23-year-old Nathaniel Phillips made more clearances and more interceptions than any other player, with Jurgen Klopp calling him a “monster” in the air.

Everton pushed holders Manchester City all the way in the Women’s FA Cup final. Appearing in their first final since 2014 and trying to win their first cup since 2010, Everton held off the favourites until goals in the 11th and 122nd minute won it for City.

For Manchester City, postponements imposed by the coronavirus mean that they could well win the FA Cup twice in the same season.

In a topsy-turvy world, where so much seems to be changing, it’s reassuring to know that, in Serie A, a 39-year-old Zlatan Ibrahimovic is still putting teams to the sword with overhead kicks.

That acrobatic effort – Ibrahimovic’s seventh goal in just four league appearances this season – won the game for AC Milan over Udinese and kept the Rossoneri at the top of the table.

Rayan Ait Nouri, 19, scored on his debut for Wolves to help beat Crystal Palace on Friday. Roy Hodgson, the Premier League’s oldest manager, was not happy with a red-card decision late in the game.

Those of a happier disposition may be pleased to know that Nice won this Ligue 1 fixture 3-0.

10. A bitter pill for Mtibwa

The losers of this one will have found it tough to swallow.

At a time when lots of people will be struggling, this brave and candid message from 23-year-old Chelsea defender Ben Chilwell was good to see.

And, finally, with the news that England will go back into lockdown from Thursday, you better get ready for some familiar favourites.