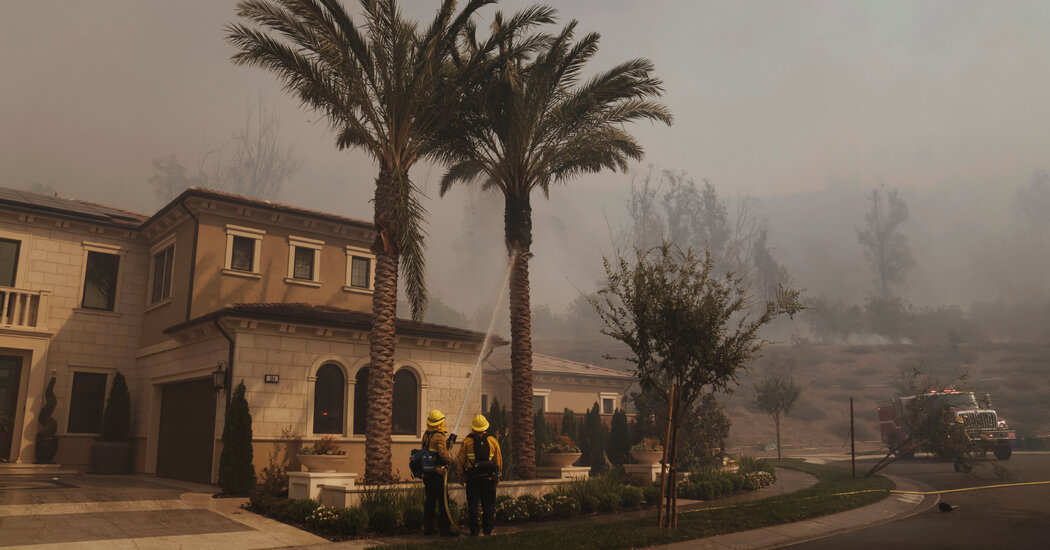 IRVINE, Calif. — Two firefighters were gravely injured and tens of thousands of Californians were forced to flee their homes on Monday as two new fires ripped through Orange County.

About 90,800 residents in Irvine were put under mandatory evacuation orders because of the Silverado Fire and the smaller Blue Ridge Fire, said Shane Sherwood, a division chief for the Orange County Fire Authority. High winds and low humidity fueled the fires’ rapid growth.

The two injured firefighters, ages 26 and 31, were intubated after receiving second- and third-degree burns across most of their bodies in the Silverado Fire, according to a statement from the Orange County Fire Authority.

“They’re gravely injured,” Chief Brian Fennessy said. “Their families are with them.”

Videos from the scene of the Silverado Fire showed gusts blowing as hard as 80 miles per hour. “The winds are horrible,” said Brian Alexander, 43, who evacuated his house on Monday morning with his wife and 5-year-old son.

While packing his vehicle before he evacuated, Mr. Alexander said, one gust was so strong that it slammed his car door as he tried to load up his belongings.

With the wind came particles of ash and dust, creating “by far the worst air quality that we’ve had,” Mr. Alexander said.

About 4,000 firefighters were fighting 22 wildfires across the state on Monday, according to Cal Fire, the state’s fire agency. As evening approached, the Silverado Fire had burned about 7,200 acres and the Blue Ridge Fire 3,000 acres. Later Monday night, the Orange County Fire Authority said that the Blue Ridge Fire had grown to 6,600 acres, and that one home was confirmed to have been damaged.

Video from the local news station KTLA showed cars parked along an overpass on the 133 Freeway as flames raged below and columns of smoke covered the roadway.

Charlane Stephenson, 67, a retired nurse, said she was at a doctor’s appointment on Monday morning when she received an evacuation alert on her cellphone. When she got home, a police officer outside her condominium door was ordering her and other residents to evacuate the building.

“When I got up this morning, I smelled smoke,” Ms. Stephenson said. “It was scary. I have lived in Irvine for four years since my husband died, and I have never been through anything like this.”

Investigators are working to determine the cause of the new fires. On Monday, Southern California Edison filed its second wildfire incident report this year to state regulators, stating that its equipment might have caused the Silverado Fire. Last month, the utility filed a report that said its equipment was part of an investigation into the cause of the Bobcat Fire, which burned more than 115,000 acres near Pasadena.

The Silverado Fire is only the latest in a season that has uprooted the lives of thousands across the American West. More than five million acres have burned across California, Colorado, Idaho, Montana, Oregon and Washington State.

In Colorado, a weekend blizzard knocked back two huge wildfires that killed an older couple, displaced thousands of people and destroyed dozens of homes in the northern mountains. But fire officials said the blazes, though weakened, were still smoldering under the snow.

“Things really laid down,” said Noel Livingston, the incident commander on the East Troublesome Fire, which has been burning through ranches and second homes in Grand County, on the western side of Rocky Mountain National Park. “But it’s not going to put the fire out.”

Most of Colorado is in a severe or exceptional drought, which means that one early-winter snow dump will not alleviate the dangerously dry conditions and dead brush that ignited like a mountainside of matchsticks last week, allowing the fires to explode.

Weather forecasters said there was little precipitation in the forecast for the next week, meaning the fires could continue to grow once the snow melts off.

Experts have linked the worsening fire season to climate change. Emissions of carbon dioxide and other heat-trapping gases from the burning of fossil fuels have led to warmer and drier conditions — making trees and brush more prone to burn.

In California, the new evacuations came as hundreds of thousands of people lost power on Sunday because of what Cal Fire called “extreme fire weather conditions” such as high winds and low humidity that could increase the risk for more wildfires.

The state’s biggest utility, Pacific Gas and Electric, began shutting off electricity to 361,000 customers in 36 counties, including Alameda and Contra Costa Counties, the company said in a statement. The utility expects to begin restoring power on Tuesday.

Pacific Gas and Electric, which emerged from bankruptcy in June after incurring an estimated $30 billion in wildfire liability, has increasingly used shut-offs to prevent its equipment from causing fires during extreme weather conditions.

This month, Pacific Gas and Electric reported to state regulators that its equipment might have been involved in the cause of the Zogg Fire in September, which killed four people, destroyed more than 200 homes and businesses and burned 56,338 acres. Last week, fire investigators announced that the utility’s equipment had caused the 2019 Kincade Fire, which destroyed 374 buildings and burned 77,758 acres.

In Irvine, outside the University Community Park shelter, the sky was visible through a haze of smoke, and winds were strong enough that it was difficult for some drivers to control the wheel.

Jianing Fu, 20, who lives with her mother, said she could see smoke when she woke up around 8 a.m. on Monday. “The sky was orange by then, but I wasn’t able to see any fire,” Ms. Fu said. “I told my mom, we need to evacuate immediately.”

Opinion | Biden Wants America to Lead the World. It Shouldn’t.