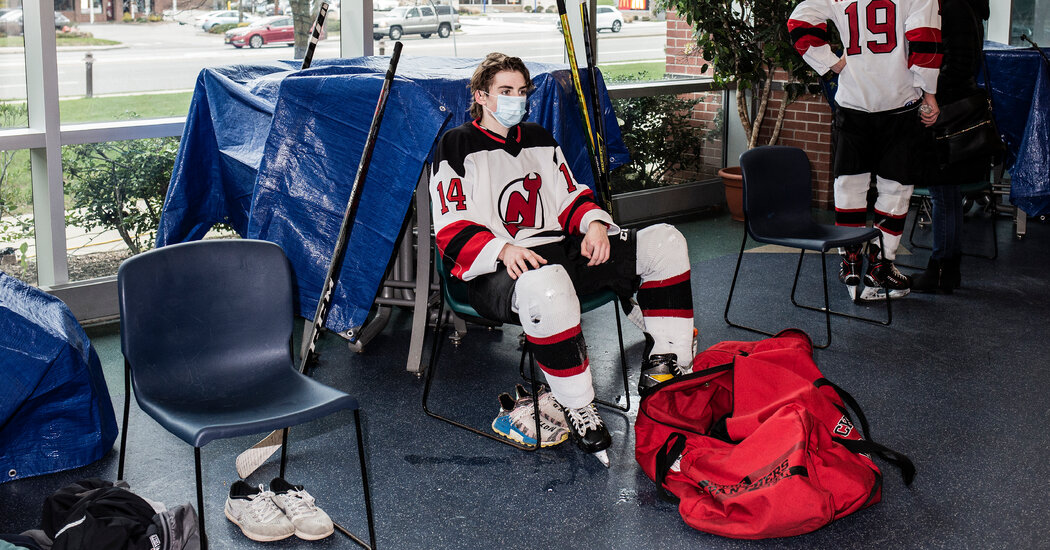 On a recent Sunday at a cavernous ice skating complex in suburban New Jersey, locker rooms sat empty while hockey players slipped into their uniforms in the parking lot.

The nearly 2,500 seats surrounding the main rink in West Orange, about 20 miles from Manhattan, were also empty, cordoned off with yellow caution tape. Instead, hockey parents gathered in the parking lot around elaborate audio visual setups, including a projection screen unfurled behind an S.U.V., to watch live streams of their children playing.

It was not the typical routine at a youth hockey competition, but it was the new reality the sport has had to adapt to during the pandemic. It was also one of the last times even this strange scene would unfold. New Jersey put hockey on hold on Dec. 5 as part of its effort to combat a spike in the coronavirus.

In New Jersey and in many suburban towns across the Northeast, youth hockey is an all- consuming ritual of the cold weather months. Players and their families devote nights and weekends and routinely drive hundreds of miles to compete in multiday tournaments.

“This is a way of life,” said Vincent Cucci III, a lawyer from Scotch Plains, N.J., whose two sons and daughter play on three different teams.

But like so many other things, it is a way of life that has been upended by the pandemic after a number of large coronavirus outbreaks were connected to hockey

In many states, youth hockey is now on hiatus.

New York has banned games and scrimmages since the beginning of the pandemic. New Jersey and Connecticut stopped competitive hockey and other youth sports until January. And interstate tournaments in the Northeast have been suspended.

In places where youth hockey has not been halted, the normal rhythms have been tossed out the window — no spectators allowed in arenas, locker rooms off limits to players and teams subject to mandatory quarantine if even one athlete tests positive for the virus.

For many state governments, shutting down hockey is a logical step to slow the spread of the virus.

In mid-November, Gov. Philip D. Murphy of New Jersey said that officials had been hearing of noncompliance with safety protocols, including by parents, and warned that “hockey is in our cross hairs.” In some instances, parents would congregate in restaurants or bars, potentially risky places to be, while their children played.

But to players and parents, canceling hockey means giving up a cherished pastime and the chance to connect with peers when many young people are isolated at home because of remote learning.

Mr. Cucci’s son, Vincent Cucci IV, who often plays at the West Orange arena as part of a New Jersey Devils under-18 youth hockey team, described getting out on the ice as “an escape from the world around you.”

New Jersey health officials grew concerned after they connected youth hockey to 22coronavirus outbreaks around the state, many more than other indoor sports, like basketball, gymnastics and swimming.

Mr. Cucci, a 17-year-old senior at Scotch Plains-Fanwood High School, said he understands the need for safety but believes that the precautions teams and rink operators have taken are sufficient.

Even before Mr. Murphy’s most recent ban, Mr. Cucci’s season had been delayed about two months and was interrupted when teams had to quarantine for two weeks when one of their players tested positive for the virus.

In New York, teams have had to settle for constant practicing.

Brett Jackson, the coach for an under-18 hockey team in Mamaroneck, said his players longed for games.

“It’s a little tougher to get the kids motivated, because it’s just practice,” Mr. Jackson said.

Some teams in New York had been traveling to neighboring states to play games before those states started banning the practice.

Ken Smith, the rink manager at Terry Conners Rink in Stamford, Conn., said many out-of-state teams had scheduled games there when they could not play in their home states.

“Every local youth hockey organization within 30 miles was kind of ice hunting in Connecticut,” Mr. Smith said, adding, “That has all stopped for the time being, obviously.”

New York State officials said teams that ignored the rules and still traveled out of state to play were helping spread the virus.

“The hockey-related clusters in New York have been connected to games played in other states — showing that even when we have strong rules in place, we can be hampered by individual actions,” said Jack Sterne, a spokesman for Gov. Andrew M. Cuomo.

Some parents and hockey players remain unconvinced that hockey is as much of a culprit as public health officials portray.

Kristen Schultz, who lives in Livingston, N.J., and manages her son Dillon’s under-16 team, said the operators of Essex County’s Richard J. Codey Arena, the official name of the West Orange facility, were so careful that “you can’t catch a cold, let alone Covid.”

But safety practices differ from rink to rink, and some medical experts see indoor rinks as intrinsically unsafe environments.

Dr. Perry N. Halkitis, dean of Rutgers University’s School of Public Health and an expert in infectious diseases, said the way hockey is played and its indoor setting made the sport a risky activity.

Still, identifying the source of transmissions is not foolproof, and some infections linked to hockey could have actually occurred in other settings, he said.

U.S.A. Hockey, the sport’s national governing body and a major organizer of youth leagues, has published best practices on how to play, including enforcing social distancing and avoiding contact on the ice, limiting or avoiding time in locker rooms and wearing masks.

“If you want to keep playing, we’ve all got to do this in and around the rink,” said Dave Fischer, a spokesman for U.S.A. Hockey.

Most players and parents at Codey Arena were less concerned about health risks than the prospect of giving up their season.

Marcos Trasbach, a 16-year-old from Hawthorne, N.J., was changing out of his gear in the rink’s lobby after his team lost a game. He sat on a chair set well apart from other players.

“We’re all separated in the rink,” Mr. Trasbach said. “Playing hockey, I don’t feel scared at all.”

“This is my primary sport, and I care a lot for it,” he added. “If this season ended, my hockey career would probably peter out,” he said, and he would lose “the brotherhood you get with your teammates.”

As Mr. Trasbach and his teammates left the rink, two teams of younger players had their temperatures scanned in the lobby before filing in.

Jay Butchko was sitting in his black Mercedes GLS 550 with his son Ryan, who had just finished playing. Mr. Butchko, who lives in Toms River, along the Jersey Shore, had watched the game from his car.

“The ultimate goal of all hockey parents is to be safe, and keep playing,” Mr. Butchko said. “Whatever it takes to do, we’ll do in order to keep our kids playing.”

Mr. Cucci’s last game before New Jersey’s shutdown took effect was against the Cranford Hockey Club. The teams had moved the game up before the ban started.

“I find it a little disappointing, for sure, but there’s been plenty of good that’s come out of hockey,” Mr. Cucci said, “and you have to take the bad with the good.”