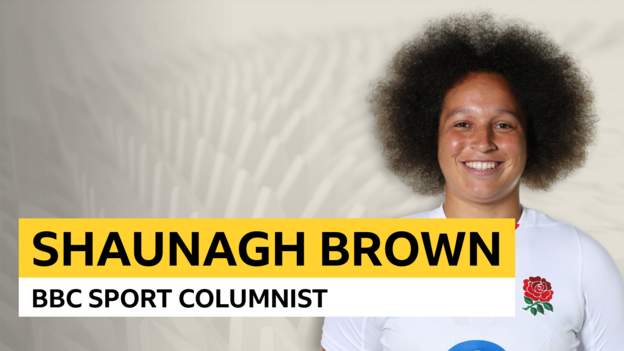 In her third BBC Sport column, England prop Shaunagh Brown talks about a game-changing match on BBC Two and the karaoke celebrations that followed.

Having a game on free-to-air TV outside of a World Cup feels like the real beginning for women’s rugby.

It is the shift change. It sounds corny but it is my dream come true. This is why I play rugby. I want it to be accessible to all.

I did not know rugby existed growing up so just having people know it exists and seeing there are different types of people on the pitch is so important to me.

Our team has people of different body types, heights, weights, skin colour, hair types. This is the exposure that it needs. It is the start of a huge journey.

Because we were on BBC Two, I had a lot more messages than normal. People contacted me on Instagram saying they had never watched a women’s game before but they would now be making an effort to watch more.

One of the best things is when black girls message me saying they saw me playing so they gave it a go too.

More established fans sometimes send me artwork of me playing. This is the most special one, it is up in my living room. 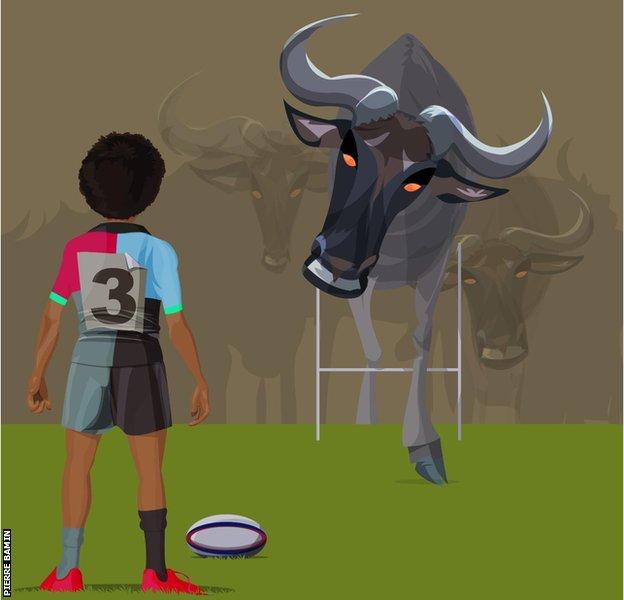 On Sunday, after watching me in the game against France, someone sent me this caricature. It is not my most flattering picture, but it is funny. 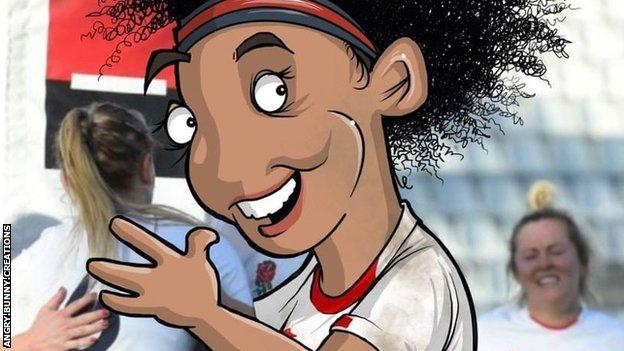 ‘We want to reach more fans before the 2021 World Cup’

Having the opportunity to introduce new fans to our games is perfect with the World Cup coming up in 2021. There will be more anticipation and build-up for it.

We reached the top of the world rankings with our win against France. We did not know before the match that that was a possibility.

But ultimately it does not matter if you are number one in the world, you have to win a World Cup to prove it.

It is also important to have matches like Saturday’s that are close at half-time – we were drawing 10-10 with France.

During the Six Nations, we sometimes win by big margins and as lovely as that is, it does not grow you as an athlete or a team.

Close games make for better viewing too. A neutral fan does not want to see a team getting beaten by 50 points.

‘We celebrated with karaoke’

To celebrate our win in France, prop Detysha Harper and full-back Ellie Kildunne led the whole team in karaoke.

Those two bring so much positive energy. They are young, Detysha is 22 and Ellie is 21, but our team environment allows them to be themselves.

They practised for hours before. I was the DJ finding the songs and they performed, coming up with dance routines.

They went to get the rest of the team, telling them they had a show. We are in a coronavirus bubble so the girls were happy because otherwise they were just sitting around chatting.

They did a mash up between Where is the Love? by The Black Eyed Peas and Pricetag by Jessie J and by the end of the night we were all singing together. Our best song was Hallelujah, the Alexandra Burke version.

We had the words up on the big screen and staff were popping their heads in wondering what was going on. Some of them even stayed and sang along – it was a great night.

Will lightning strike twice for Chorley and Wolves?