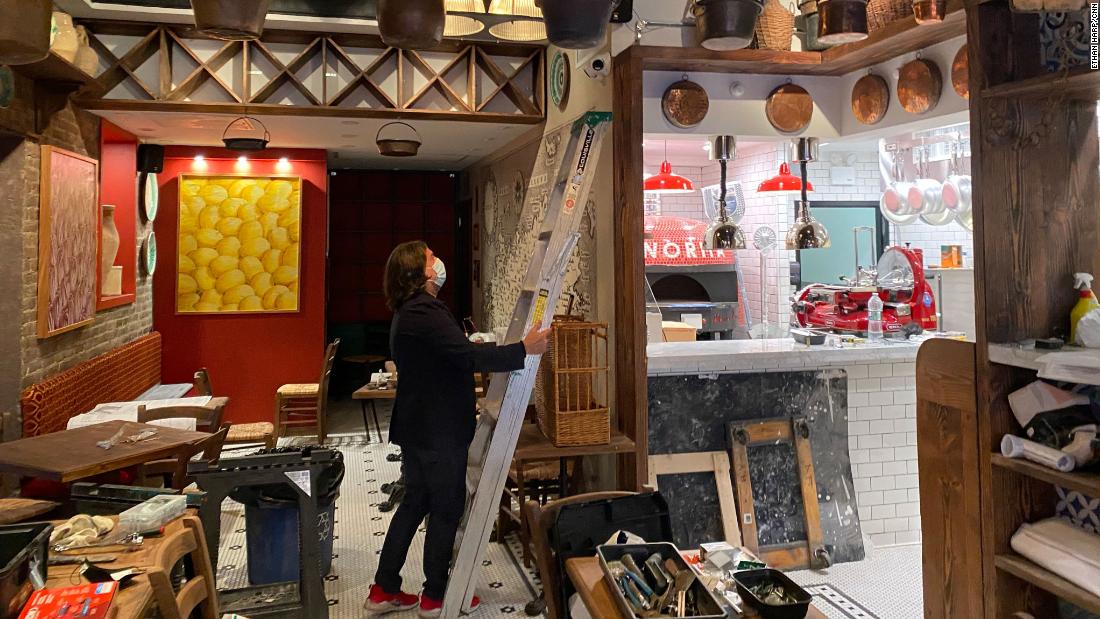 “I want to go forward — no surrender,” said Salvatore Fraterrigo, who placed that sign at his Sicilian restaurant Norma, a 70-seat trattoria set to open this month after the pandemic pushed back a planned spring launch.

“It’s extremely difficult: You put a lot of capital into opening a new restaurant, and you need to start generating revenue right away,” explained New York City Hospitality Alliance Executive Director Andrew Rigie. “So those people who were ready to open…have a lot of debt [and] uncertainty, and they’ve been sitting for the past six months.”

Some 100,000 restaurants nationwide, nearly one in six, have gone under as a result of the pandemic, according to the National Restaurant Association.

But others haven’t even had a chance to open — like Norma, which Fraterrigo and his wife and business partner Emanuela Pacifico were set to open in April after signing a 10-year lease last November.

But as New York became an early epicenter of coronavirus in America, delays mounted and they stopped construction. Then, on March 16 the city banned eateries from offering dine-in service, with Mayor Bill de Blasio warning that “the virus can spread rapidly through the close interactions New Yorkers have.”

But that doesn’t include Norma.

With autumn approaching and even chillier nights ahead, it would be a waste of time and money to build outdoor dining now, Fraterrigo concluded, with his ovens about to start for the first time.

He instead waited for the partial lifting of New York’s indoor dining ban at the end of September, which now allows eateries to seat at 25% capacity provided that customers have their temperature checked at the door, tables are six feet apart and diners keep masks on when they’re not at the table.

“I don’t think that 25% is going to help us,” Fraterrigo said, noting that Norma will be able to serve only about 17 diners at a time. “It’s gonna be very complicated, honestly. I was expecting at least 50%.”

So Fraterrigo is making hard choices, including cutting his own salary for now. But he does have the advantage of experience, and another location: After the Italian-born chef built his career at restaurants around the world, he opened the original Norma across town four years ago. He says the old place is holding on, thanks to its established presence and backyard garden for outdoor dining, and he will shift some of its veteran workers to the new location.

“Of course, if I knew” coronavirus was coming, Fraterrigo said, he wouldn’t have signed a lease for the next decade. But here he is.

‘There was no going back’

Yazmin Garcia was two months from giving birth to her son, Axel, when she opened her Mexican restaurant The Red Grill on Manhattan’s Upper East Side where her husband Mark Dominguez serves as manager.

“We had made a large investment … all of our savings. There was no going back,” Dominguez said.

The couple was preparing to open in late March, just as restaurant restrictions went into effect. Food inventory was in, and chefs were already beginning to cook in the kitchen.

“We just had to cancel all the plans,” Dominguez said.

Unlike established competitors, The Red Grill was unable to switch to a to-go-only format with a brand-new name and a large staff to pay. They looked into Paycheck Protection Program (PPP) loans, but were told they were ineligible since they didn’t have payrolls yet.

With bank accounts running low, The Red Grill took a leap when outdoor dining was given the green light and became one of the first in the neighborhood to offer it starting on July 1.

“We just opened the doors and wished for the best,” he added. “And then, God, the restaurant picked up within a couple of days.”

The outdoor dining was successful enough that The Red Grill was able to bring back five employees, and they’re now working with a 15-person crew.

But like Fraterrigo at Norma, Dominguez is also worried about the limits on indoor service. At The Red Grill, the bar takes up nearly a third of the restaurant’s indoor space, and the city guidelines bar customers from sitting there.

“We just have to take things one day at a time,” Dominguez said.

A few potential relief efforts are in the works. Federally, Rep. Earl Blumenauer proposed a $120 billion dollar relief bill for independent restaurants as part of the $2.2 trillion stimulus package that passed the House vote on October 1.

In New York, the City Council recently approved a potential up-to-10% Covid-19 surcharge that restaurants will be allowed to add to a check. The mayor’s office confirmed de Blasio will sign it, though they would not say when.

But with their hopes hanging on every customer, some owners worry about tacking more costs on their diners.

“I don’t feel like we should be leveraging our customers for financial aid while they are also suffering from the effects of this pandemic,” said Matt Diaz, owner of the Mexican café For All Things Good in Brooklyn, which opened in July. “We will now have to explain to our customers why we are charging them more, and even risk alienating them.”

But restaurant owners are no behemoth with their varying considerations and concerns. Diaz and Fraterrigo, for example, agree they would rather see government efforts like rent freezes — but Diaz isn’t sure he will open even 25% indoor capacity at For All Things Good, saying “it doesn’t seem worth the risk.”

The complexity highlights the challenge of weighing public health with financial health, and the small businesses caught up in that debate as the pandemic wears on.

At The Red Grill, manager Dominguez said he and his staff are trying to focus on the positive in a world of uncertainty.

“Everybody’s excited to come back to work,” he said. “Whatever we’re making, little or not … everybody’s happy that we’re making something.”

Nurse who lost her husband and mom to Covid-19: Our family didn’t have to be gutted – CNN Video