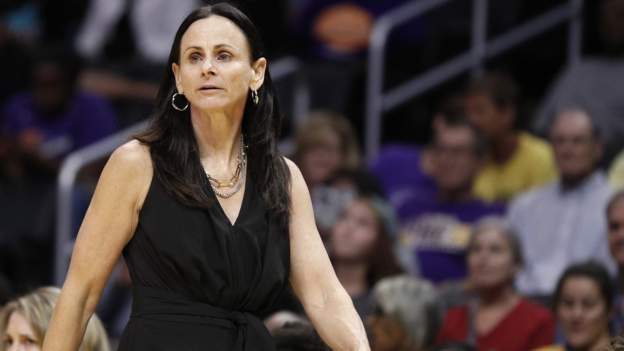 How do you juggle a demanding WNBA schedule with childcare commitments in the middle of a global pandemic – when you work for opposing teams?

Like the rest of the WNBA, Phoenix Mercury coach Sandy Brondello and husband Olaf Lange, assistant at Chicago Sky, are living in a specially created bubble in Florida, where the shortened 2020 season is being played out without fans.

But to get round their special set of circumstances, the couple decided to live separately.

“I’m in a hotel and he’s in a villa with his coaching staff,” Brondello told Sport Today on the BBC World Service.

“During the season, we really have no time for each other anyway, so it just makes it really convenient to be closer to our coaching staff, as well as having a bit of professional integrity being on two different teams.”

The couple’s two children, Jayda and Brody, split their time between each household and have embraced the unique living arrangements.

“For the kids, I think they’re having a ball. They’re loving it,” said Lange.

“They can go to the game, they go from mum to dad, to this team to that team. They’re having a great time and we make it work.”

As for where family loyalties will lie come tip-off, the children have yet to decide.

“The kids want us to make half and half shirts,” Mercury coach Brondello said.

“Usually for my game they have the Phoenix gear and then they wear Chicago when they watch Olaf, so maybe we’ll have to do a toss of a coin as to which one we get.”

The couple face off for the first time in the early hours of Friday morning.

Despite husband and wife being on opposing sides, there’s still a chance to talk tactics before a big game.

“Just the other day we shared play calls on teams we have played,” Lange said.

“We still talk about ideas here and there, obviously with the necessary professional integrity but yes, we share ideas.”

Listen to the full interview with Sandy Brondello and Olaf Lange on Sport Today on the BBC World Service after 20:00 BST on Thursday.