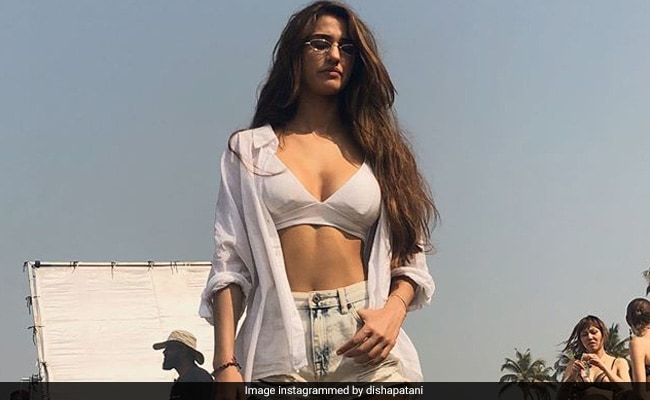 Disha Patani shared a stunning picture of herself on Instsgram on Sunday and it has the Internet’s heart. In the picture, Disha Patani can be seen dressed in a white tank top, a pair of denim shorts. She threw over an oversized white shirt. Disha perfectly accessorised her look with a pair of silver-rimmed spectacles. The picture appears to be from one of her shoots. The actress added a flower emoticon to her post. The comments section of Disha Patani’s post was flooded with heart and fire reacts from fans. Remarks like “gorgeous,” and “why so stunning” were frequently seen in the comments section of her post. “Simply beautiful,” added another Instagram user.

Disha Patani has frequently been sharing sun-kissed pictures of herself on her Instagram profile. Take a look at some of the posts here:

Disha Patani frequently features on the trends list for her rumoured relationship with actor Tiger Shroff. The duo shared screen space for the first time in music video Befikra. They later co-starred in the 2018 film Baaghi 2. Disha recently worked with Tiger in the Baaghi 3 song Do You Love Me. The actors are often seen exchanging comments on Instagram.

Disha Patani’s last project was Mohit Suri’s thriller Malang, co-starring Anil Kapoor, Aditya Roy Kapur and Kunal Kemmu. She will next be seen in Prabhu Deva’s Radhe: Your Most Wanted Bhai, which will be her second project with Salman Khan. The film will also star Jackie Shroff and Randeep Hooda.

Before entering Bollywood, Disha Patani was a model. She made her Bollywood debut in 2015 with sports biopic MS Dhoni: The Untold Story. She has also featured in films such as Baaghi 2 and Kung Fu Yoga among others.

Soumitra Chatterjee Put On Ventilator Support; “It Is A Steep Challenge,” Says Doctor