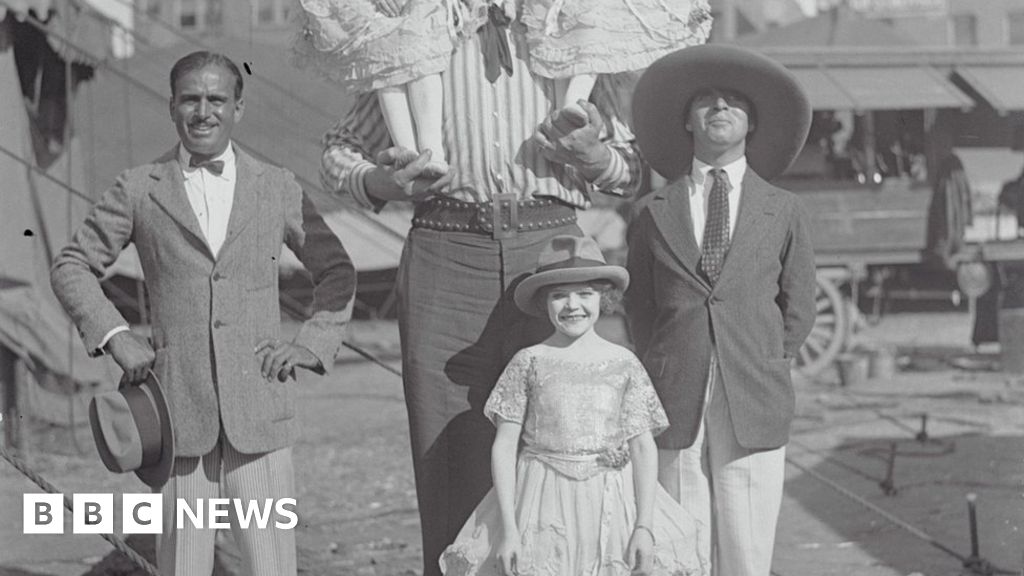 He was billed as the tallest man on earth by The Greatest Showman’s famous circus, was said to be a bodyguard to Queen Victoria and has links to the Absolutely Fabulous TV show theme tune.

‘Captain’ George Auger was reputedly 8ft 4in (2.5m) tall and apparently got his title from Queen Victoria who was said to have given him the nickname after he “protected” her.

His career in showbiz seemingly began by accident when he was offered a job by the famous Barnum and Bailey Circus – the focus of the hit Hugh Jackman movie blockbuster of 2017.

The story goes that Auger was approached by circus bosses after he turned up to watch one of their touring shows – and was actually taller than their ‘tallest man act’.

After moving to the United States and becoming a mainstay in Barnum and Bailey’s “freak show style” circus, Auger was on the verge of breaking into the movies when tragedy struck.

The day before he was due to move to California for a $350-a-week role alongside Hollywood great Harold Lloyd in a film, he died suddenly aged 40.

Such was his popularity in the US, hundreds watched as his body was lowered on a crane in a specially made coffin from the second-floor window of his New York apartment because he couldn’t fit down the stairs – as his faithful bulldog Ringling looked on whining.

And there followed a nationwide publicity campaign to find a replacement for his part in a film that went on to wow critics.

A story of an unknown Welsh hero

This is not a tall story, rather a story about a tall man – sometimes called the British Goliath, but mostly the ‘Cardiff giant’ – one of Wales’ unknown heroes.

“From the slums of Cardiff to the verge of Hollywood, via Queen Victoria and being a freak show star of the world’s most famous circus,” said great nephew Bob Osbourne.

“Then dying the day before you embark on your film career – it merits a film of its own.”

George Auger was born between Christmas and New Year to mum Elizabeth and former Army Corporal and policeman father Henry in Cardiff in 1881 – not named George, but William Henry Auger.

“His parents were normal size but George was a freak of nature and had gigantism,” added Bob, who has researched his family and great uncle George’s “surreal” story.

After moving to London as a toddler, Auger lied about his age to get into the Royal Marine Light Infantry aged just 12. He probably got away with it because he was already 5ft 8in (1.72m) tall. He lasted less than a year before deserting.

He lied about his age again a few years later to join Great Western Railways in Paddington – claiming he was 19 when just 15 – when he joined up as a policeman.

It was here that his ‘captain’ denomination came about – a label he would adopt to his advantage in a few years on the other side of the Atlantic.

He never held an official captain rank but the title is said to have come from Queen Victoria after he was assigned as her police escort while she travelled around London.

“He was picked up by Queen Victoria to be a private bodyguard,” said Bob. “His job was to stand there and look tall and menacing.”

Well, the ‘captain’ tag lasted longer than the job as he was dismissed as a police officer after just a year in 1899.

Auger was only 17 when he began work as a doorman in London’s West End and at the turn of the 20th Century, he had grown to 7ft 4in (2.23m) and was described as the second tallest man in the world.

A giant leap into showbiz

His career in entertainment tentatively began in a Christmas panto as, you’ve guessed it, a giant in Ealing Theatre’s 1900 edition of Puss in Boots.

Then came his unintentional big break – when he went to a show as a spectator and ended up becoming the headline act.

Articles from the day say Auger went to a Barnum and Bailey Circus performance while they were on tour in London. After noticing he was taller than their tallest man act, the show’s management apparently encouraged him to travel to America to join the company.

“He seemed to not just be in the right place at the right time but he capitalised on those opportunities,” said Bob, an artist whose grandmother Hilda was born 30 years after her very big brother.

“What are the chances of Barnum coming over, seeing someone tower over everyone else, getting him on stage next to their own giant, sacking their own giant and telling him come to New York and we’ll make you a star.

“It shows a lot of bravery for a boy from a peasant family – and one that had probably been pointed at in the streets and the butt of jokes – to actually take the plunge and go to New York.

“This was a major journey in those days and he’d be leaving his old life behind because communication was rare then.”

So, in March 1904 he and new wife Elizabeth board the SS La Bretagne at Le Havre in France bound for New York.

His arrival in America hit the headlines as The New York Times described his uncomfortable transatlantic trip, where he had to draw his knees up under his chin to sleep in his six-foot berth.

The publication confirms he was due to appear in the Barnum and Bailey Circus show that would open at New York City’s famous Madison Square Garden later that month.

By this time he was his full 8ft 4in – if you believe what you read from the time. To put that into context, he would have had to duck in most modern living rooms.

“He had dwarfs in his pocket and got up to things which are completely non-PC,” said Bob.

“He could be forgiven for wanting a quiet life because he had a strange gigantic look and people on the street would have pointed fingers at him but he transformed that into a business opportunity.

“He was quite entrepreneurial, he embraced his size and monetised it – the epitome of the American Dream I suppose.” said Bob.

“He became a celebrity in the US, he wasn’t just tall but had star quality that gave him that appeal. People used to pay for him to come around their house and have pictures with their children.

“He milked it and who can blame him? Looking so different and being a bit of a freak, I think he loved being loved.”

The money-making from his extreme size took a new twist by 1907 when Auger had swapped the freak show for his own show – although still playing a giant.

Auger made himself the headline act in Jack the Giant Killer and played ‘the tallest man on earth’ – and just to accentuate his massive frame, he cast the ‘smallest comedian in the world’.

“The fact he authored a play and took it on tour steered him away from just being gawped at in a circus,” said Cardiff historian Ted Richards, who has been involved in new research into Auger’s life story, which has uncovered new details about his Cardiff origins and family.

“He found a niche for himself and he achieved some form of happiness.”

The 26-year-old took his show to Europe in 1908 – docking in Liverpool aboard the RMS Lusitania.

The actor became an American citizen in 1917 and was back in the circus a year later with a new nickname – the ‘Cardiff Colossus’ .

‘Made the best of what nature gave him’

Auger was ready to swap the relentless touring of circus life for the glitz and glamour of the up-and-coming Hollywood scene in 1922 when tragedy struck.

He had been cast in a movie produced by Hal Roach, who crafted the Laurel and Hardy franchise, to star alongside Hollywood royalty Harold Lloyd as the giant Colosso in Why Worry?

But after a thanksgiving day meal at friends he was staying with, Auger died of severe indigestion.

His obituary described him as a good natured, likable 8ft 4in (2.5m) person who lounged through life trying to make the best of what nature had served him.

Auger’s body had to be lowered in a specially made coffin from the second floor window of the Manhattan apartment with an estimated 1,000 people looking on.

Auger’s funeral was attended by many showbiz friends and colleagues from the circus, including Ringling, his loyal and trusty bulldog.

“It a classic tale of someone that looks different, finds happiness but the story ends in sadness,” said Bob.

“A freak born into abject poverty and living in the slums, becomes bodyguard for the Queen, gets spotted by the biggest circus of all time, moves to New York, becomes a celebrity and gets a Hollywood break but dies of indigestion the day before going.

“The story doesn’t need any embellishment, it’s got it all. And he was only 40.”

So we’ll never know how big the Cardiff giant could have been.

“He could’ve gone on to be one of Wales’ greatest entertainment exports,” added Mr Richards, chairman of Roath Local History Society in Cardiff.

“We’ve had some big names that have broken America like Dame Shirley Bassey, Sir Tom Jones and Sir Anthony Hopkins – but he would have been the biggest, literally.”

But the Auger connection with the stage didn’t end there – as one of the family did make it to Hollywood as a showbiz star of his own.

Auger’s mother and father split when their first born son was about 12 – and dad Henry is believed to have had 19 children with three different partners.

One of Auger’s younger brothers had a son in 1939 – and Brian Auger went on to become an accomplished musician, jammed with Eric Clapton and Jimi Hendrix and formed a 1960s band with Rod Stewart.

And with Julie Driscoll, he sang the 1968 hit ‘Wheels on Fire’ which would become one of the most recognisable TV theme tunes of all time to BBC TV comedy classic ‘Absolutely Fabulous’.

Exeter to play Toulouse and Glasgow