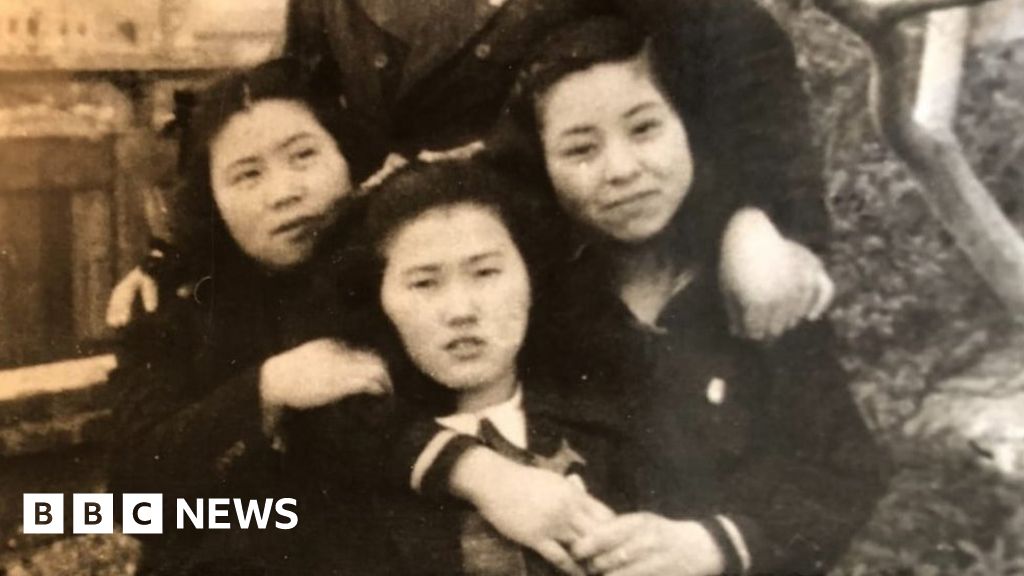 On the morning of 6 August 1945, Michiko overslept.

“I remember thinking, ‘I can make it to work on time if I get the later train, but I still might catch my usual train if I run to the station’,” she wrote, years later, in an account of the day.

“I ran to Yokogawa station, and I jumped on my usual train in the nick of time.”

Michiko’s sprint saved her life. It meant she was safely inside her workplace when her city – Hiroshima – was hit by the first nuclear bomb ever used in war.

“If I had missed my usual train, I would have died somewhere between Yokogawa station and Hiroshima station,” she wrote.

Michiko Yoshitsuka, 14, was a student at a girls’ school in the heart of Hiroshima. But when the city enlisted school children for the war effort, she’d started working at the Toyo Kogyo factory, 8km (5 miles) east of the city centre, making weapons for the Imperial Japanese Army.

If she did oversleep that day, it was through exhaustion rather than laziness.

She spent long hours at the factory. The war had led to widespread food shortages, so she was plagued by hunger, and the previous night – like many nights before it – US B-29 bombers had flown over Hiroshima, triggering air raid sirens.

The all-clear siren had sounded at around 7am.

But no-one outside the Manhattan Project – the US government research group that developed the atomic bombs – could have predicted the devastation that was to come.

The Enola Gay had flown from the US base on Tinian, in the Mariana Islands, to Hiroshima a few hours earlier. At 8.15am it dropped the bomb the Americans affectionately called Little Boy, obliterating the city.

An estimated 140,000 people died in Hiroshima, either immediately or in the months to come.

Michiko survived, thanks to Hijiyama, the high hill between her factory and the city centre, which shielded it from the force of the blast.

She watched the plumage of smoke rising above Hijiyama.

In the chaos, she headed for Nakayamatoge, the mountain path leading to her relatives’ house in Gion; on the path she crossed thousands of people leaving the devastated city.

“There were wounded people everywhere. I saw scores of people whose bodies lay burnt and festering, whose eyeballs had popped out from the wind pressure produced by the explosion, or whose internal organs protruded from their bodies and mouths,” she wrote.

“As I walked along, someone suddenly grabbed my ankle and begged, ‘Young lady, could you give me some water?’ I brushed away the hand… and said, ‘I’m sorry, I’m sorry!’ I was filled with fear and walked on to escape.”

At Gion, Michiko was relieved to find her mother alive. But there was no time to recover.

“For 10 days, my mother and I walked around Hiroshima, asking after my older brother, who was a soldier. We later discovered… he had died near the epicentre… My brother’s remains were never found.”

She may have survived, but Michiko fell ill soon after. Her symptoms were becoming familiar to the doctors still alive.

“I began to display the symptoms of radiation sickness… I was bleeding from my gums and my nose, I had severe diarrhoea, my hair was falling out, and purple spots were appearing all over my body,” she wrote later.

“I was put into isolation in a family friend’s shed, and I moved between life and death. Everyone around me thought I would die, but, miraculously, I survived.”

The bombings of Hiroshima and of Nagasaki days later did not end the war by themselves.

The US naval blockade, the imminent Russian invasion and the reworded Potsdam Declaration – the terms for Japan’s surrender – to enable continued Imperial rule were also decisive.

On 15 August, Emperor Hirohito’s surrender was broadcast to the nation. When he announced that Japan must “bear the unbearable”, many Hiroshima citizens were aghast: had they not already borne it?

In the days, weeks and months that followed, Hiroshima responded with resilience.

Within three days of the bombing, trains, trams and buses were running again. Within two months, schools reopened in half-destroyed buildings and open-air classrooms.

And with all but one of the city’s banks destroyed, the Bank of Japan – the sole survivor – invited its competitors into its branch to re-open for business. Hiroshima rose from its ashes.

Michiko was rebuilding her life too.

She gave birth to two healthy children, but soon had other problems. Her husband would often disappear to spend time with his mistress, taking Michiko’s earnings with him.

Exhausted by a tiredness she attributed to her radiation sickness, frustrated by her husband’s affair and craving freedom from her situation, Michiko often passed her children into the care of her relatives. When they returned, she would take her frustrations out on her daughter, Sanae.

“In 1964, my mother died of cancer. In my family, I was left alone. My mother had been receiving a war bereavement allowance. The Japanese government withdrew this following my mother’s death.”

When Michiko finally confronted her husband, he admitted to having an affair and left her for his mistress. With no financial support from her husband or the state, Michiko struggled. Yet she found work as a hostess in a traditional Japanese restaurant; each evening, she put on her kimono and served customers late into the night.

Every year, on August 6th, Hiroshima held its Peace Memorial Ceremony, attended by luminaries like Mother Theresa, Fidel Castro and Mikhail Gorbachev. But Michiko couldn’t reconcile the glib peace speeches with her images of that day and never attended the morning ceremony.

She would arrive in the evening to watch the floating lanterns, representing the souls of the deceased, released down the Motoyasu River.

When Sanae had children – a girl and a boy – her broken relationship with her daughter gradually healed. During Obon, the August holiday when families honour the spirits of their ancestors, she would visit Sanae’s family. Together they would watch a TV drama about the atomic bombing. Michiko found it unconvincing.

“Anna mono janai!” – “It wasn’t like that!” – her family remember her saying.

For most of her life, Michiko spoke little about her experiences in 1945. But as the 50th anniversary of the bombing approached, in 1995, Michiko’s doctor suggested she write her own account of events, to help her find some closure.

At first Michiko was reluctant, but she finally agreed; she feared that if she didn’t, her memories might be lost forever.

By that point, Hiroshima was a thriving modern city with wide boulevards, luxury department stores and few remains of its tragic past.

Michiko had been living in a council flat near the centre when she was relocated to Hesaka, an eastern suburb. Her new flat was near Nakayamatoge, the mountain path she had crossed on the day of the bombing.

The figure that had grabbed her ankle returned to haunt her.

“I will never be able to erase from my memory the sound of that voice,” she wrote.

When I first moved to Hiroshima, I knew little about its history. But I met a woman called Kaori, who told me the story of Michiko, her grandmother. Years later, as husband and wife, we translated Michiko’s account – moved by her sad story and determination to survive.

My wife recalls Michiko falling into depression in her later years.

As a strong-minded woman in a society that valued tatemae (flattery) over honne (honesty), she had always struggled to make friends. But now she felt truly isolated. Later, suffering from dementia, she moved into a home for the elderly. Michiko died in January 2012.

Her written account has now been placed in the Peace Memorial Hall in Hiroshima – one woman’s memories of a day that changed history and altered the course of her own life forever.

Her final entry hints at the human ability to overcome adversity and build a life again.

“Now, on the 50th anniversary of the atomic bomb, I sense afresh the preciousness of life.”

The ex-armed robber with a mission to make change