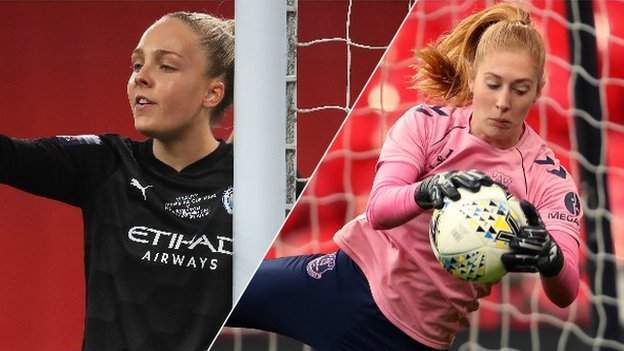 A host of stars from the 2019 World Cup were on show at the Women’s FA Cup final – yet it was two young English goalkeepers who thrived the most at Wembley.

Sandy MacIver and Ellie Roebuck showed a BBC One audience why the future is set to be bright for the England national team.

But MacIver, Everton’s 22-year-old goalkeeper, earned the player of the match award while her opposite number, 21-year-old England keeper Ellie Roebuck, also impressed with her agility at the other end.

Goalkeeping in women’s football has often been a source of ridicule and debate in the past, perhaps an easy target for criticism from onlookers who have few opportunities to watch women’s football on TV.

However, for decades, goalkeeping coaches in women’s football were almost unheard of. Not so in 2020.

Now the first generation of full-time professional women’s goalkeepers in England, who have received dedicated attention from a specialist coach, are showing the results of that focused investment, their hard work and their skill.

And on the evidence of Sunday’s final at Wembley, MacIver and Roebuck may soon give incoming England head coach Sarina Wiegman a welcome selection headache before the rescheduled European Championship on home soil in 2022.

The Everton number one produced a string of superb saves, in particular reacting with lightning speed to keep out a Chloe Kelly effort on the rebound after Caroline Weir had struck the post.

Everton academy product MacIver, who rejoined the club in January after three years with Clemson Tigers in the USA, then showed great reflexes to tip a Steph Houghton header on to the post in extra time.

That came after Roebuck had dived high to her right to keep out Spain international Damaris Egurrola’s header from a corner, with another brilliant save.

‘MacIver is England’s number one’ – Kirk

Speaking about MacIver’s display, Everton boss Willie Kirk said: “It was outstanding from start to finish.

“She took knocks and did everything she could to keep balls from going in the back of the net.

“Sometimes it wasn’t pretty. It was a punch or a slap. But she was outstanding and very much showed that, for me, she’s England’s number one.

“She made great saves and was on the end of the wrath from me when she played long when we needed to keep the ball.

“But she showed she was a top goalkeeper and will develop her game.”

Under Phil Neville’s management, Roebuck is the current England number one, with a new generation of goalkeepers emerging to take over from veterans Karen Bardsley and Carly Telford.

Asked whether MacIver or Roebuck should be the next permanent England keeper, former Lionesses keeper Rachel Brown-Finnis told BBC One: “Ellie is still ahead of Sandy in my opinion.

“Sandy made some key saves and it would not have gone into extra time but for her.”

On MacIver’s reaction save from Houghton’s header, Brown-Finnis continued: “That was unbelievable.

Manchester City boss Gareth Taylor said he was unsurprised by both keepers’ performances, adding: “The levels are just going up and they are moving up really quickly all over the pitch.

“I saw Sandy was awarded player of the match. I would argue some players in our team deserved that but she made some really good saves.

“We had to call on Ellie at times to make a couple of important actions for us.

“I’m not surprised in the levels because people are making an effort to really push in the women’s game – whether that is coaching or something else.”