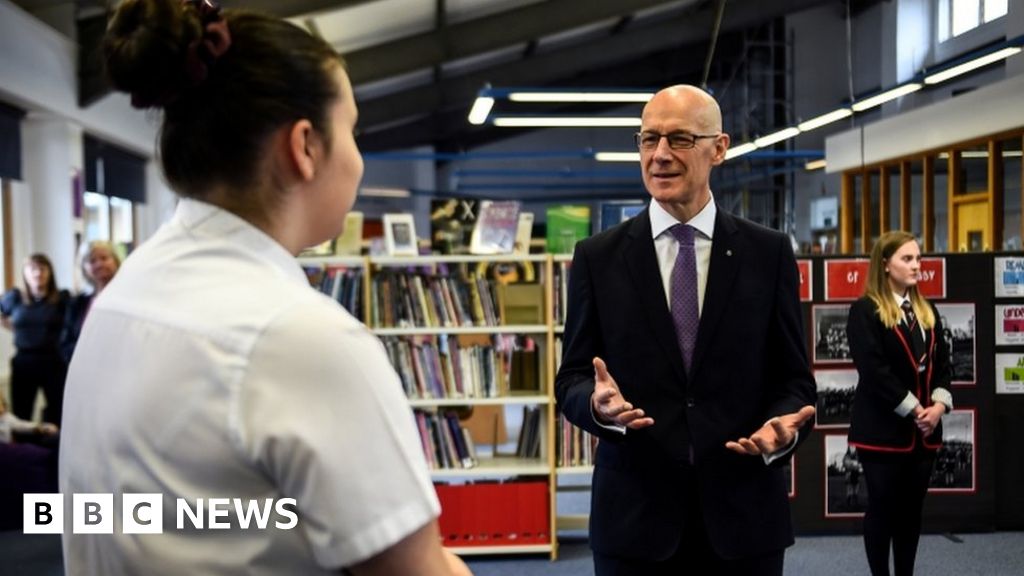 Scotland’s education secretary has rejected claims that bright pupils from deprived areas were unfairly penalised by the country’s exam system.

Thousands of pupils received worse results than they were expecting on Tuesday after the country’s exam body lowered about 125,000 estimated grades.

Some pupils believe they were penalised because their schools have historically not performed as well.

But John Swinney insisted that the data “does not bear this out”.

Speaking to the BBC’s Good Morning Scotland programme, Mr Swinney said it was always accepted that there would be “questions” about the grading system that was introduced when exams were cancelled due to the coronavirus pandemic.

But he said the pass rate for pupils in the most deprived areas was higher this year than it was last year, while the attainment gap between the wealthiest and poorest pupils had narrowed.

The education secretary added: “What I would accept is that there will be individual results which will cause disappointment.

“That is why the final stage of the process that was put in place by the Scottish Qualifications Authority is a free appeals process which enables young people, in consultation with their schools, to come forward with evidence which would challenge some of the judgements that have been made.

“I would encourage any young person who feels disappointed by their results, and that they should have had a better result, to use that service”.

‘My dreams are in tatters because of where I live’

Olivia Biggart, from Motherwell, achieved five As in her Higher prelims at the start of the year, and was predicted by her teachers to be awarded the same when her results arrived on Tuesday morning.

But despite having spent the summer studying for the University Clinical Aptitude Test (Ucat), she was awarded two As and three Bs.

Olivia, 16, and her family believe she was downgraded because of where she lives.

Her father, David Biggart, said: “It is a small school and in a poorer catchment area.

“Olivia got seven As in her Nat 5 exams. She was in fifth year doing maths, English, chemistry, physics and PE. The school predicted five As and that is what they submitted to the SQA.

“We had increased our expectations based on Olivia’s prelims, researching medical schools.

“Olivia has been studying all summer for the Ucat medical test to study medicine at university, but all her dreams are now in tatters as a result of the SQA and their treatment of poorer schools and high achieving pupils at those schools.

“I am absolutely livid at the SQA.”

School exams in Scotland were cancelled for the first time ever, with the grades of pupils worked out using estimates made by their teachers based on their performance over the school year.

However, these estimates were then moderated by the SQA exams body – which led to about 125,000 results being downgraded.

The SQA said its aim was to “ensure consistency across schools and colleges, and with results from previous years”.

As part of the process, the SQA looked at each school’s previous history of estimating results and attainment.

It developed a maximum and minimum pass rate for each course at every school based on the four-year average, but said it had built in flexibility to account for year on year changes.

First Minister Nicola Sturgeon said on Tuesday that the moderation process ensured the credibility of the system by preventing this year’s results being vastly better than previous years.

Ms Sturgeon added: “I would love to be in the position of standing here credibly saying that 85% of the 20% in the most deprived areas had passed Higher.

“But given that it was 65% last year, that would raise a real credibility issue.”

And Mr Swinney said he believed that teachers were often “optimistic and aspirational” about their pupils’ abilities, while an exam system “does something different”.

He said: “What the exam system has to assess is the attainment of young people against the standards which we have asked the SQA to maintain at all times.

“The crucial point about the maintenance of standards is that it would not serve young people in 2020 in any way satisfactorily if there was to be any doubt about the validity and the credibility of the qualifications that they have achieved.

“I am satisfied, based on the recommendation and the advice of the chief examiner, that the standards of Scotland’s exam system have been maintained and the young people of 2020 should be proud of the qualifications that they have achieved.”

Chris McEleny, a senior SNP councillor in Inverclyde, has claimed that the moderation system meant that “a kid not attaining as well in a more affluent school gets lifted, a bright kid in a school in a more deprived area gets shafted”.

And opposition parties have highlighted SQA figures which showed that Higher pass rate for pupils from the most deprived backgrounds was reduced by 15.2 percentage points, compared to only 6.9 percentage points for the wealthiest pupils.

Mr Swinney said that the focus should be on “closing the poverty-related attainment gap” and tackling social disadvantage.

He added: “That is what drives the difficulties and the differentials in examination performance.

“And that is what the government has devoted the last four years of its work to achieve, in closing the poverty related gap through the Scottish attainment challenge and the many measures we have taken in that respect.”

How were the results decided?

As in the rest of the UK, the grades of pupils who were unable to sit exams have been worked out using estimates made by their teachers based on their performance over the school year.

Teachers were asked to place students within bands for each subject, and rank their pupils in order.

These assessments were then checked by the SQA, which said grades had been moderated “where appropriate” to “maintain national standards”.

The SQA said it had sought to “uphold the integrity and credibility” of the system in its moderation, but that its efforts had been focused on “ensuring fairness for all learners”.

The exams body also said it would look at each school’s previous history of estimating results and attainment, but denied that a school’s previous record could put pupils at either an advantage or a disadvantage.

Read more about how the grades were calculated

What help is available?

The #NoWrongPath campaign is encouraging people to share their own stories on social media to highlight the different paths available to young people who may be feeling disheartened by their results.

Support and advice is also available on the SQA website and on BBC Bitesize. Pupils can also call Childline on 0800 1111 or get advice about exam results on its website.