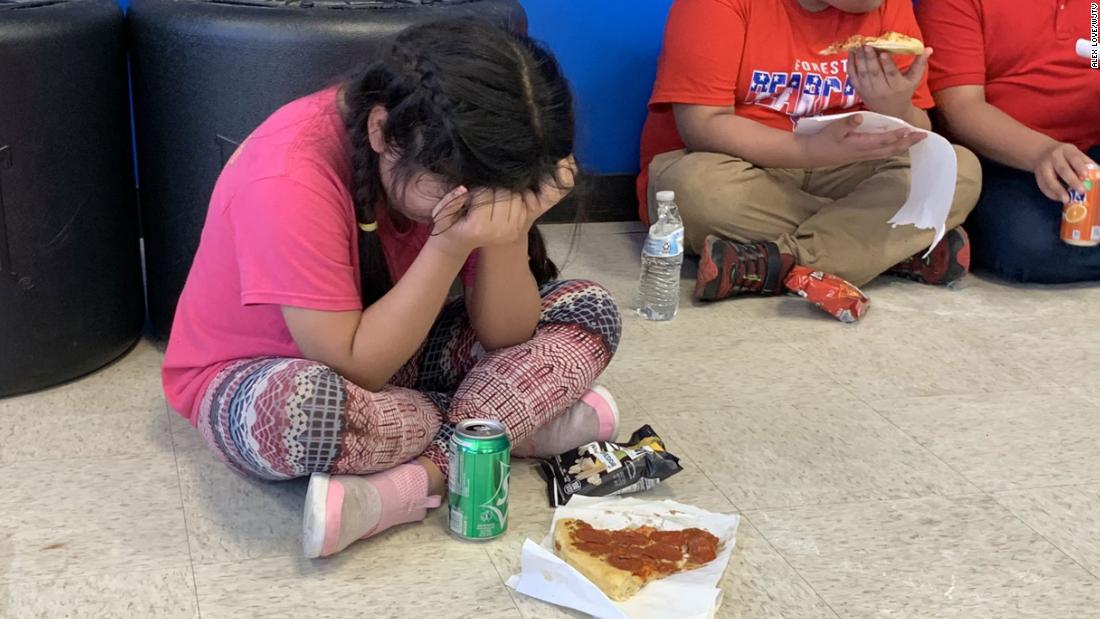 For the first time in his 18 years in the US, he’s been able to spend time with his five children in Carthage — a small town in central Mississippi.

And he was able to attend his daughter’s 15th birthday quinceañera, sharing the traditional first dance with her — with a government-issued GPS monitor strapped to his ankle.

“It’s really the first time in all the years I’ve been here that I’ve been … at home,” said the immigrant worker, who requested anonymity because he doesn’t want to risk being separated from his family. “When we come to this country all we do is work. Family is not always the first priority.”

In communities hit hard by the pandemic, they wore masks and stood apart from each other. The locations were announced last minute and only within a close-knit network, for fear of more detentions by agents from US Immigration and Customs Enforcement.

Many appeared online, especially undocumented workers who were deported or who self-deported after the raids. Benigno, who had been a longtime resident of Morton, Mississippi, joined the vigil via a livestream from the southern Mexican state of Chiapas. He was surrounded by his US-born, English-speaking children.

The sweeps generated international headlines. Hundreds of young children were separated from their parents on the first days of the school year. Videos of heartbroken kids crying and begging for their parents flooded social media. Advocates denounced the operation as another cruel immigration policy ploy that punished children for political gain.

“This was about way more than 680 people,” said Lorena Quiroz, an organizer with the Immigrant Alliance for Justice and Equity of Mississippi. “There are the folks who lost their jobs after the raids. The traumatized children whose parents were held in detention centers for months. The economic impact in all these different towns. Thousands were affected.”

“Be patient. Rome wasn’t built in a day and most prosecutions of immigration crimes are not completed in just one year,” said Mike Hurst, US Attorney for the Southern District of Mississippi.

The ongoing investigation has so far led to 126 indictments and 73 convictions of undocumented workers, according to ICE. The charges include stealing the identities of American citizens, falsifying immigration documents and illegally reentering the country after having been deported, among other crimes.

The 42-year-old immigrant from Guatemala said it didn’t bother him that food plant executives haven’t been charged.

“They gave us the opportunity to work,” he said. “I am grateful… Even if it’s work people from this country don’t want. It’s hard to judge the plant executives.”

‘The worst part was thinking of your children’

On August 7, 2019, hundreds of workers were slaughtering, plucking, cutting and deboning chickens on the lines of seven plants in central Mississippi, as they did most days. Federal agents burst into the plants and picked out Latino workers for questioning about their immigration status.

“We thought it was a fire drill,” said the 42-year-old undocumented immigrant from Guatemala. “But immigration agents were waiting for us in the break room.”

He had heard of these ICE roundups many times but had never experienced one.

“You saw the sadness and nervousness and desperation on the faces of my friends and coworkers,” he said. “And the worst part was thinking of your children. Are they home? Are they in school?”

Workers suspected of being in the US illegally were packed into buses and delivered to immigration facilities for processing.

In the hours after the raids, authorities said some 300 undocumented workers detained in the operation had been released on humanitarian grounds. Many were parents who were reunited with their children. Federal officials pushed back against accusations they were deliberately harming children.

For hours, anxious friends and family members of detained workers huddled outside gates to the poultry plants, clamoring for information.

Most of the undocumented workers were released pending immigration hearings. Many were required to wear GPS ankle bracelets and to report to federal authorities each month. The same buses that hauled them away dropped them off at their former work sites.

“My daughter was sleeping when I got home,” said a Guatemalan immigrant who asked to be called Maria, not her real name, for fear of reprisals.

This was one of several times she broke down this weekend during a phone interview in which she described her detention and its aftermath.

“She woke up and hugged me. She said, ‘I thought you had been deported,'” the undocumented worker said of her 13-year-old daughter. “It was her first day of school. She fears they’ll come back for me.”

In February, she said, police arrested her for leaving the scene of a minor car accident. Her car was sideswiped. She said she drove home after the other car fled. Police turned her over to ICE agents.

With the help of activists, Maria said, she was eventually released with an anchor monitor that occasionally buzzes and wakes her at night.

“It feels like they’re always watching me,” she said. “I’m afraid to leave the house.”

The day of the accident she had just picked up a cash donation from a church. Many undocumented workers have depended on the largesse of church and activist organizations. But funds raised in the last year have been dwindling, activists said.

“I know many people don’t want us here but there are some good people willing to help you,” she said, weeping again.

Maria is helping organize a cooperative of former chicken plant workers now scratching out a living cleaning homes and landscaping.

“The fear is there. The trauma is there, but now our people are seeing hope that they can do something,” said Quiroz, adding that immigrant and labor movements are unusual in the Deep South, especially in Mississippi.

Pricila Mateo’s mother was also detained, and a year later she still fears she could be taken again — the way ICE picked her up at a Canton, Mississippi, food plant.

“I worry about ICE going home to home in the Hispanic community,” she said. “We don’t know.”

Angela Stuesse, an associate professor at the University of North Carolina and author of “Scratching Out a Living: Latinos, Race, and Work in the Deep South,” said the rural South has long been hostile to organized labor and immigrants.

“This has been a unique opportunity for the community to become more visible and to come together both following the raids and in the moment of COVID-19,” said Stuesse, who organized Mississippi agricultural workers for six years.

Maria does not have a date for an immigration hearing yet. She reports to immigration authorities every couple of months, she said. Her next meeting is in October.

First the raids, then a pandemic

The coronavirus crisis has resulted in delays of immigration hearings for the food plant detainees.

“The pandemic has prolonged the wait,” said Luis Espinoza, an organizer with the Mississippi Immigrants Rights Alliance. “They have not been able to work. They don’t have firm dates for immigration hearings. They are in a state of limbo.”

Mississippi, with a relatively low population, has the country’s fifth-highest recorded coronavirus case count per 100,000 people, behind only Louisiana, Arizona, Florida and New York.

“They have no peace, especially now with the coronavirus,” said Father Roberto Mena of St. Michael Catholic Church in Forest, Mississippi. About 150 parishioners were swept up in the raids, he said.

Activists said some undocumented workers have self-deported because of the pandemic. Without medical insurance, some who became ill turned to herbal remedies from their homelands, they said.

A food plant worker recently deported to Guatemala was forced to quarantine for weeks outside his hometown, where residents feared he could spread the virus, according to Father Odel Medina, pastor of St. Anne Catholic Church in Carthage, Mississippi.

Quiroz said, “Because of the stigma, they’re chased out of towns or threatened for bringing the virus to Guatemala.”

Still, when stay-at-home orders were in place in the state, some poultry plants erected signs outside their gates praising the “heroes working here,” she said, sharing a photo of one sign.

Quiroz also shared a copy of a letter some plants distributed to workers during the height of the pandemic. Addressed to local law enforcement, the letter asked that the “essential” employee be allowed to travel freely to and from work. It called the bearer a “critical infrastructure industry employee” whose duties were “vital to the American people during this emergency.”

“At least the Covid-19 crisis served to reveal how valuable our people are in putting food on the tables of US citizens,” Father Medina said. “Our communities have been hardest hit by the pandemic. They don’t have the luxury of staying at home.”

The 42-year-old Guatemalan immigrant and father of five said the pandemic pushed his immigration hearing to 2023. It’s bought him time with his kids. He reports to immigration authorities each month. His ankle monitor has been replaced with a phone tracking device. He obtained a one-year renewable work permit and just started a night shift as a mechanic in a chicken plant.

“We didn’t even exist not long ago,” he said.