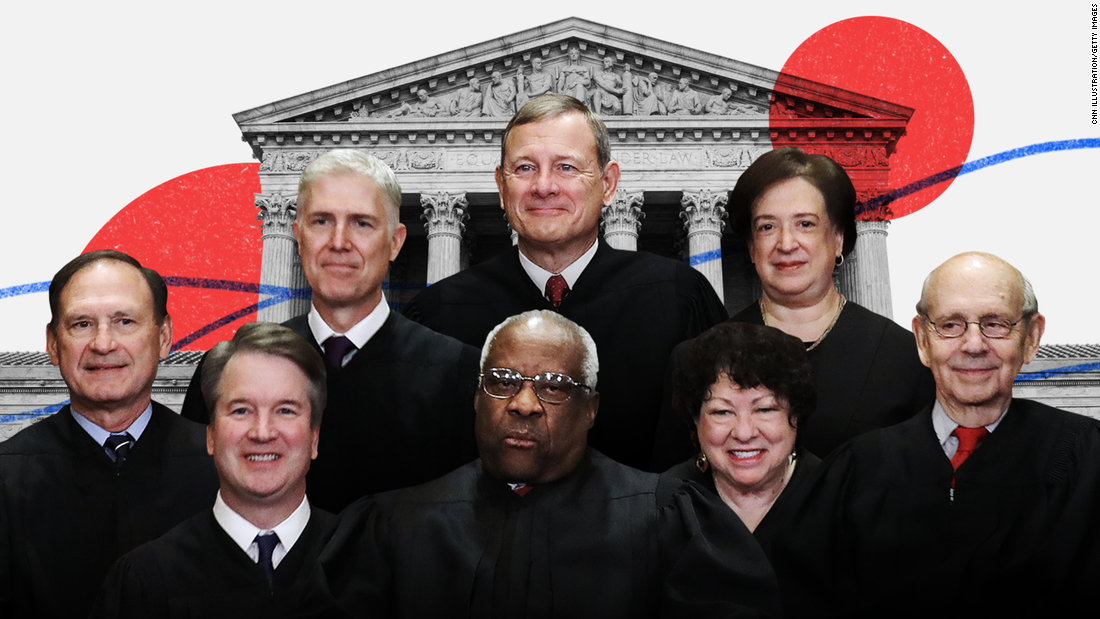 The justices are still working remotely because of Covid-19 and telephonic arguments will be livestreamed.

Although there are significant cases pending, the docket has been eclipsed by the furor over the future ideological direction of the court and its institutional reputation. Chief Justice John Roberts, who since the retirement of Justice Anthony Kennedy has served as a swing vote in some cases, now stares down a future where he will play a less pivotal role at times with the possibility of five solid votes flanking his right.

Roberts’ goal of keeping the court out of the political fray will also grow more difficult as the public sees yet another judicial confirmation hearing roiled by politics, and a President who has suggested that his new nominee could decide the election.

“This will be no ordinary term,” said Roman Martinez, a Latham & Watkins lawyer and former Roberts clerk who frequently argues before the court. “The confirmation fight over Justice Ginsburg’s successor has thrust the court center stage during a tough presidential election, and the spotlight will only get hotter if the court has to weigh resolve election-related disputes.”

As the justices gather over the phone for the first sitting, Senate Republicans continue to move quickly to confirm Amy Coney Barrett, Trump’s nominee to replace Ginsburg. Majority Leader Mitch McConnell and Senate Judiciary Chairman Lindsey Graham have vowed to keep a tight schedule that could lead to a confirmation vote by the end of October.

Barrett’s confirmation process is also happening in the shadow of a corornavirus pandemic and the White House event on September 26 where she was announced as the nominee appears to have been a superspreader event leading to several people, perhaps even Trump and two Judiciary Committee members, contracted the virus. (Barrett herself had Covid-19 earlier this year and recovered.)

“It’s critical that Chairman Graham put the health of senators, the nominee and staff first — and ensure a full and fair hearing that is not rushed, not truncated, and not virtual,” the Democrats said in a joint statement. “Otherwise this already illegitimate process will become a dangerous one.”

If Republicans are able to confirm Barrett before the election, she would take the bench just as several emergency petitions concerning the right to vote could be flooding the court in the last days of the campaign. In order to rule on a pending case or petition, she has to be on the bench when it arrives. Various lawsuits are percolating in lower courts concerning issues like mail in voting and witness signature requirements. Meanwhile, the President has insinuated that Barrett’s vote will be necessary if the court were ultimately called upon to decide the election.

“Lurking in the background is the possibility that this could become the most tumultuous and divisive term since the Supreme Court decided Bush v. Gore 20 years ago and effectively determined who would be president of the United States,” said Irv Gornstein of Georgetown Law.

A week after the election, the justices will hear the most significant case on the docket so far that could impact millions of Americans.

For the third time, a significant case concerning the future Affordable Care Act will be heard on November 10. Although the final results may not be tallied from the election by then, the justices will hear a dispute that could strip health care for Americans across the country in the middle of a pandemic.

And while the President has repeatedly said he would move to protect individuals with preexisting conditions, while offering no concrete details, his government’s lawyers are arguing to have the entire sprawling law invalidated.

All eyes will be on Roberts, who, back in 2012, stunned conservatives by casting the deciding vote to save the health care law under the taxing power. But the new dispute arose in 2017 when the Republican-led Congress cut the tax penalty for those who lacked insurance to zero as part of the year-end tax overhaul.

Texas and other Republican-led states sued, arguing that since the mandate was no longer tied to a tax penalty, it had lost its legal underpinning. What’s more, the challengers also argue that the mandate cannot be untangled from the other provisions of the law, and that the court should move to get rid of the entire thing. Justice Department lawyers side with Texas, although they have made a new argument that while the entire law should fall, the ruling should only apply to the 18 states that brought the challenge.

A district court invalidated the law but last December, a federal appeals said that while the individual mandate was unconstitutional, a lower court should take another look at whether provisions unrelated to the mandate should remain on the books.

On November 4, the morning after the election, the justices will hear a major dispute pitting claims of religious liberty against LGBTQ rights in a case that is a follow-on to a 2018 dispute concerning a baker who refused to make a cake for a same sex couple.

In the new case, the city of Philadelphia froze the contract of a Catholic foster agency because the agency refused to work with same sex couples as potential foster parents out of religious objections to same sex marriage. The agency, Catholic Social Services, sued under the First Amendment, seeking an exemption from the law.

Philadelphia defends its actions saying the agency violated anti-discrimination laws that are neutral and apply to everyone.

The Trump administration is siding with the Catholic agency arguing that the city singled out the organization for investigation and reflected unconstitutional hostility toward its religious beliefs.

Supporters of religious liberty hope the court’s conservative majority, expanding upon a trend from last term, will broaden religious liberty rights under the Free Exercise Clause of the Constitution. But supporters of LGBTQ rights, wary of the court’s conservative turn, worry the justices may rule in favor of discrimination, allowing the agency that receives government funds to turn away LGBTQ couples.

Also on the docket is a case concerning a challenge by the Democratic-led house that seeks the release of grand jury material from former special counsel Robert Mueller’s report into alleged Russian interference into the election.

The material at issue includes portions of Mueller’s report that were redacted to protect grand jury information and underlying grand jury testimony and exhibits that related to certain individuals and events described in the report.

And while the docket doesn’t compare to last term’s blockbuster cases on Trump’s financial records, a Louisiana abortion law and a case brought by LGBTQ workers, there are other petitions pending that could ratchet up the significance of the term. Those include a challenge to Trump’s border wall, cases concerning whether Trump violated the emoluments clause of the Constitution, and another abortion case out of Mississippi.