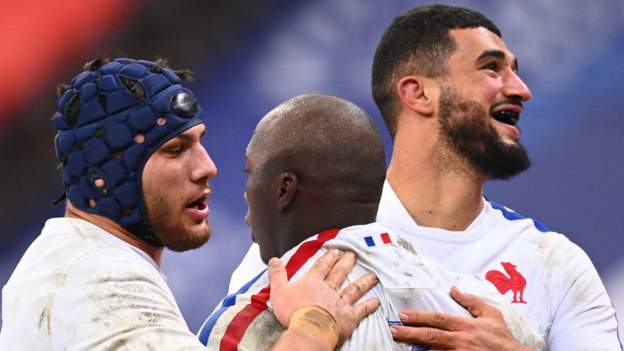 A young France side missing most of their top stars have no hope of beating England on Saturday, says former international hooker Benjamin Kayser.

French clubs have limited players to only three international games over the extended autumn Test window.

And first-choice options like Antoine Dupont and Virimi Vakatawa have reached the limit and are unavailable.

“England is a little too far ahead, it is a bit of an impossible task,” Kayser told Rugby Union Weekly.

“It is a matter of fronting up and showing they can challenge such a good team like England.

“They won’t get a hiding, there won’t be 40 points between the two teams, definitely not. But the step is just a little bit too high.”

The absence of coach Fabien Galthie’s more experienced players for the Autumn Nations Cup final means that several graduates from France’s recent highly successful under-20 teams will be promoted at Twickenham.

“I can’t wait to see them against England,” added Kayser. “Some guys in there are mega good, they deserve a shot.

“Killian Geraci, the second row, is like [Wales captain] Alun Wyn Jones. He has a great work rate, he is fantastic in the line-out.

“[Flanker] Sekou Macalou is going to explode at international level. Anthony Jelonch, the number eight, is very good. We haven’t seen half of what [wing] Alivereti Raka can do yet.

“[Wing] Gabin Villiere, who scored a really good try against Italy, was playing in the third tier, three years ago. He got picked up by Toulon and he is killing it.

“There are some really cool prospects who are finally coached in a positive international-based type of training.”

Former Wales defence coach Shaun Edwards is part of Galthie’s staff and Kayser believes that the rugby league legend has been key in France’s recent improvement.

“You cannot underestimate the impact he has had on French defence, but the mindset as well,” added Kayser.

“Edwards bought into the passion of France, this way of coaching. He doesn’t need to speak a lot, because he is screaming all the time!

“Whether it is is French, English, whatever, the guys get what he means. He lives in Perpignan, he is properly committed to it.”

Brought back to the game by a steel beam

Kayser, who won 37 France caps and spent three seasons with Leicester during his playing career, never intended to move into coaching after hanging up his boots.

However, after moving to Kent, the 36-year-old was lured back to the game by a chance encounter and a problem with an extension at his new house.

“We needed to fit two steel beams, each weighing 1.1 tonnes, and the builder’s crane couldn’t get round the side of the house,” Kayser explained.

“Earlier I had got a message from the coach of Tunbridge Wells welcoming me to the area, telling me to give him a shout if I needed anything. So I tried my luck and texted him.

“Wednesday morning, it was pouring with rain and there were 10 blokes from Tunbridge Wells Rugby Club waiting outside my house.

“They helped me get that beam up so I said I would come down the clubhouse and buy them some beers.

“I thought I would never coach, but the brotherhood of rugby does not have any borders.”