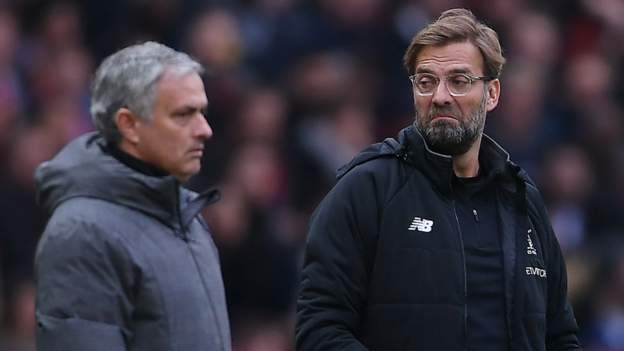 Liverpool manager Jurgen Klopp says he is very impressed with how Jose Mourinho has turned Tottenham into a “results machine”.

Klopp’s defending champions host Mourinho’s side – who top the table ahead of the Reds on goal difference – in the Premier League on Wednesday.

“The way they play this year is really good,” said the German.

“Counter-attack is not their only strategy; they are a proper footballing side.”

Former Chelsea and Real Madrid boss Mourinho has been in charge of Spurs for little more than a year after replacing Argentine Mauricio Pochettino.

It is the Portuguese manager’s first job since being sacked by Manchester United in December 2018.

Spurs had slipped to 14th in the Premier League when he took over and were without a win in their previous five games.

Mourinho helped lift them to sixth place by the end of the coronavirus-delayed season, enjoying even greater success so far this campaign, with Spurs losing just once in the league.

“Mourinho showed obviously some comeback skills, if it was that. Very impressive, what he has done at Tottenham,” Klopp said.

“He has turned them into a results machine.”

In response to Klopp’s comments, Mourinho said results had been “very positive” but added it was “too early” to talk about his side in such terms.

“The period of good results is a few months; a results machine is much more than that,” said Mourinho.

“A results machine is what Liverpool have been for a couple of years. A results-machine is what my Chelsea team was when we won two consecutive titles [in 2005 and 2006].

“But these 390 days are fake because lots of these days were not of work, they were of quarantine.

“So for us to compete at the level we are doing, I can only give credit to the players and be very happy with what they are doing.”

Spurs have the best defensive record in the English top flight this season, having conceded the fewest goals (10) and earned the joint-highest number of clean sheets (five).

But their attacking threat has also caught the eye, with forwards Harry Kane and Son Heung-min linking up very effectively.

Between them, the Spurs pair have scored 19 goals and provided 14 assists in the Premier League this season.

“You cannot be top of the league with only counter-attacking,” said Klopp.

“Unfortunately, if we keep them [Son and Kane] quiet, they still have a lot of really good players with threats from a lot of areas on the pitch.

“Steven Bergwijn plays an important role in counter-attacking moments. Tanguy Ndombele needed a bit longer to settle at Tottenham, but he’s now 100% there.

“Giovani lo Celso, Moussa Sissoko, Pierre-Emile Hojbjerg is a proper unit in midfield. It works well together. And Gareth Bale [when he is] fit again is another threat.”

Covid: Volunteers in Maesteg clear snow for vulnerable to get vaccine