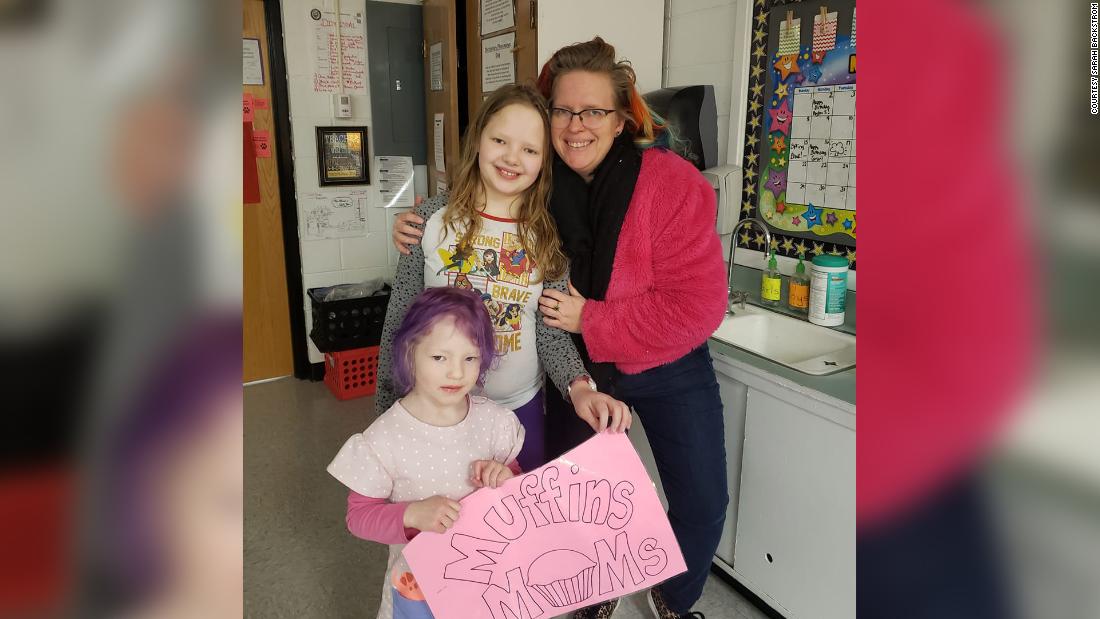 So, in addition to all her back-to-school preparations this summer, Backstrom wrote her own obituary and sent it to Gov. Kim Reynolds’ office.

“It wasn’t something at all that I took lightly. It was something that I really hoped that my governor would read and hear that if something were to happen to me, that this is who is no longer here,” she told CNN. “I’m hoping that she will start to realize that these are real people, and these are real lives.”

In her obituary, which she provided to CNN, she wrote, “Sarah loved her friends and family with her whole heart. She had a laugh that was infectious and could always be counted on for an off-hand remark or a joke. She was known for finding sunshine even in the darkest of times.”

Backstrom, 43, said that she was known for her “rainbow hair and eccentric fashion sense,” and urged her friends and loved ones to wear leopard prints or a funny T-shirts and rainbow wigs to celebrate her life.

She will be teaching gifted students at three elementary schools, and recently found out that her work will be 100% virtual to minimize the risk of her tracking the coronavirus from building to building.

Backstrom said she loves being in the classroom and is sad that she won’t be able to greet her students with hugs and enjoy the back-to-school rituals that are so important to children.

“There’s really nothing that can take the place of face-to-face talking with a student,” she said. “There’s something really magical that happens in a classroom when you’re all in this space and kind of sharing energy.”

She and her ex-husband also have two daughters going into preschool and fifth grade, so she knows firsthand how tough home schooling is on parents.

Gov. Reynolds released guidance July 30 that said at least half of schools’ instruction must be conducted in person and that schools couldn’t request online-only education unless their county’s positivity rate is 15% or higher.

Iowa has reported 46,656 cases across the state and a 9.4% positivity rate as of Tuesday, according to the Iowa Department of Health.

On Tuesday, Gov. Reynolds said that school districts that hold online-only instruction without authorization would be defying state law and that those days would not be counted as instructional days.

“Children need to be in a classroom,” she said in the news conference.

Gov. Reynolds told reporters that she appreciates educators’ concerns, and that the state is doing everything it can to keep everyone safe.

“I have grandchildren that are going back to school. I would never do anything that would put them in harm’s way intentionally. I don’t think any of us would,” she said, adding that her daughter, who’s expecting, is a teacher in the state.

President Trump has also called for schools to reopen in the fall, but many of the country’s largest districts are planning for remote learning.
Backstrom said she was inspired to write after reading an article about Sioux City teacher Jeremy Dumkrieger, who published his own obituary in the Iowa Starting Line website.

In it, he joked about his wife’s cold feet and wrote that “his only regret in life was not meeting her sooner, frozen feet and all.” He also expressed his love for their children and their dachshund Steve.

More seriously, he wrote that because of Covid-19 “he died alone, isolated from the family who meant the world to him.”

He said putting his feelings for his wife and kids on paper was more emotional than he expected, and he got a little choked up talking about it.

“It took me a couple days to write it,” he said. “It was tough, and I know a lot of teachers that told me that they started writing, but then stopped because they just couldn’t get through it.”

Dumkrieger said he has heard from some people who were offended by his mock obituary, but said they’ll be even more upset when they start seeing real ones for teachers who actually die.

He feels that a mask mandate would reduce the spread of Covid-19 in the community and make it easier for schools to protect their students, teachers and staff.

Dumkrieger said he considered looking for a different job, but said teaching is what he loves and it’s how he serves his country.

“I’m going to go back and teach. I’m going to wear a mask and make sure I’m keeping everybody safe,” he said.

CNN’s Kay Jones and Nakia McNabb contributed to this story.

Zeta Turns Into Hurricane and Threatens to Dump Torrential Rains