The 2020 Six Nations is set for a delayed but dramatic finale on Saturday with three teams still able to win the title.

Ireland, England and France all have the chance to win the championship – seven months later than originally scheduled. – with France hosting Ireland in the final match of the day.

Here are the remaining fixtures, coverage details and the permutations for each team to become champions.

After beating Italy on Saturday Ireland have the most straightforward equation. They are the only team with their fate entirely in their own hands.

If Ireland earn a bonus-point win over France in Paris – achieved by scoring four tries or more – they are guaranteed to win the title.

They could still win the title with a four-point, non-bonus-point win.

With England expected to achieve a bonus-point victory over Italy, this would most likely come down to points difference.

Ireland’s points difference is currently 23 points better than England so, if Ireland win with four points and England five, Ireland would still win the title as long as England’s margin of victory was not 24 points greater than Ireland’s.

Ireland would also be champions with a four-point win over France if England failed to get a winning bonus point, lost or drew with Italy.

If Ireland lose they cannot win the title.

England are the most likely champions.

They will win the title if they beat Italy with a bonus point and France beat Ireland, unless Les Blues earn a bonus-point win and secure a margin of victory two points greater than England’s.

If England win with a bonus point and Ireland beat France without a bonus point, the title would come down to points difference.

England’s points difference is 23 points worse than Ireland so in that instance they would need to beat Italy by a margin of 24 points more than Ireland’s win.

England would also win the title by beating Italy without a bonus point if France also beat Ireland in the same fashion, as long as France’s margin of victory was not two points greater than England’s.

England will be champions if they win and Ireland and France draw.

If England lose or draw against Italy, then a win of any description or even a draw for Ireland would see them lift the title.

For France to win the 2020 Six Nations they must beat Ireland and better England’s result against Italy.

If France and England achieve the same result, ie a four-point or five-point win, then France must overhaul England’s points difference total.

France currently trail England’s points difference by two so would need a margin of victory three greater than England’s.

If teams finish tied on points and points difference then the championship will be decided on number of tries scored. France have scored 13 to England’s nine.

What about the women’s championship? 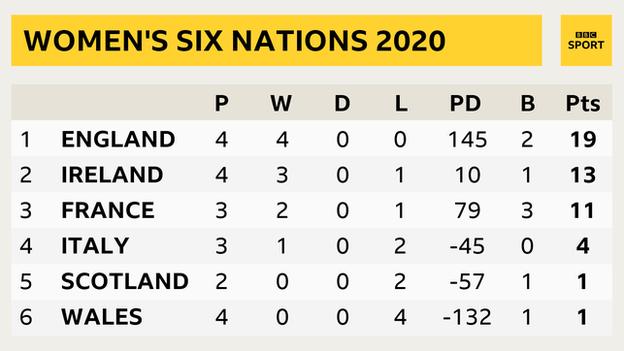 In the women’s championship, France are the only team who can deny England a second successive title.

Les Blues have a game in hand – on Sunday against Scotland – but unbeaten England know if they beat Italy on Sunday, 1 November (17:00 GMT) they are guaranteed to win the trophy and seal back-to-back Grand Slams.

If France lose against Scotland, or Ireland next Sunday, England will be champions even before meeting Italy.

All Blacks gain revenge over Argentina