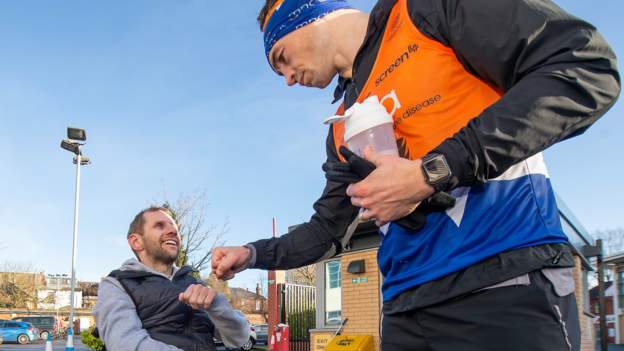 It was an embrace they had shared many times before.

Kevin Sinfield, the Leeds Rhinos captain. Rob Burrow, the little man with the big heart belying his size among giants. Tasting the joy of victory in Grand Final and Wembley showpieces.

The aching limbs and throbbing, twitching muscles, all forgotten in a hug, a coming together of friends, team-mates, warriors.

Only this time it was different. Burrow’s battles now go far beyond ducking and weaving between hulks trying to take him down. Motor Neurone Disease is his adversary now.

Sinfield ran seven marathons in seven days in support of his former team-mate and the MND Association, raising £1.2m shortly after he crossed the finishing line for the final time on Monday.

That smashed the former England playmaker’s initial target of £77,777, a nod to the number seven shirt which Burrow wore for Leeds during his 17-year rugby league career.

The hug they shared after one leg of the challenge was evidence of their bond, a reminder just how special friendship is.

“I’m overwhelmed, it’s unbelievable and I’m so happy we got it done,” Sinfield said after he crossed the line in Saddleworth on day seven.

“After the first day I did worry we’d bitten off more than we could chew, but the donations and the support just fuelled us, it’s overwhelming.”

Getting up in the early hours to run in snow, sleet, wind and darkness, all made worth it by the donations and well-wishes he and his support crew received on their journeys.

“My wife asked me if someone offered to double it would you do it again? And in an instant I said ‘yeah, absolutely,” the 40-year-old added. “I’m busted and broken now, but it’s what mates do, they look after each other.

“The group, our team, have been such a special group. We are just six mates trying to make money for Rob and without being able to go away because of Covid, this has been our holiday.

“The camaraderie has been unreal, we’ll miss waking up tomorrow to get ready to go again, and in a couple of years we’ll look back with a great deal of pride.”

“I’d do the same for him” – a friendship strengthened

Both went from hopefuls to international stars, never far from each other’s side, and along with fellow home-grown players Danny McGuire, Ryan Bailey and Jamie Jones-Buchanan, helped establish the Rhinos as a champion team and became known as the ‘Golden Generation’.

There was no greater heartstring-pulling moment during the seven days than on day five, when Burrow was at Headingley to see Sinfield finish at their spiritual home.

“Rob’s been a champion and a real inspiration, to see him the other day was emotional for all of us,” Sinfield said.

“You know what he means to the Leeds Rhinos and all that team who played together.”

Burrow said of his old skipper: “Kev, from day one, has always been a role model for me, and someone who I hold in the highest regard.

“I hope you know I’d do the same for you, it means everything to me.”

Covid-19: UK records daily high of 1,820 deaths and inside the vaccine rollout

Joe Biden takes the oath of office to become US president