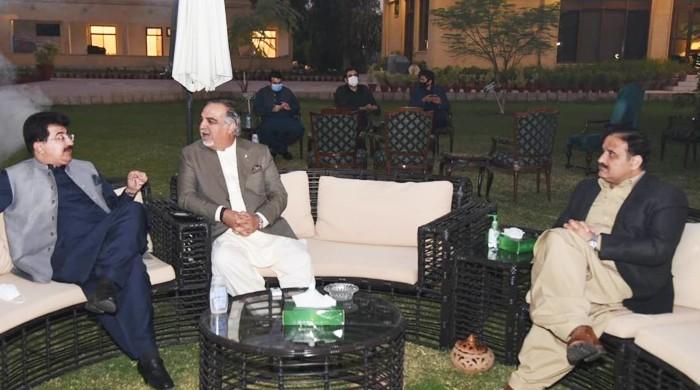 KARACHI: The Karachi package will usher in a “new era” [of development] in the port city, Governor of Sindh Imran Ismail said on Tuesday, per an official statement.

He was speaking during a meeting with Chief Minister Punjab Usman Buzdar and Chairman Senate Sadiq Sanjrani in Karachi to discuss several matters of national importance.

According to Geo News, in the statement issued by the Governor House, Sanjrani — shedding light on the proceedings of the upper house — said that legislation in the Senate is being drafted for the benefit of the masses.

Punjab Chief Minister Buzdar said that people’s confidence in the government has increased after steps were taken for his province’s development.

Per the statement, public welfare measures, issues related to job promotions, and the importance of inter-provincial harmony were discussed during the meeting.

The top government officials pledged to leave no stone unturned and take every possible step to uplift people’s living standards.

“A joint strategy is proving to be crucial for the promotion of inter-provincial harmony,” the statement said.

The officials agreed that there was a need to draft legislation for the completion of development projects and protection of public funds.

The meeting comes against the backdrop of mounting pressure from the Pakistan Democratic Movement (PDM) that aims to send the government packing.

The anti-government 11-party alliance has asked the government to step down until January 31, or else it will hold a long march to Islamabad after February 1.

PDM’s chief Maulana Fazlur Rehman, in a press conference a day earlier, announced that the alliance’s lawmakers — from the provincial and national assemblies — would submit their resignations to their respective party leaders till December 31.