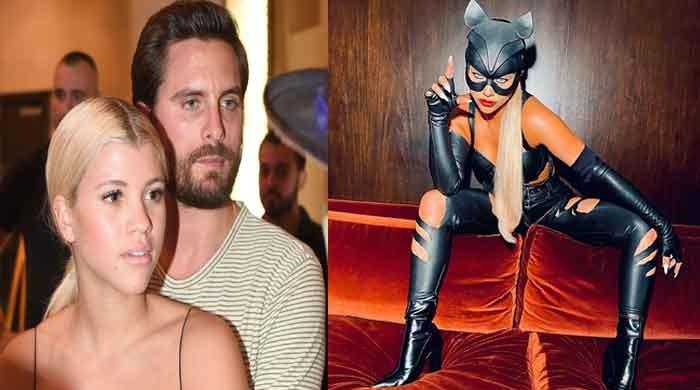 Sofia Richie sparked reunion rumours with her ex Scott Disick as she appeared in a black leather catwoman costume at Kendall Jenner’s birthday party in Los Angeles on Saturday night.

The 22-year-old model is still a friend to the Jenner and Kadashian family despite splitting from Scott Disick this summer.

Scott, who ended his years long relationship with Sofia Richie in August, has always been a staple in the Kardashian clan. He was not seen in the party , but  fans speculated that he was there and also met the daughter of Lionel Richie .

Sofia  flaunted her curves in a sunning leather outfit as she partied the night away with her pals, looking sensational in a black top with a matching mask. she also rocked a pair of fingerless, elbow-length gloves.

She was even seen enjoying a dance in a bathroom before heading out on the town to celebrate her friend’s big day.

Former couple Scott Disick and Kourtney Kardashian dated from 2006 to 2015 and have three children together: Mason, 10, Penelope, eight, and Reign, five.

‘Sofia really pushed to make things work between them after they initially broke up, but Scott officially called it off recently, and they are no longer speaking,’ an insider revealed to Us Weekly.