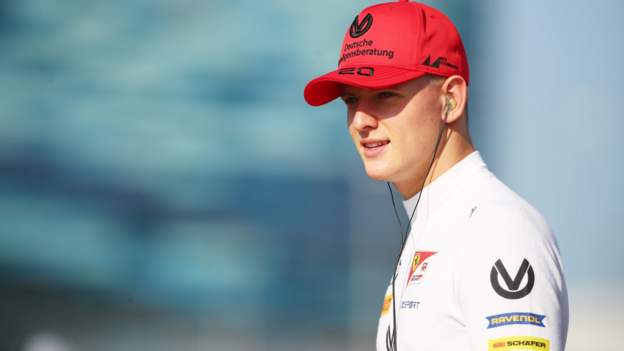 Mick Schumacher is one of three Ferrari academy drivers who will be given Formula 1 race weekend debuts in forthcoming races.

Schumacher, son of seven-time champion Michael, and British driver Callum Ilott will both drive in first practice at the Eifel Grand Prix on 9 October.

German Schumacher will drive an Alfa Romeo and Ilott a Haas. Both are Ferrari-affiliated customer teams.

The team Shwartzman will drive for has not yet been revealed.

Schumacher and Ilott are first and second in the Formula 2 championship with two races remaining, while Shwartzman is fifth.

It is expected that at least one of the three drivers will be promoted to F1 next year, with Alfa Romeo and Haas the teams most likely to take them.

In preparation for their F1 weekend debuts, all three drivers will test at Ferrari’s Fiorano test track on Wednesday in a 2018 F1 car.

Schumacher said: “I am overjoyed to get this chance in free practice. The fact that my first participation in a Formula 1 weekend will take place in front of my home audience at the Nurburgring makes this moment even more special.

“For the next 10 days I’m going to prepare myself well, so that I can do the best possible job for the team and gain some valuable data for the weekend.”

Ilott described the test as “a real privilege”, adding: “It’s amazing to have this chance at a track that is one of my favourites – it was where I scored the first podium of my career back in 2015.”

Ferrari sporting director Laurent Mekies, who is also the director of the Ferrari driver academy, said: “We wanted to organise this test session so that our three best youngsters would be as well prepared as possible to tackle an event that will always be a special moment for them.

“It will be a chance to get to grips with a Formula 1 car, which is much more complicated than the car they are currently used to driving.”

Schumacher and Ilott have already tested an F1 car, Ilott in an Alfa Romeo in a test at Barcelona after this year’s Spanish Grand Prix, and Schumacher in a Ferrari at Sakhir after last year’s Bahrain Grand Prix.

The run at Abu Dhabi on 11 December will be Shwartzman’s first time in F1 car.