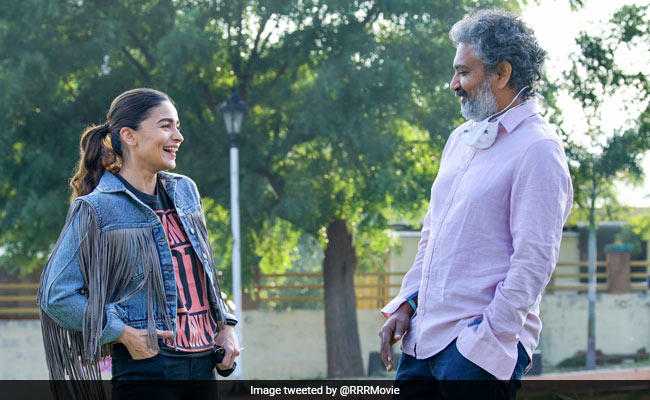 Alia Bhatt became a top trend on Twitter on Monday morning, after director SS Rajamouli welcomed the actress on the sets of his forthcoming film RRR in Hyderabad. The film also stars Ram Charan, Ajay Devgn and Jr NTR. The makers of the film shared a picture of Alia from the sets of the magnum opus and wrote: “A very warm welcome to our dearest Sita, the supremely talented and beautiful Alia Bhatt on to the sets of RRR.” Alia Bhatt  announced her association with the project in March last year in a tweet that read, “Today I feel truly grateful… Cannot wait to begin this beautiful journey with this stellar cast and massive team. Thank you S S Rajamouli Sir for giving me this opportunity to be directed by you.”

Here’s a picture of Alia Bhatt on the sets of RRR:

A very warm welcome to our dearest #Sita, the supremely talented and beautiful @Aliaa08 on to the sets of #RRRMovie! #AliaBhattpic.twitter.com/R7fSMkEkAd

The shooting of the film began in November 2018 in Hyderabad and the launch was also attended by Rajamouli’s Baahubali stars Prabhas and antagonist Rana Daggubati. The first clap for the film was given by legendary actor Chiranjeevi.

RRR, set in the 1920’s is a “fictitious story based on two legendary freedom fighters – Alluri Seetharamaraju and Komaram Bheem.” It is Rajamouli’s first project after the 2017 blockbuster Baahubali 2: The Conclusion, which was a massive success. The film will release across the globe in Hindi, Tamil, Telugu and Malayalam simultaneously. RRR was earlier to release on July 30, 2020. However, the film’s shooting was halted due to the coronavirus pandemic and the film’s director SS Rajamouli had also contracted the virus earlier this year.