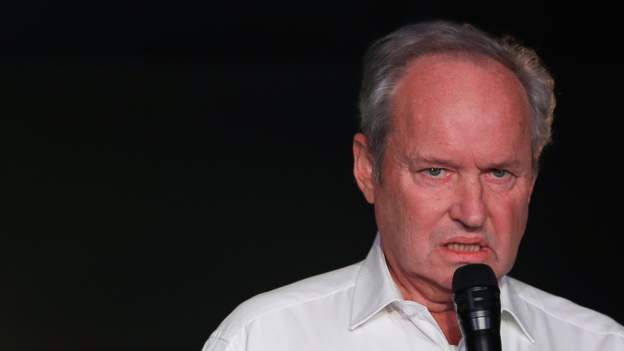 Renault Sport president Jerome Stoll will leave his position at the end of December.

Stoll was a key figure in the French car giant’s decision to return to Formula 1 as a factory team in 2016.

He had intended to retire at the end of 2018, but was asked to stay on when his replacement Thierry Koskas left Renault before taking up the position.

Renault have said there is “no replacement as yet” and did not specify whether the role would be filled.

The company’s return to competitiveness has taken longer than expected – it initially set out a plan to be winning races within five years. This year, the team scored their first podium positions since their return.

Daniel Ricciardo finished third at the Eifel and Emilia Romagna Grands Prix, and team-mate Esteban Ocon was second at the Sakhir Grand Prix.

For next season, the team will be renamed after the company’s sporting brand, Alpine, and they have signed double world champion Fernando Alonso to return to F1 after a two-year absence. He will partner Ocon; Ricciardo will move to McLaren.

The Spaniard is Renault’s only F1 world champion, having won the title in 2005 and 2006 in his first of three periods with the team.

Stoll said: “Taking up the challenge of rebuilding a Formula 1 team is tough, it takes time, commitment and unfailing determination. A first step has been taken with a team and drivers that we can now see on the podium.

“A new chapter is now opening with Alpine and I am sure the best is yet to come. I am happy and proud to have been part of this great adventure with such great people.”

De Meo said: “[Stoll’s] experience and expertise, acquired during his career at Renault, have been key assets in the structuring and progression of our F1 team.”

In addition to Renault’s activities in F1, Stoll was also responsibility for the company’s Formula E programme.

Renault’s Formula E team won three constructors’ titles and one drivers’ title with Sebastien Buemi in 2015-16. The team were rebranded as Nissan, a partner company, in 2017.