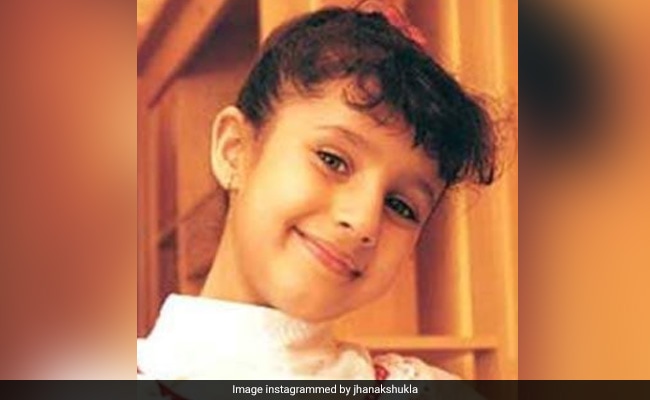 Jhanak Shukla, the actress who is best-known for playing the role of adorable robot Karisma in the TV show Karishma Kaa Karishma, has been trending on social media since Monday morning, courtesy her recent photos on her Instagram profile. Jhanak Shukla is also popular for playing the role of little Gia Kapur in Shah Rukh Khan, Preity Zinta and Saif Ali Khan’s film Kal Ho Naa Ho. Jhanak is all grown up now. She is 20. Her recent pictures on Instagram left netizens in awe. In her latest post, Jhanak can be seen lost in her own thoughts. She looks pretty in a green outfit.

Jhanak Shukla often revisits her shoot days. On Shah Rukh Khan’s birthday, she shared a still from Kal Ho Naa Ho and wrote a heartfelt note for the actor. “The ‘You made a Boo Boo’ moment! Happy Birthday to this wonderful human being, Shah Rukh Khan. PS I’m running out of pictures to post with him.” LOL. Take a look:

“Find a guy who looks at you the way Aman looks at Gia,” she wrote while sharing another still from the film featuring Shah Rukh.

Her Instagram feed also has several BTS videos from the sets of Karishma Kaa Karishma. “Kuch puraani yaadon ko yaad kare,” she captioned one of those posts.